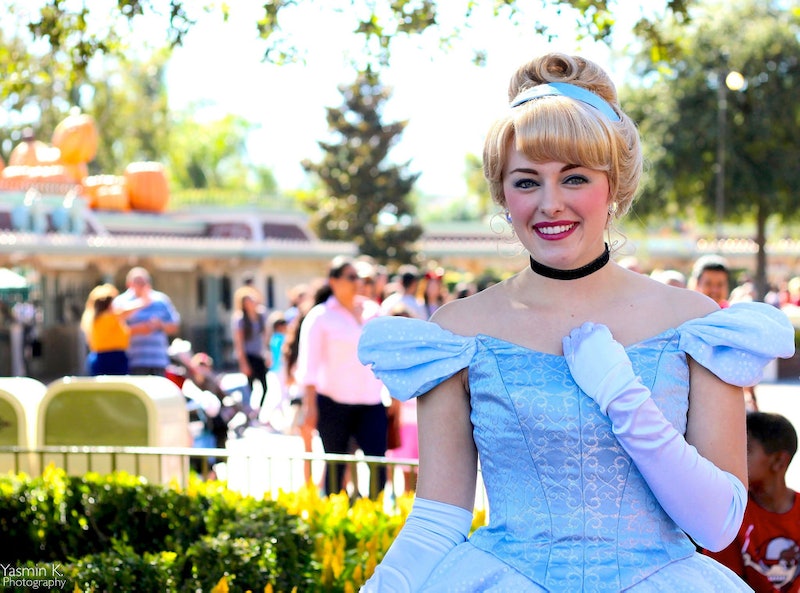 Previously, the #DearMe project for International Women's Day asked the women of YouTube to share some advice with their younger selves — but who says only people in the real world have words of wisdom to give? YouTube channel CREATURE released a Disney Princess edition of #DearMe this past Sunday (on International Women's Day itself), and you guys? It is magnificent. Equal parts funny and poignant, it shows why it's possible to be a feminist and still love Disney movies. It's all about what you take away from both the stories and their heroines.

The video shows eight different Disney princesses ranging from the classic to the modern telling their younger selves what they wished they'd known way back when — lessons they've learned from their life experiences. Sure, some of it is played for comedic effect (because let's face it: The idea is hilarious); a lot of it, though, is legit good advice. They're important lessons not only for us to take away from the stories themselves, but also for us to apply to our daily lives. For Ariel, for example, it's about not letting yourself be voiceless — and about reading the fine print. Aurora urges herself not to dream her life away. And Belle? Well, if the people around not only think you're weird, but also that being weird is bad — find some new people to surround yourself with.

Here are four of my favorites; scroll down to watch the whole video. What advice would you give your younger self?

For Jasmine, the lesson is about making your own opportunities. If you feel like you don't have a lot of choices? Give them to yourself anyway. “Don't just say you're going to 'see the world,'” she tells herself; actually travel. Also, “the truth is sexier than riches” — and perhaps most importantly, “Always choose you.”

Elsa has some words of wisdom about two topics. One of them is a riff on the good old-fashioned rule, “with great power comes great responsibility”; for her, it's “Look. Elsa. You're going to be able to play god. Stop and think if you should.” But I would argue that more weight falls on the second topic. Staying connected. “You don't have a ton of friends,” she tells herself; but, she reminds herself, “Love comes from so many places — like your family. There is help all around you,” she adds. You just have to be smart enough to ask for it when you need it.

Feel like you've got an entire army fighting against you? Maybe Mulan's advice to her younger self will come in handy. “Gender is fluid,” she says. “Being 'feminine' doesn't mean you're 'weak,' and being 'masculine' doesn't mean you're 'strong.'”Whatever you do, don't give up — and know this: “Your happy ending is accepting and loving the person in your own reflection.” Just, y'know… don't try giving yourself a haircut. As she puts it, “That shit does not end well.”

Cinderella cracks some jokes about being a party animal and reminds herself about the wonders of flats — but the real takeaway is this: “Ever stop to think you're your own fairy godmother?” You don't need someone else to work your magic for you; you're magical all on your own.