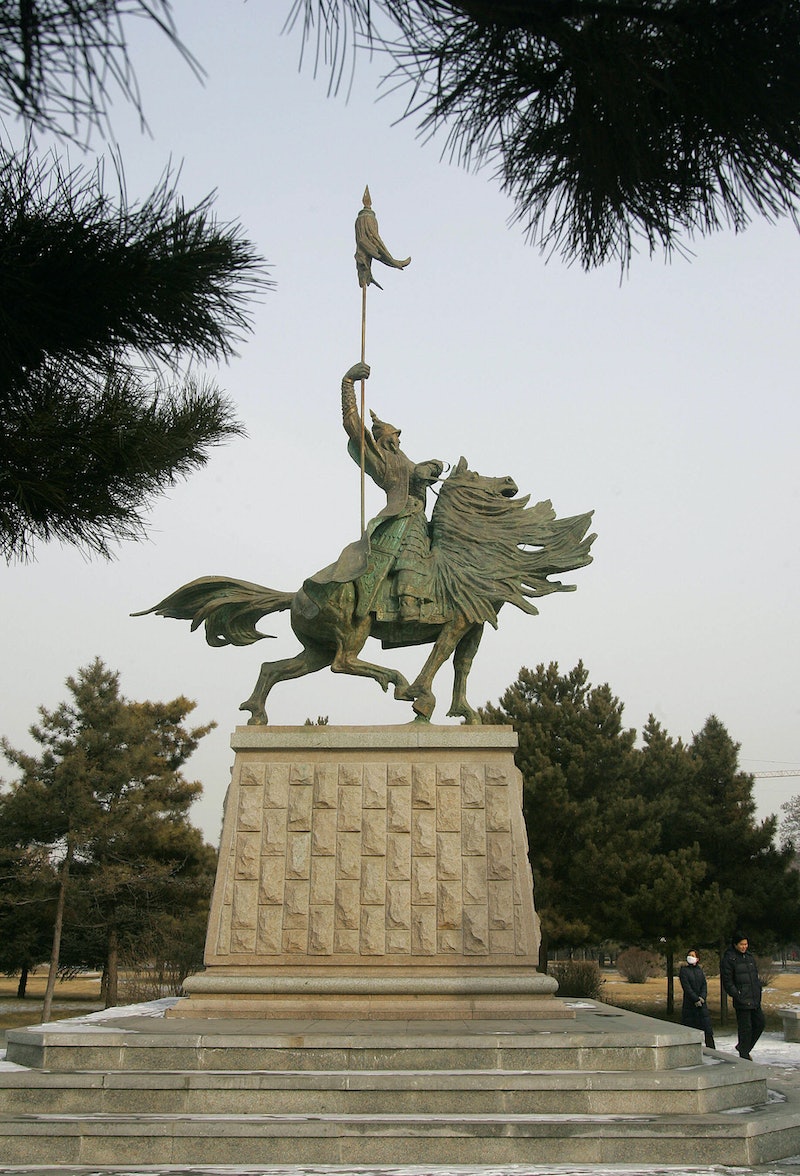 Have you ever wished your dad was as cool as, say, a viciously intelligent and crazily bloodthirsty warlord who united the Mongol Empire through a combination of brutality and religious tolerance, thereby extending its influence across an entire continent? If so, you're in luck, because statistically, you could totally be a descendant of Genghis Khan, according to a recent study in the European Journal of Human Genetics. Think about that next time you're stuck in traffic and resisting the urge to drive your car on top of the ones in front of you like a monster truck gone rogue, because you know Khan would totally approve if you gave in. (Note: I'm not saying this is a good idea. Just that it's an awesome one.)Unfortunately, these results technically only apply to the 5,000 male participants in the study, but that doesn't mean you're not descended from a line of homicidal Asian nomadic leaders. Researchers at the University of Leicester looked at the Y chromosomes of participants, aka the male sex chromosome, from 127 different populations, Science Daily reports. Although most most tend to be pretty unique, scientists found 11 common types of Y chromosomes in their participants, which led them to study their distributions and histories. The results? Asian warlords spent way more time gettin' busy than you'd think, because the chromosome types were traced back to 11 different dynastic leaders.

<img class="article-body-image" src="https://tvrecappersanonymous.files.wordpress.com/2011/10/5-4-sex-lots-of-surfaces.gif?w=500&amp;h=282" alt=""/>One of those leaders was Genghis Khan, obviously, who got it on so often that his family tree has its own Wikipedia page. Other men can trace their lineages back to the progenitor of the Qing dynasty, Giocangga, who is lesser known but just as good with the ladies, judging from his estimated 1.5 million descendants in China and Mongolia today. The other nine variations of Y chromosomes are from other nomadic leaders in Mongolia and Asia, thanks to a "trans-generation amplification effect," lead researcher Mark Jobling told Science Daily. Basically, the nomadic lifestyle makes it easy to have lots of children by lots of women, spreading their genetic material throughout their empires. Fast forward 1500 years, and these guys have millions of descendants all over Asia.Although the evidence is largely circumstantial, lead author Patricia Balaresque told Science Daily that it is "pretty convincing." Not bad for some guys who've been dead for thousands of years.

More like this
How To Fight For Reproductive Rights, Based On How Much Time You Have
By Courtney Young
The Music Industry Continues To Fail Black Women
By Precious Adesina
23 Abortion Funds In States With Trigger Bans To Donate To
By Emma Carey
How To See The Lunar Eclipse On May 15-16, 2022
By Kaitlyn Wylde
Get Even More From Bustle — Sign Up For The Newsletter