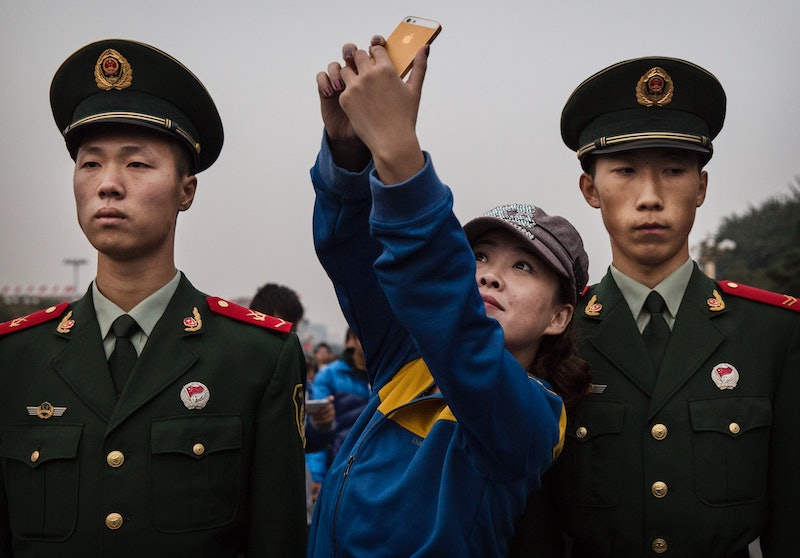 In a move that seems cunningly designed to enrage feminists everywhere, China detained 10 female activists in the lead up to International Women’s Day — for planning a demonstration against sexual harassment, no less. Five women were released after questioning, VOA News reports, but five remain in custody. The women have not yet been heard from, sparking concerns for their wellbeing and earning China a stern rebuke from the Human Rights Watch.

Sophie Richardson for HRW notes that despite placatory rhetoric and symbolic gestures — the People’s Republic has observed IWD since 1922 and played host to the United Nation’s significant Fourth World Conference on Women in 1995 — discrimination against women is still firmly entrenched in China, and this latest arrest is in keeping with the government’s trademark hostility towards activists.

Xu Ding, Yu Lian, Ai Ke, Gao Lei, and Xiao La (the five now released), and Li Tingting, Wei Tingting, Wang Man, Zheng Churan, and Wu Rongrong (the five still detained) were hardly hoping to cause a Pussy Riot-style uproar. The women, who hailed from various cities, planned to hand out leaflets about sexual harassment on public transport. They had also prepared a march against sexual harassment in a Beijing park, according to the BBC.

Usual police protocol involves a wait of only three days before the detainee is either released or charged, and one of the women has now been held for five days. This irregularity — and the fact the women’s lawyers have been unable to reach them — has caused concern. "We're worried that they're still detained," Chinese activist Feng Yuan told AP. “We don't understand how this has to do with public safety. And this goes against what the Communist Party and the government says they want to do to build a safer, crime-free society.”

Although the detentions aren't a complete anomaly (activists in China are routinely arrested for disturbing public order or on other trumped-up charges), Martin Patience for BBC News in Beijing points out that similar events marking International Women’s Day have been held in the past with no fallout — so, the current situation is somewhat surprising.

But unfortunately the atmosphere in China seems to be becoming tenser. A Chinese activist who is close with several of the detained women told Reuters that many other rights advocates had been forewarned by police in the lead up to the celebration, which was held on Sunday. William Nee, a China researcher for Amnesty International, told VOA:

We're noticing just an across the board crackdown on NGOs, civil society, and especially international organizations that fund human rights work. So within that context unfortunately this isn’t that surprising.

The situation was rendered more delicate by the fact that this year’s International Women’s Day coincided with China’s parliamentary session — the annual meeting of the National People’s Congress and its advisory group — a period during which security tends to be abnormally tight. Ironically, women’s rights are high on the parliament’s political agenda this year: The first national bill against domestic violence is due to be reviewed.

The law will define domestic violence for the first time in the country’s history, and is sorely needed. Nearly 40 percent of married and attached women claim to have suffered abuse from their partner. Campaigners in favor of the legislation say that the problem is “not taken seriously” in China, and information about escaping abusive homes remains unavailable to women.

In fact, Chinese women’s rights have arguably been eroded since the Mao era, Leta Hong Fincher writes in Dissent — with property law amendments, soaring house prices, a revival of traditional gender norms, and a state-sponsored campaign encouraging young women to marry all contributing to a drop in the social and financial wellbeing of Chinese women. Women have essentially been excluded from China’s lucrative property boom, according to Fincher, with only 13 percent of married women owning homes in their own name.

The financial and psychological consequences of this, and of the intense pressure on Chinese women to marry, are extensive and relatively unexamined. But worryingly, a 2009 report by the Beijing Suicide Research and Prevention Center found that the rate of suicide was three times higher for women than for men. The growing gender inequality in the People’s Republic is especially remarkable given the emphasis during the early Communist era on female empowerment.

And what of the women currently in custody? The five still being held are said to be either members or founders of women's rights and gay rights groups in Guangzhou, Beijing, and Hangzhou. All of them have collaborated with Yirenping, a nonprofit that champions equal rights for people with hepatitis, HIV, and disabilities. Their coordinated arrests across all three cities indicate a high level of organization from the government. A young woman in Beijing told The New York Times:

The attack this time is a big deal for us because the people who have been taken away formed the growing core of our movement these last few years. They are the core strength of the women’s activist movement.

Human Rights Watch has called for China to “immediately free the detained activists, move swiftly to adopt and enforce robust anti-domestic violence legislation, and address gender discrimination in the workplace, in access to education, and in antiquated social perceptions.”