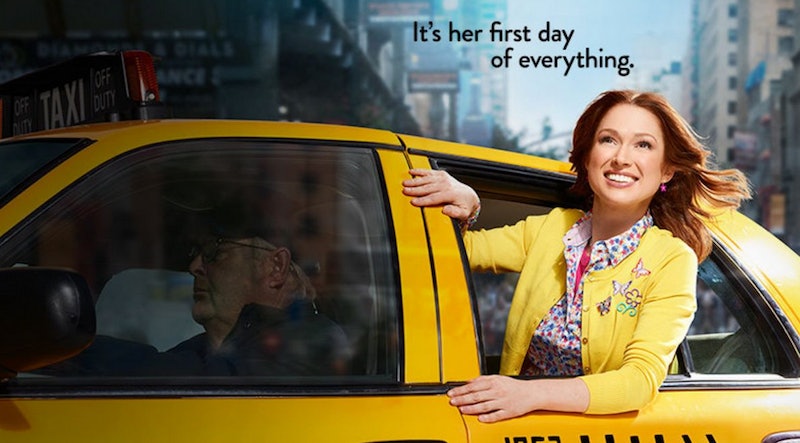 If there was one show that dominated this past weekend, it was 100 percent Netflix's Unbreakable Kimmy Schmidt. It made its debut on the video streaming service Friday, and by Sunday it was thoroughly beloved, another moment in Tina Fey's already highly adored track history and perhaps the biggest one yet for star Ellie Kemper and breakout Tituss Burgess. But while we've all memorized all the lyrics to "Pinot Noir" by now, there's something a lot of us missed in that first go-round: A ridiculously cute Unbreakable Kimmy Schmidt cameo by Penelope Richmond, also known as Tina Fey's 3-year-old daughter.

This isn't the first time Fey's daughters have made appearances in her work, but for the most part this particular cameo has slipped under the radar in all the kerfluffle over how delightful this new show is. But there it is: In episode 4 ("Kimmy Goes To The Doctor!") Kimmy goes to a plastic surgeon's office for some facial surgery to try to escape her past, but she has a bad trip on some meds as her brain tries to talk her out of it. It's in her hallucinations of the bunker she was held captive in as a teenager that Fey's youngest daughter makes her appearance: Reverend Richard Wayne Gary Wayne's head is replaced with that of a little girl, who just so happens to be little Penelope. The supposed proof lies in the supposed IMDb page, and in the fact that Fey's kids have already been all over the place, so it would actually be out of character for them not to be in their famous mother's new show. Check it out:

Here Is Penelope in Unbreakable Kimmy Schmidt As The "Full House Baby":

And Here's Elder Daughter Alice in 30 Rock, As A Young Liz Lemon....

And Again, In The Graphic For The Production Company At The End....

And Here's Alice Again, With Her Legendary Mother:

And In a Print Ad For American Express: