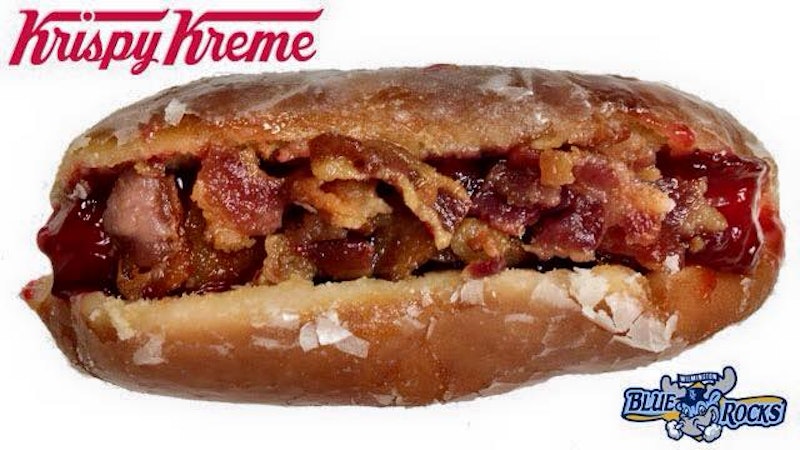 Y'know, I thought I'd gotten tired of weird food mashups; after all, there are really only so many jokes I can make about hybrid pastries or fast food partnerships. I have been proven wrong, though, by this donut hot dog thing from Krispy Kreme and the Wilmington Blue Rocks. The donut chain and Delaware-based minor league baseball team joined forces to dream the whole thing up. It consists of a hot dog lovely nestled within a bun fashioned from a glazed Krispy Kreme donut, topped with bacon and finished off with a drizzle of raspberry jam. And, well… even though I thought I'd written about my last bizarre food story for a while, I couldn't very well pass this one up, could I?

I do not follow baseball. I do not follow sports in general. Before today, I had never heard of the Wilmington Blue Rocks. But none of that matters, because look at that thing. Wilmington Blue Rocks and Krispy Kreme? I salute you — both of you. That is the most magnificently heart-stopping donut creation I have ever seen, and I would like to shove it in my mouth right this very minute. It is ridiculous, and it is probably monstrously unhealthy… and it is probably absolutely delicious. I mean, I highly doubt that I would be able to eat an entire one of them in one sitting, because good gravy, that's a lot of junk food — but still. It's all of my favorite things in one awe-inspiring package. Here — bask in its glory for a moment:

Said David Thornley, General Manager of Krispy Kreme New Castle, “Krispy Kreme New Castle is extremely proud to take our partnership with the Wilmington Blue Rocks to a new level and offer fans this very unique, sweet and savory treat. We are truly excited to see how fans enjoy this creation, and help write a new chapter in ballpark concessions in the process.” Added Blue Rocks Director of Advertising Sales Brian Radle, “The Blue Rocks are always looking for new ways to please our fans, and we think this is certainly going to accomplish that. Krispy Kreme donuts and ballpark hotdogs are two of America's favorite treats, so why not combine them?”

Why not, indeed. Alas, it does not appear that I can shove this thing in my mouth right this very minute; I'm unclear on exactly when it will be available, although I suspect that when it does descend upon us in all its donut-y glory, it will probably only be at Frawley Stadium. Siiiiiiiiiigh.

However, there's one thing missing from the whole shebang: A name. This hot dog donut creation is monikerless — but you know what? Krispy Kreme and the Blue Rocks want your help to fix that. They're currently holding a contest to bestow a name worthy of something this spectacular upon its meaty, glazed head. You've got until noon on March 17 to submit your pick; after that, six names will be chosen as finalists. The public will then vote for their favorite until March 24, and on the morning of March 25, the winner will be announced on the 93.7 WSTS WakeUp Crew morning show. The finalists will each win four passes to a Blue Rocks game during the upcoming season; meanwhile, the grand prize winner will win four tickets to opening night on April 16, $50 in stadium bucks (presumably with which to purchase many donut dogs), a commemorative plaque naming them as the person who named the donut dog, and — most excitingly — the chance to throw the first pitch on opening night.

Because I don't live near Delaware, I'll have to pass up on the chance to win; here are my donut dog name ideas, though. May they stand you in good stead, people of the Internet.

It's like a blue plate special, but better. Way, way better.

Because it looks like one. Sort of. OK, not really, but just let have this, please.

I have a soft spot for alliteration.

4. Pig in a Down Comforter

Who needs a pig in a blanket when you've got this thing on hand?

I would love to be able to go up to a ballpark food counter and say, “Yes, I'd like one Magnificent Monster, please.”

Because it is one. And WE LOVE IT ANYWAY.

But I'm sure my efforts pale in comparison to the ideas the rest of the Internet has. Whatcha got, folks?