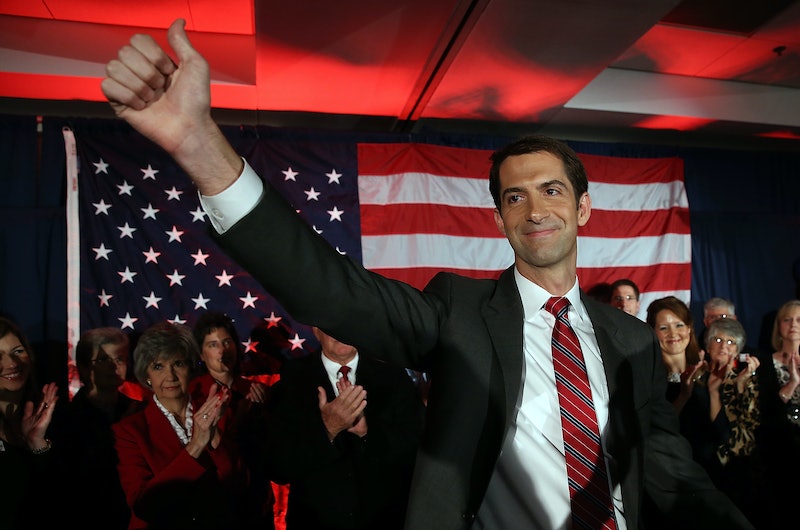 He's not just a catchy name. Arkansas Senator Tom Cotton is the GOP's newest celebrity. The young Republican — he's only 37 — is looking to make a name for himself on the national level, and he's doing it quickly. He's only in his third month as a senator, but he's already making major headlines. When Cotton wrote his now-controversial open letter to Iran, warning them not to sign a deal with President Obama regarding nuclear arms, Republicans were elated and Democrats were shocked and appalled. And considering certain things about Cotton — the letter, his voting record, certain political moves, and other shocking statements — it leaves us wondering exactly what Cotton's policies are.

The size of Cotton's hands, especially with the perspective of the above photo, isn't the only aspect of him that's extreme. In his one term in the U.S. House of Representatives (in 2013 and 2014), Cotton had voted contrary to his fellow Arkansas congressmen on 26 votes, more than any of his state's other congress members have ever stood alone — combined. The pro-life Cotton has opposed the Farm Bill, voted against student loan reform, and opposed a bill to temporarily increase FEMA spending after Hurricane Sandy. Cotton is also the only Republican Arkansan to have voted down disaster relief five times. When Cotton announced he was running for Senate in August 2013, he said this on the campaign trail:

It’s time to say enough. Arkansans need a senator who will stand with them and stand up to Barack Obama.

That year, Democratic Senator Mark Pryor said of his opponent, "I don’t know who Mr. Cotton’s been voting for but it hasn’t been for Arkansas." And in response to Cotton's letter, Secretary of State John Kerry said he was in "utter disbelief" at the letter, which he said is factually "flat wrong."

Cotton's out-there political moves are not limited to this week's bid for national media attention and, possibly, the presidency in 2020. In 2006, Cotton — who was serving in the U.S. Army in Iraq at the time — wrote an angry letter to The New York Times . The Times declined to publish the letter, which called for the imprisonment of its editors, and passed it on to conservative blog Power Line. Cotton wrote:

And, by the way, having graduated from Harvard Law and practiced with a federal appellate judge and two Washington law firms before becoming an infantry officer, I am well-versed in the espionage laws relevant to this story and others—laws you have plainly violated. I hope that my colleagues at the Department of Justice match the courage of my soldiers here and prosecute you and your newspaper to the fullest extent of the law. By the time we return home, maybe you will be in your rightful place: not at the Pulitzer announcements, but behind bars.

In February, Cotton made this shocking statement regarding the military prison at Guantanamo Bay, which President Obama has vowed to shut down:

The only problem with Guantanamo Bay is that there are too many empty cells. As far as I’m concerned, every last one of them can rot in hell.

And it isn't just Democrats who oppose Cotton's extreme views and snarky attitude. He is more of a fit with the Tea Party than with a more moderate Republican party. Senator Susan Collins, a Republican from Maine, said of Cotton's letter to Iran:

It’s more appropriate for members of the Senate to give advice to the president, to Secretary Kerry and to the negotiators. I don’t think that the ayatollah is going to be particularly convinced by a letter from members of the Senate, even one signed by a number of my distinguished and high ranking colleagues.

After analyzing his past voting record, The Atlantic wrote that Cotton has "a harsh, unyielding, judgmental political philosophy, one that makes little allowance for compassion or human weakness."

Arkansas Senator Bart Hester has introduced a bill in the state legislature that, if passed, would allow Cotton to run for a second term as Senator and the presidency simultaneously. Hester said he wrote the proposal with Cotton in mind, telling the Associated Press:

Tom Cotton would be my current idea of someone who should be afforded this opportunity.