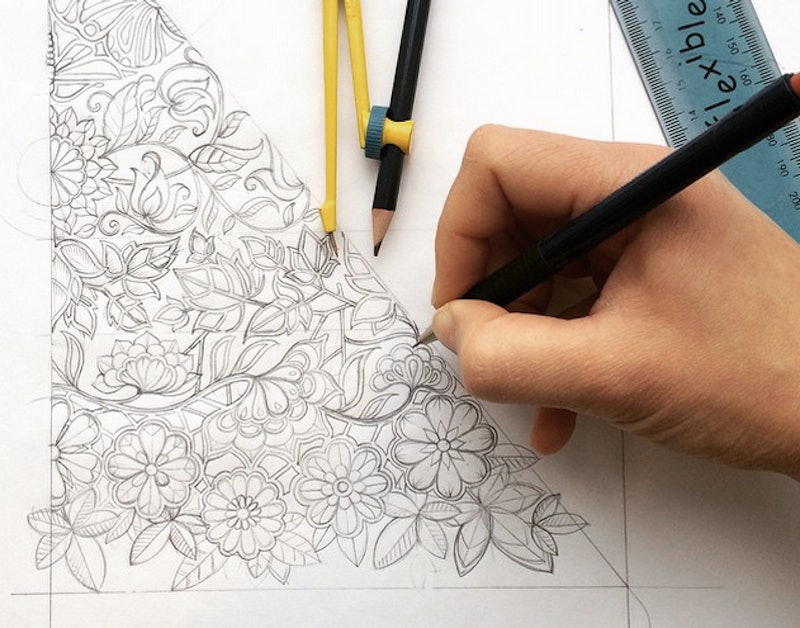 When you were a kid, coloring books provided a great way to tell the creative minds in your kindergarten class from the rule-followers. It was the staying-inside-the-lines kids versus the kids who colored the picture of the sun purple and used the orange crayon to color the grass. Remember how relaxing and therapeutic it was to just color for hours? Well, British pen-and-ink artist Johanna Basford specializes in creating coloring books (or, as they say in the UK, "colouring-in books") for adults. Her first book Secret Garden sold over a million copies, and was translated into 14 languages, according to the Daily Mail. Her second coloring book Enchanted Forest: An Inky Quest and Colouring Book has 60 new vine-filled, flowery, drawings, many of which were inspired by the landscape of her childhood home in Scotland, Basford says on her website. She prefers drawing by hand versus employing computer-generated graphics, she says, because of the small imperfections in each piece, and the intricate, hidden images within images she can create.

For me, computer generated graphics can feel cold and soulless whereas hand drawing captures a sense of energy and character which no pixel can ever replicate.

Basford started a project a couple of years ago she called "Twitter Pictures" where her followers would tweet suggestions for what should be included in the drawing, and she'd draw them. It produced some beautiful, if slightly crazy-looking works.

Watching her create something from start to finish is pretty amazing. This video shows her drawing the cover for an arts festival program, using crowd-sourced suggestions from Twitter. Extremely cool to watch and hear how much she likes the collaboration aspects of creating a new drawing from ideas she gets from tweets.

Basford is very open about her creative process, and says on her FAQ page that she begins every drawing in pencil (a particular pink Hello Kitty one), and creates large drawings which she scales down, and inks over, then scans into Photoshop for final cleaning of blemishes on the paper.

She writes that she thinks the coloring books for adults have become so popular for four main reasons: