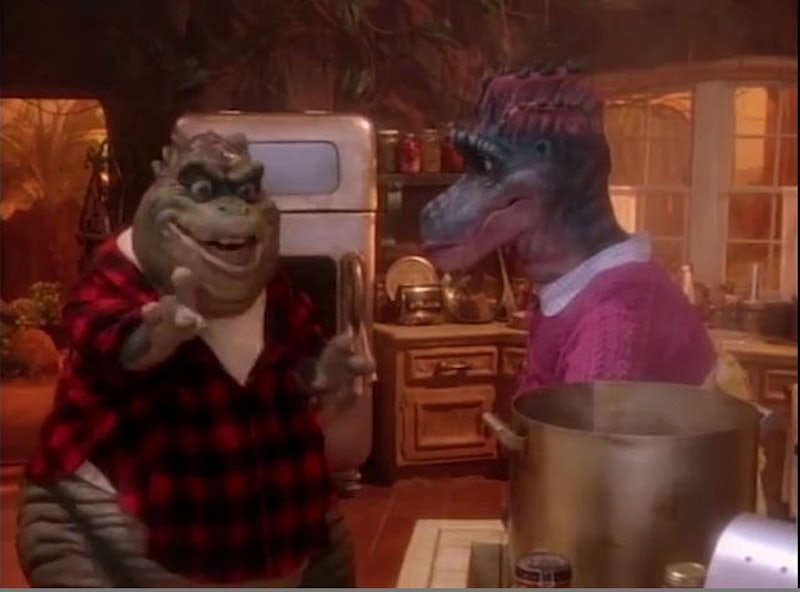 It's safe to say the world was not clamoring for a mashup of the Notorious B.I.G. singing "Hypnotize" and Dinosaurs the short-lived 90s sitcom (short-lived for good reason, in my opinion). But the internet doesn't care what we want, it gives us what it thinks we need. And the video has an impressive number of views on YouTube, so clearly it's filling that need. To recap: Dinosaurs was about a family of blue collar dinosaurs: dad Earl, mom Fran, son Robbie, daughter Charlene, mother-in-law Ethyl and the Baby, who called Earl "Not the Mama." The dinos were actually walking muppets, and the show ran from 1991 to 1994, and I actually can't believe it was on the air for that long. The idea for Dinosaurs was dreamed up by Muppets creator Jim Henson, but the show did not go into production until after he died, according to a 1991 article in The New York Times. Henson's son Brian explained his father's concept for the show to the Times:

He wanted it to be a sitcom with a pretty standard structure, with the biggest differences being that it's a family of dinosaurs and their society has this strange toxic life style

In case you haven't heard the song "Hypnotize" in a while, it's pretty much NSFW, which makes the video that much more disturbing.

I started reading up on the backstory of the show, because I remember it being not that great, but it seems like it was a staple of a lot of '90s childhoods. The dinos would sometimes run into prehistoric humans who were basically Neanderthals living in caves, which REALLY bothered me, since in addition to being the most cynical kid in the world, I was also a stickler for historical accuracy and everyone knows humans and dinosaurs did not coexist at the same time (hello, did none of you people see Jurassic Park?)

That Times article noted that Dinosaurs got a prime Friday night time slot on ABC, between Full House and Family Matters (and even if you're not able to remember the Sinclairs from Dinosaurs, I know you all remember the Tanner family and Steve Urkel).

Am I the only one who thinks the mashup of a weird family sitcom with puppets and a song by a guy who died a really violent death is a little... off? Notorious B.I.G. also known as Biggie, whose real name was Christopher Wallace, was shot to death in 1997, and his murder remains unsolved. It creeps me out to connect this goofy sitcom with a drive-by shooting, but maybe I'm the only one on the internet with zero sense of humor/nostalgia.

I think we can do better, Internet. Let's all try again tomorrow.