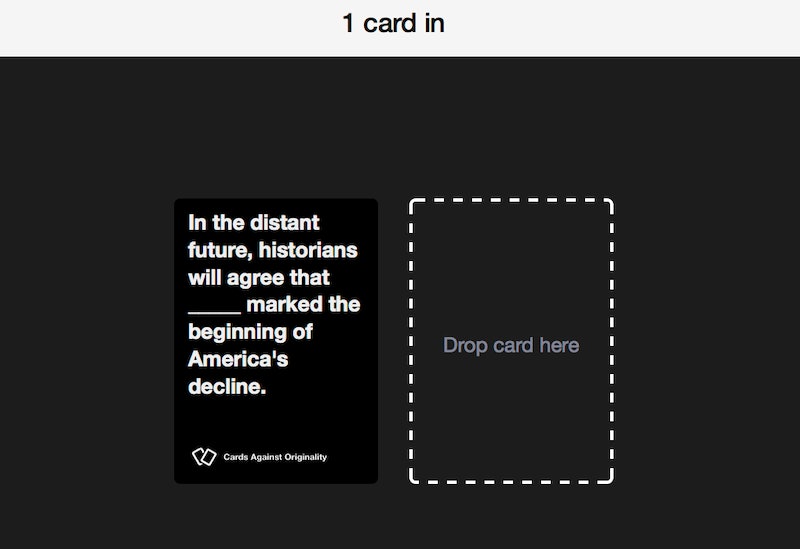 It's day two of an intermittent flash flood watch in New Orleans, where I'm attempting to play Cards Against Originality — the online incarnate of Cards Against Humanity — with a friend nearly 2,000 miles away as he enjoys the gentle California weather of the Bay Area on the cusp of spring. It's just us playing and purely for experimental purposes but so far the game is going glacially. Ever since it was announced earlier this week that an online version of Cards Against Humanity had launched, (which Business Insider somehow picked up ahead of the pack) the site has been plagued by slow load times, forcing its creators to update servers and prepare for an influx of players they somehow weren't anticipating.

And, really, how could they not? The game in question somehow netted $180,000 during their Black Friday sale in which they literally sold bull excrement in a tastefully minimalist box. Their wintertime Ten Days or Whatever of Kwanzaa sale netted those who bought in a portion of a private island off the coast of Maine dubbed Hawaii 2, and those who ventured to it reaped the rewards of special sloth-adorned cards and a bottle of scotch. Cards Against Humanity has far more than a cult following as of this juncture and their previous exploits point to a particularly giving spirit: the reason Cards Against Originality can exist at all is thanks to CAH's Creative Commons license.

Unfortunately my cross-country game stops as soon as it begins, either because the site simply can't handle any more participants or because a two person game is simply impossible (not to mention sad) and just won't work online as in real life. Once things are running a bit more smoothly on the site and I can rope more people into playing, it's full steam ahead — Cards Against Originality not only advertises the original cards but comes packed with all five expansion packs. There is seemingly no limit to the online game's potential, unless you count the fact that you need an additional means of communication to read off the black prompt card.

Although it's entirely possible to play with friends from Alaska to Armenia, the judge is the sole person who can see the prompt card. There's no internal chat client to type out or screen cap what you're reading, so texting or Facebook messenger may be your best bet to get everyone on the same page. Still, it's an innovative way to take the Cards Against Humanity party anywhere you go sans boxes and boxes of cards, as Cards Against Originality is optimized for mobile. Now isn't that ___ to your ____?

More like this
How To Use Festify, A Spotify Plug-In
By Emma Carey
10 Eurovision Moments That Celebrate The Weird & Wonderful Camp Extravaganza
By Sam Ramsden
BTS Reveals 'Proof' Will Be 3-CD Album & Here Are The Tracklists
By Grace Wehniainen and Alyssa Lapid
How To Add Music To An Instagram Post
By Emma Carey
Get Even More From Bustle — Sign Up For The Newsletter