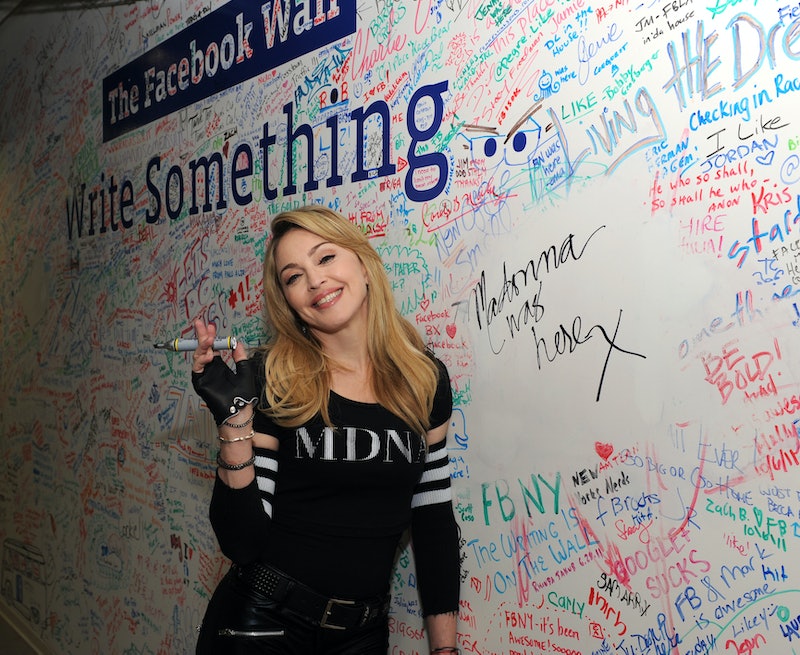 Fingerless gloves are a bit of an anomaly to some. I wear them daily in winter, because I like how they look and they mostly cover my fingers and shield them from the bitter cold, which is, you know, the function of gloves. But they also allow me tap away on my iPhone easily. Madonna is often seen in high-fashion fingerless gloves, but she's not the only one. Designer Karl Lagerfeld is never seen without them, and fellow pop diva Mariah Carey has also been known to get in on the trend..

The trifecta usually opts for leather versions that look like motorcycle gloves and don't serve any "cold protection" purposes. Black leather fingerless gloves are so chic. Her Madgesty has been rocking them since the MDNA cycle and was even wearing them yesterday during her appearance The Howard Stern Show. Mr. Lagerfeld is rarely seen without his black gloves, yet he never looks like he is a biker or trying out a BDSM fashion trend. Mimi, like Madonna, often dons a petite pair of fingerless gloves with one of her sexy body con outfits, adding a whole new dimension to her look.

So, yeah, fingerless gloves have proven to be pretty fashionable. Just check out Madonna's latest pair as she posed with The King of All Media. I love that she also added stacks of rings and bracelets.

But who wears them best? Let's have a look at this trio of fingerless wearers and see if we can determine who nails this trend. Consider this a fingerless glove face-off.

The Rebel Heart wore a pair with a Boy Scouts' uniform while feting Anderson Cooper.

And to the Golden Globes.

They've been part of her stage show.

I am going to venture a guess that Lagerfeld himself loved this Chanel pair. I certainly covet them.

She also donned fingerless gloves while promoting her Super Bowl performance in 2012. This trend has been with her for several years.

Her LBD — little "blue" dress — was turnt up with a pair of gloves. Let's keep ignoring the sweat stains and realize that Madonna proves this trend is equal opp and goes with anything.

Look, it's a fist bump from Lagerfeld. Don't leave him hanging. Check out the details, like the zippers and hardware.

He is rarely seen sans his gloves. They are so his signature and he's owned it for years.

It's like he shows just a hint of skin, adding another element of mystery via gloves. The gloves are so much a part of the Lagerfeld look — they're more than a trend to him.

Carey kicked up her one-shoulder LBD with a pair.

She may have broken up the black and white color scheme with tomato red heels, but the gloves were the most chic accessory for this outfit.

Here, they were functional, since she wore 'em while performing in the cold, in an unfortunate snow bunny outfit that many have talked about for years.

They weren't black, but they were blingy with her signature butterfly! For Mimi, it's as though she adds the gloves here and there, but is not super committed to the trend.

After analyzing how each style star wears fingerless gloves, I am going to have to give it to Lagerfeld. The gloves are an integral and essential part of his look. If he went without, the fashion world might stop spinning on his axis and because of that, he wins this battle.