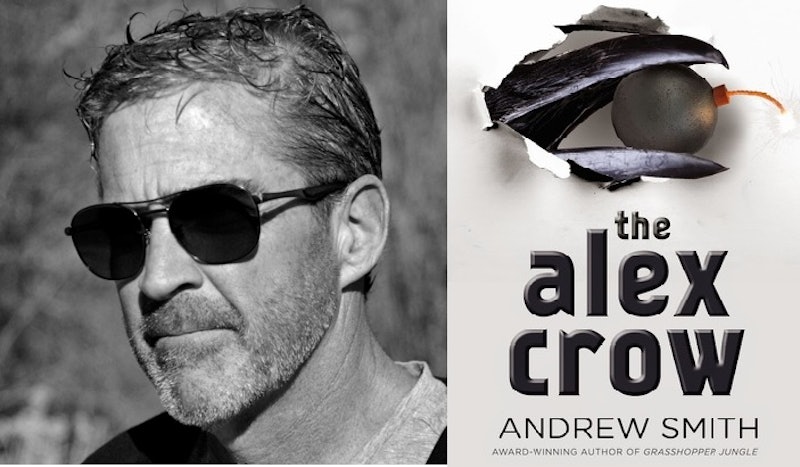 For the past year, Andrew Smith has been a force in the young adult literature community. Last year's Grasshopper Jungle was one of the most talked about books of the year and was a Michael L. Printz Award Nominee for 2015. The YA author has a new book out this month called The Alex Crow, but Smith's controversial comments to Vice have him in the media for a different reason.

When asked about female readers and female characters in his work, here's Smith's response, in full for context:

On the flip side, it sometimes seems like there isn't much of a way into your books for female readers. Where are all the women in your work? I was raised in a family with four boys, and I absolutely did not know anything about girls at all. I have a daughter now; she's 17. When she was born, that was the first girl I ever had in my life. I consider myself completely ignorant to all things woman and female. I'm trying to be better though.A lot of The Alex Crow is really about the failure of male societies. In all of the story threads, there are examples of male-dominated societies that make critical errors, whether it's the army that Ariel falls in with at the beginning, or the refugee camp, or Camp Merrie-Seymour for boys, or the doomed arctic expedition, they're all examples of male societies that think that they're doing some kind of noble mission, and they're failing miserably.

Many readers and writers (understandably) took offense to his comments, "othering" women — particularly in a time of sexism in the literary community and society at large. Sarah McCary at The Rejectionist wrote a series of satirical tweets called "Female Women Your Name Is Mystery," showcasing what's wrong with presenting women as the "other."

YA fantasy writer Tessa Gratton spoke up about Smith's comments on her blog, saying, "The interpretation is that women are less than human, or at the very least, inherently different from men. That is one of the oldest sexist arguments in the entire world." Fantasy and science fiction writer Phoebe North also responded to Smith's comments, saying that while he likely didn't intend to be sexist and that what he said it's "banal" it is wearying because, "As a woman, I’ve never had the opportunity to be ignorant to all things man and male."

Because this is the Internet and the world of faster-than-kneejerk reactions, it's important to note that many of these women calling Smith's comments sexists were themselves trolled.

Some major names in young adult literature spoke up personally for Smith, not supporting his comments necessarily, but remarking on how "villifying" one writer won't solve the problems his words speak to. It's also important to note that Smith has long championed diversity in YA, as several of his books focus on LGBTQ youth and his latest, The Alex Crow, speaks to immigrant experiences from war-torn nations.

It does seem (trolling aside, as always) that Smith's comments are able to spark a conversation and debate, something it seems both sides are advocating for. After the backlash against his Vice interview, Smith removed himself from social media and, according to his publicist, is not yet ready to respond. Smith is currently touring on his Keep YA Weird book tour, which celebrates experimentalism, innovation, and imagination in YA.