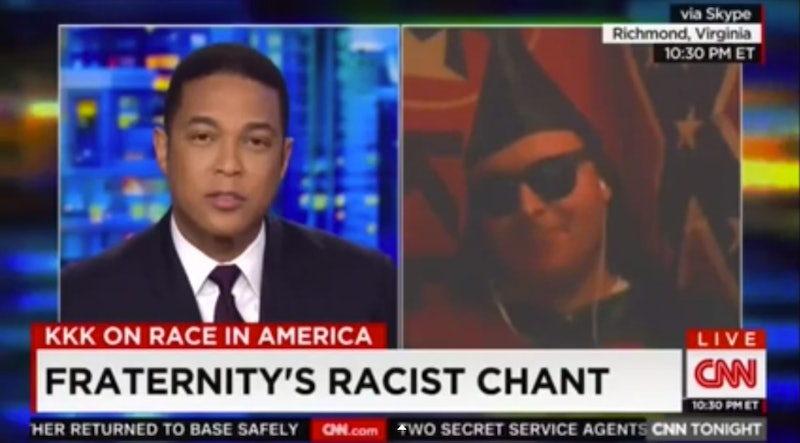 The University of Oklahoma Sigma Alpha Epsilon fraternity's racist chant, caught on tape, resulted a stunning and (in some ways) vindicating fallout. OU shut down the chapter and expelled two students, signaling its rejection of discrimination and bigotry. But on Wednesday evening, those values were on stark display for the nation, as CNN anchorman Don Lemon interviewed a KKK member about SAE's racist chant incident in a questionable move by a man cited amongst "The worst journalism of 2014" and, well, it went down just as anyone would expect it to, with a massive dose of intolerance and absurdity that are entirely out of step with the times we live in.

We have the right to basically associate with whoever we want to. We believe in the freedom of association.

Moore, who has been in the KKK since a teenager, also took a shot at Lemon's race when the anchor asked what drew him to the organization. Upset that his ramblings about the Bible had been cut off for the question, Moore responded:

People like yourself who discriminate against me who said I couldn’t stand up for my people ... You yourself are mixed, so, we'll see what happens with you.

To top it all off, the "Imperial Kludd" went on an anti-Semitic rant and then turned even more sour — if that were possible — when Lemon cut him off.

Get these mere children on Satan out of our government. They control Hollywood, the media, the entertainment industries... Yeah, you don't want to hear it. You're part of the Jews yourself.

If you're among the more pessimistic lamenting the decline of cable news today, watching CNN Tonight on Wednesday might have just reaffirmed that belief. I mean, I understand the want for fair and balanced journalism, but, honestly, who in their right mind actually went, "I wonder what the KKK thinks of this?" This incident hardly bears giving a platform to the other side of the story, anyway, because the other side is obvious, clear-cut racism that simply should not and cannot be tolerated.

But this, after all, comes from a network that previously ran an article pondering, "Can the Klan rebrand?" And Lemon himself is known for his notoriously bizarre, sometimes idiotic questions. But kudos to the anchor for maintaining a straight face throughout the interview (for the most part), though that could also be seen as a testament to the CNN's quality of journalism that takes semi-seriously the opinions of an imbecile.