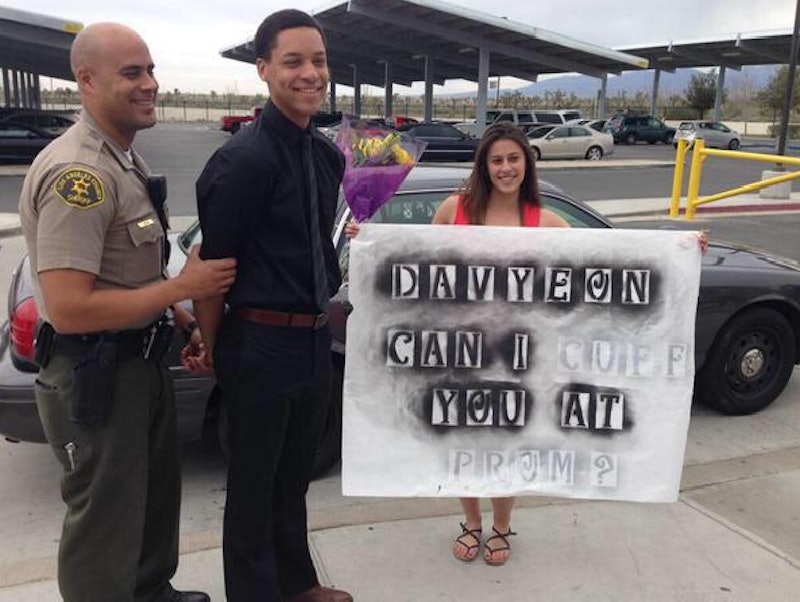 Part of being a teenager is the unavoidable urge to act without thinking. But when Twitter user Salty Stephanie decided to ask her black boyfriend to prom by having him fake arrested, you'd think that at least one person took a step back, realized that she was asking her black boyfriend to prom by having him fake arrested, and thought, "Huh. Maybe this isn't such a good idea." Right?? Shouldn't the policeman, who is an adult and therefore unimpaired by the cocktail of hormones and peer pressure that is puberty, be hyperaware of the ramifications of an officer arresting an unarmed black youth, especially since just this morning two policemen were shot in Ferguson following the police chief's resignation?Clearly none of that happened, because you're reading about it on the internet right now. According to Jezebel , Salty Stephanie, who shall henceforth be known as Bad Decision Maker, posted about the promposal on Twitter earlier this week, showing no signs of realizing what an enormously terrible idea this was. There were pictures. There were crying laughing emojis. Judging by her tweets, fun was had by all, even her petrified boyfriend, and all us old fogeys just don't understand humor.

To make things even better, the prank took place during school hours, because who wouldn't want to terrify their boyfriend in front of all his friends and teachers?

Look at that face. He's trying so hard to be a good sport.

Bad Decision Maker's fellow teens are rushing to her defense on Twitter, which she's helpfully been retweeting all day, saying that everyone's taking this way too seriously and we just need to back off.

God, adults are so embarrassing.