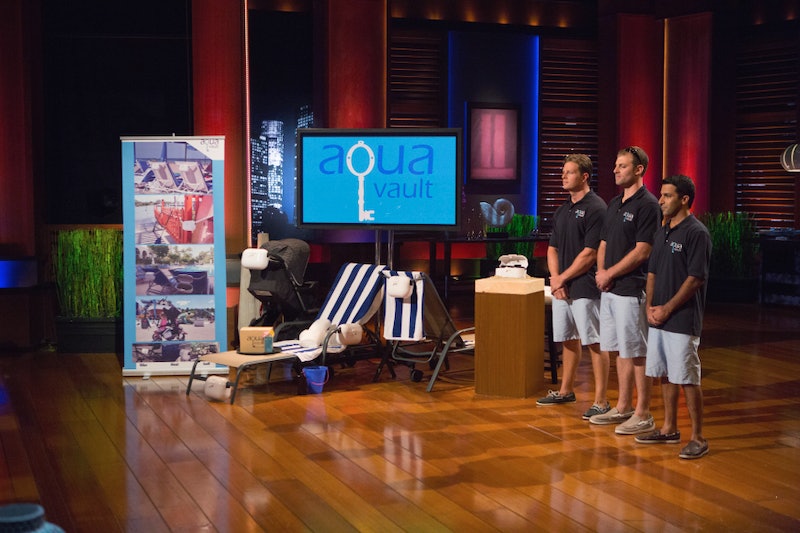 Some products that hit the Shark Tank pitching floor make you wonder, "How did they think of that?" and for others, it's more, "I see how they thought of that, but how many people really need it?" On this week's Shark Tank, Aqua Vault is a case of the latter, and the sharks are probably better equipped to answer that question than your average viewer. Sometimes the sharks' big wig status — no matter their humble roots — works against them when they can't see the market for a lower end product because of their own lifestyles. But as a young person who hardly owns anything valuable enough to lock my apartment for, I can see how the Sharks might see the usefulness of a portable vault that can travel with you anywhere, including the pool and beach, more than your average aquatic vacationer.

Of course, at its foundation, Aqua Vault does have the most common of storage needs in mind: phone, keys, cash. For those who might not typically dabble in safes and vaults, Aqua Vault serves to lock up the valuables that you might typically shuffle under a towel or a left-behind hat and hope for the best while you head over to the beach, bar, handsome stranger across the way, etc. Its patented design features a a three-digit combination lock and cylindrical cutout through the width of the safe that guarantees to fit 95 percent of existing beach furniture. So, what are the chances a lock box with a hole through the middle can earn an investment from the Sharks?

Where Do You Need It?

Despite its name, Aqua Vault is not an underwater safe... this is not a James Bond movie. Aqua Vault is designed to be used outdoors while you're away from deadbolts and suitcases; specifically, it was made with with trips to the beach and pool in mind. Aqua Vault locks to beach and pool chairs to protect a beach-goer's items while they hit the water or go for a walk. In addition to being a functioning lock box, Aqua Vault's website says it serves as a visual deterrent to would-be thieves who know bikinis leave little room for carrying around phones and car keys.

There are so many reasons I can think of that I wouldn't need this $40 product — luggage space, lack of surface to secure it to, plenty of people rotating in and out of the water — that it's easy to forget there are other people who would definitely find value in its security offerings. Hiding a phone under a towel is a $200-$500 risk that could be avoided with this $40 box, given that you have a chair or pole of some kind to secure it. For someone vacationing by themselves, or heading out to a location far away from their temporary residence with just another person or two, having a sense of security would certainly be worth not packing that last pair of shoes to make room for your Aqua Vault.

If you think it's worth it, the Aqua Vault is available now online, and the website currently has a 20 percent off discount code in honor of its Shark Tank appearance. The website also says the Aqua Vault can now be found at a variety of hotel chains.

Can Aqua Vault Secure A Deal?

There are definitely consumers out there for the Aqua Vault, and those people will be very thankful to hear of its existence on Shark Tank, but it might for the sharks to pinpoint a real market for the product. The sharks would need to have a personal connection to the problem that Aqua Vault solves to put their support behind it. It certainly has a QVC feel, so Lori Greiner is probably the best bet to woo with tales of secure beach lounging.

More like this
69 Great Gifts For Guys No Matter What Their Hobbies Are
By Teresa Newsome, Mia Mercado and Brittany Leitner
These Are The Very Best Deals At Target Right Now, Hands Down
By Jamie Cuccinelli
60 Small, Inexpensive Gifts People Love
By Julie Peck and Claire Epting
The 8 Best Dishwasher-Safe Cookware
By Jenny White
Get Even More From Bustle — Sign Up For The Newsletter