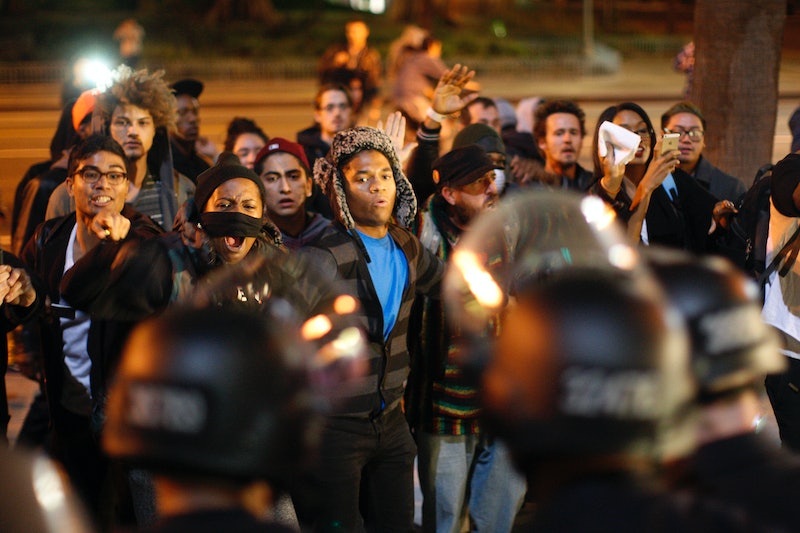 Video captured by Ferguson demonstrator Heather De Mian shows police and protesters taking cover after several sharp gunshots echoed throughout the streets. Within minutes of the shooting, which left two officers injured, reactions on social media to the Ferguson police shooting began to pour in. Some denounced the incident and called for peaceful protest while others questioned the severity of the officers' injuries. Online and on the ground, Ferguson has once again become a militarized zone, where police and citizens are up in arms.

The two Ferguson police officers were shot early Thursday morning while demonstrators protested in front of police headquarters after the Justice Department determined police procedures fell short following Michael Brown’s death. There were around 75 demonstrators and 40 police officers when the shooting occurred, USA Today reports. The two still-unidentified officers, ages 32 and 41, were standing in a line of 20 to 25 officers when three or four shots were fired.

The wounded officers have since been released from the hospital, according to ABC News. No suspect has been identified, but the St. Louis Post-Dispatch reports that police took two men and one women in custody Thursday morning. “We were lucky by God’s grace that we didn’t lose two officers last night,” Ferguson Police Chief Jon Belmar said during a Thursday morning press conference. “We could have buried two police officers over this.”

More like this
How The City Healed Five Years On From The Manchester Arena Attack
By Ella Glover
Taylor Swift, Kerry Washington & More Speak Out On Uvalde Mass Shooting
By Jake Viswanath
How To Support Gun Control Reform Right Now
By Morgan Brinlee and Carolyn Steber
Twitter Was Saying The Same Thing About Sam Ryder’s Surprising Eurovision Result
By El Hunt
Get Even More From Bustle — Sign Up For The Newsletter