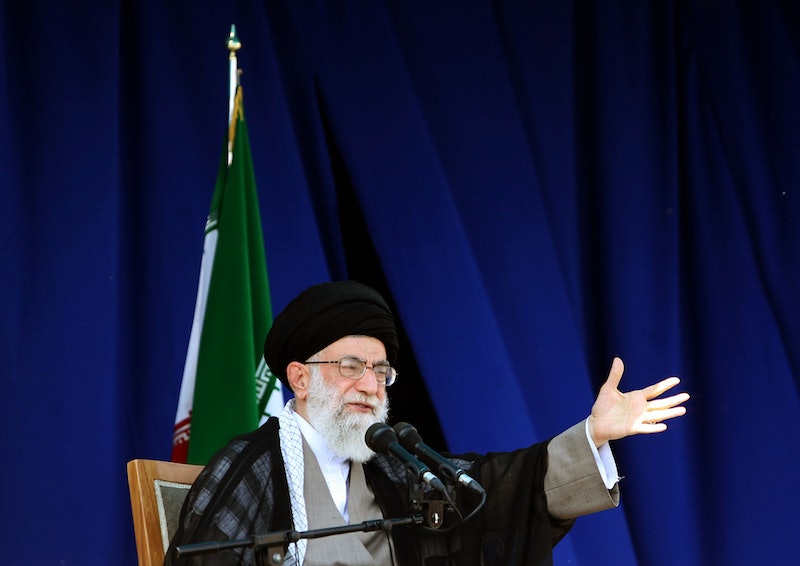 The Republican party's open letter to Iran warning its leaders against making a nuclear deal with President Obama was only the latest in the GOP's attempts to undercut the Obama administration's negotiations with the Middle Eastern country. Though the letter received intense backlash, it signaled the GOP's growing rogue-ish behavior against the president. On Thursday, Ayatollah Ali Khamenei weighed in on the issue. Iran's Supreme Leader blasted the GOP's letter, as well as Israeli Prime Minister Benjamin Netanyahu's controversial speech at Congress earlier this month. Speaking on Thursday with members of Iran’s top clerical body, including President Hassan Rouhani, Khamenei said:

The letter by American senators indicates the collapse of political ethics in the United States ... [Republican senators] said they want to teach us their own laws but we don’t need their lessons, our officials know how to make agreements binding if there’s a deal.

I’m worried because the other side is cunning, deceitful and back-stabbing. Each time we approach the deadline for talks, the other side, especially Americans, adopt a harsher and more aggressive tone. This is one of their tricks and a deception.

Penned by freshman Sen. Tom Cotton and signed by 47 GOP members, the open letter addressed to "leaders of the Islamic Republic of Iran" declared that the next president could do away with an agreement made without legislative approval "with the stroke of a pen." It received an unexpected blowback, and Iran dismissed it as a "propaganda ploy." But Khamenei's statements mark the first time the country's top figure — who has the final say in all matters of the state — has expressed his disapproval, echoing his words at the meeting later that day on his Twitter account.

He also had choice words for Netanyahu — with whom the Supreme Leader has never been on good terms — and called out other Congress members for accusing Iran of terrorism.

Proving just how much the letter outraged American citizens as well, a petition on the White House's website to file charges against the 47 senators involved garnered over 165,000 signatures in less than two days. On top of the flurry of angry responses, the letter has further deteriorated the administration's relationship with the GOP — the White House accused the Republican senators of conspiring with Iranian hardliners, and Vice President Joe Biden slammed the letter in a statement that aptly summed up the Republican senators' disrespect:

[The letter is] beneath the dignity of an institution I revere. In 36 years in the United States Senate, I cannot recall another instance in which Senators wrote directly to advise another country — much less a longtime foreign adversary — that the President does not have the constitutional authority to reach a meaningful understanding with them.