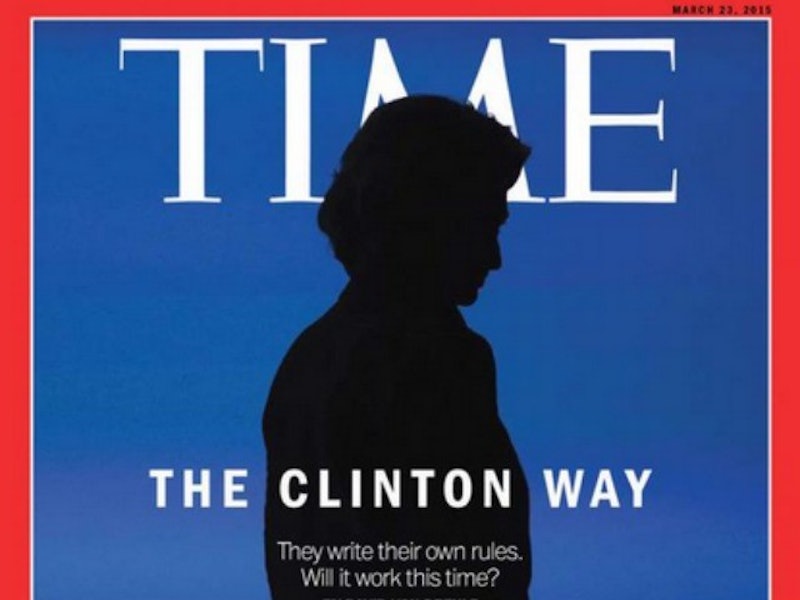 On Thursday, TIME released the artwork for its cover story about Hillary Clinton — haven't heard of her? Nope, us neither! — that, if you look closely and squint a bit, appears to show Hillary with horns on TIME's cover. David Von Drehle's article, The Clinton Way, went live on TIME's website Thursday. The print cover carries the tagline: "They [the Clintons] write their own rules. Will it work this time?"

Several media commentators immediately noticed the "horns" reference — which, to some, implies that TIME is slyly (and very subtly!) suggesting Hillary Clinton is, after all, the devil. From Breitbart News:

If this is a signal that even the mainstream media, notorious for being gatekeepers for the Clintons, is turning on Clinton, it is certainly bad news for someone Democrats view as being "too big to fail."

And from USA Today:

On close examination, the placement of Clinton’s silhouette under the ‘M’ in Time appears to give the likely presidential candidate horns.

Meanwhile, The New York Times debunked the growing paranoia that TIME is, in fact, trying to bring down Hillary by framing her as Satan.

... The M in Time has proved to be a stubborn and persistent horn-maker throughout its history.

This is true. In fact, TIME itself responded with a slideshow of 34 of its covers that gave people horns, from the Pope (several times) to Bill Clinton (Bill's gotta be used to this by now) and Obama. Even Abraham Lincoln was an unfortunate victim of the TIME horn.

Here's an elephant's behind with horns on it.

And for comparison, here's Hillary's cover.

Anybody else starting to feel like they'll only ever be somebody if TIME gives them horns?