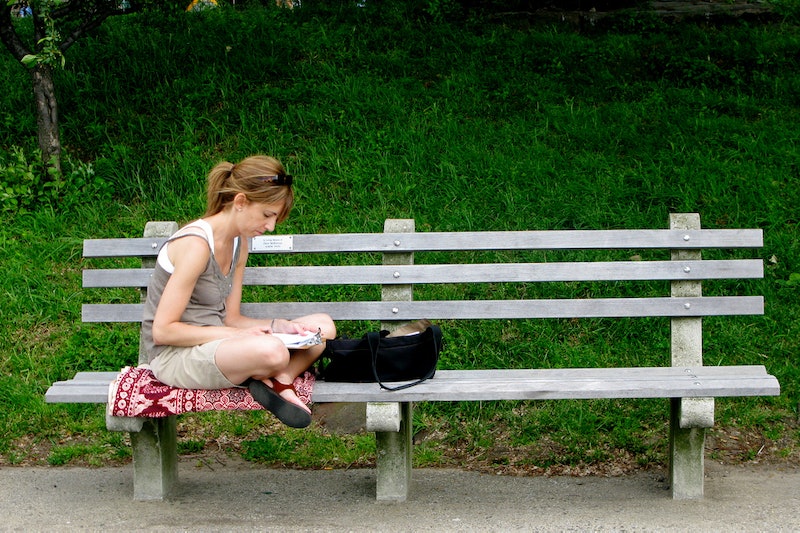 Bustle's picks for April 2015's best books prove that you don’t need to book a seat on the TARDIS to explore a new world (although if that were an option I would 100 percent take it). Instead, a new perspective on our very own home planet can be just the ticket you're looking for to shake things up.

The authors on this list offer up super-interesting versions of the real world as told by super-interesting people, and there's a lot to wander through and explore to take you away. With the exception of one rollicking thriller (Emily Schultz’s The Blondes), here you’ll find a smattering of stellar works examining this weird thing we call Life on Earth, both in the fiction and non-fiction spaces.

In particular, the memoir and the family epic rule here, and with the way these writers handle their worlds, you'll be so glad you came along for the ride. It's a thrill to remember that sometimes, the most edifying escape route is not through Hogwarts or Forks, Washington (to each her own), but through the equally mystifying real world.

Happy reading, 'cause spring is here.

Picnic in Provence: A Memoir with Recipes by Elizabeth Bard (Apr 7; Little, Brown)

Elizabeth Bard is living the dream: 10 years ago, the native New Yorker nabbed a tap-dancing French husband with whom she promptly shacked up in a “love nest” in the heart of Paris. And when Bard and Gwendal visited the tiny, lavender-scented Provençal town of Céreste on a summery, rosé (for him)- and chocolate mousse (for her)-fueled babymoon, the couple decided to drop their urban life and move south for good. A follow-up to Bard’s delightful bestseller, Lunch in Paris: A Love Story, with Recipes, Picnic in Provence relays Act II of her new French life with humor, warmth, and enough crusty baguettes (and, of course, lots and lots of butter) to make you want to pack up your studio apartment and find a French mansion of your very own. Sounds pretty ideal, non?

I think the most difficult genre to excel in isn’t dystopian spec fiction or hefty histories, but that most sublimely simple slot on the shelf: contemporary fiction. And the closer to the truth — the quirky, complicated, beautiful truth — that a writer hones in on, the more impressive she is. By these terms, Ann Packer is a modern master. Her fourth novel puts those talents on glittering display, offering a gorgeous glimpse of an average American experience. The Children’s Crusade tracks the Blair family from 1954 through to today, in which Bill and Penny Blair's four children have evolved from fleeting ideas to very real adults with families of their own. There’s nothing not to like here: from Packer’s uncanny character renderings to the intimacy with which she unpacks the relationships among them, The Children’s Crusade offers a work of fiction so effective you may mistake it for non-fiction.

The writer’s journal is an object of such fascination that it’s spawned its own kind of subgenre: these illuminating glimpses into literature’s most brilliant minds are humbling (Virginia Woolf’s A Writer’s Diary); intimate (Rilke’s Letters to a Young Poet); even educational (Dani Shapiro’s Still Writing ). In The Folded Clock, Heidi Julavits offers yet another iteration of the form, updated to fit a fresh sensibility. With deadpan humor and stunning insight, Julavits chronicles her day-to-day life as a multi-hyphenate (writer-teacher-wife-mother-etc.) in pitch-perfect vignettes: on July 18, she philosophizes about the dummies on The Bachelorette; on October 18, she considers the Internet’s gender (it’s probably female). Julavits manages to steer her philosophizing clear of triteness or pretension. Instead, she presents as an empathetic observer of the world; a person with whom you'd be thrilled to chat about both inappropriate crushes and the time's frightening momentum.

With Diamond Head, 27-year-old Cecily Wong delivers a family epic that sweeps across eras, oceans, and cultures, narrated by the daughters and wives of the powerful Leong family. But it’s a curse that binds the family’s journey from Boxer Rebellion-era China up through 1970s Oahu, as described by a parable: a “red string” ties a man to his future wife; and if the string becomes riddled with knots and breaks prompted by his misdeeds, it will “unsettle the forces of fate,” affecting generations to come. Wong, whose own family history inspired her to begin writing Diamond Head while still an undergrad at Columbia University, will utterly transport you through her breathtaking prose in this impressively crafted story.

Debut novelist Hermione Eyre’s Viper Wine defies rigid definition. What is, at its surface, a lushly rendered portrait of life at Charles I’s court explodes in a maelstrom of anachronistic references (think David Bowie, Naomi Campbell, and the Daily Mail), a Romantic cautionary tale of beauty’s hypnotic power (think Nathaniel Hawthorne’s The Birthmark, as written by a young, female, contemporary writer), and a dynamic study of England at the brink of its Civil War. It sounds like an utter mess, but trust me (and the hordes of glittering reviews from Eyre’s native England): Viper Wine is an incredible accomplishment. You will love it.

Angela Flournoy’s Detroit-based debut novel has all the markers of a classic generational chronicle: a many-branched family tree (which is kindly mapped out in the novel’s beginning pages); a narrative seed that shapes the clan’s mythology (a conflicted belief in ghosts); and an arcane family slogan whose original meaning has been obscured by repetition (“There ain’t no haints in Detroit!”). But The Turner House could only have been written today, and by a writer whose sensibility is as relevant to the contemporary American experience as Flournoy. While the story tracks the African-American family’s climb from poor to middle-class, the meat of the narrative examines how the recent economic downturn destroyed the work achieved by an earlier generation’s blood, sweat, and tears: a story many Americans today know all too well.

In The Blondes, Emily Schultz offers an Atwoodian premise: a mysterious virus infects blonde women (either natural or dyed), inducing the carriers to embark on destructive, murderous rampages. Hazel Hayes, a former graduate student, narrates this haunting story retrospectively from her hiding place deep in the Canadian woods. You could read The Blondes at its aesthetic level — a campy, King-inspired nightmare sure to satisfy the scream queens in the audience — or you could delve deeper into its latent social commentary. (Which is not hard to do: at the time of the outbreak, Hazel studied Aesthetology; and her thesis explored, as per Hazel’s simplified description, “‘what women look like and what we think they look like.’”) Who knew beauty could be so deadly?

Spinster: Making a Life of One's Own by Kate Bolick (Apr. 21; Crown)

“Whom to marry, and when it will happen —” Bolick poses in an Austenian turn of phrase at the beginning of Spinster, “these two questions define every woman’s existence, regardless of where she was raised or what religion she does or doesn’t practice.” This is Bolick’s thesis statement, her modus operandi, and the defining sentiment of her own adult life. In this beautifully articulated memoir-cultural/historical examination mashup, Bolick shares both her own reasons for remaining unmarried, as well as sharing examples of great spinsters throughout history (such as Edna St. Vincent Millay and Charlotte Perkins Gilman), absolving the term’s negative connotations in the process. Like last month’s Meaghan Daum-edited Selfish, Shallow, and Self Absorbed , Bolick’s newest is an inspirational treatise that will help define a nascent generation of women who choose to live happily independently.

Before reading God Help the Child, I hadn’t yet experienced that visceral reaction so many of Toni Morrison's readers undergo after reading The Bluest Eye or Song of Solomon or Sula, that bittersweet storm of tenderness and outrage for which the inimitable writer is so extolled. Consider me a convert. In only 183 pages, Morrison covers intense ground: How do our childhoods — the traumas and the choices both — affect the course of our maturation? How do the rejections we experience as children carry through into our adult relationships? How do they carry out in our relationships with ourselves? The Nobel Laureate’s prose is as precise and luminous here as ever; and although this is a work of contemporary fiction — a bit of a departure for Morrison — that sui generis serves her faithfully in her 11th adult novel.

In last year's Some Luck , Jane Smiley introduced us to the Langdon family, a clan of Iowan farmers extraordinary in their ordinariness. A saga that began in 1920 continues here, in the second installment of Smiley’s planned trilogy, in 1953 at patriarch Walter’s funeral. Smiley packs the Langdons' story with all the idiosyncrasies in character and relationship that pepper every real-life family; but the real thrill is observing how each of the five Langdon siblings, and their own children, navigate the rapidly-changing political and cultural landscape. Early Warning is as much a history lesson as it is entertainment, launching us from post-WWII up through the advent of the early computer age right along with the family.