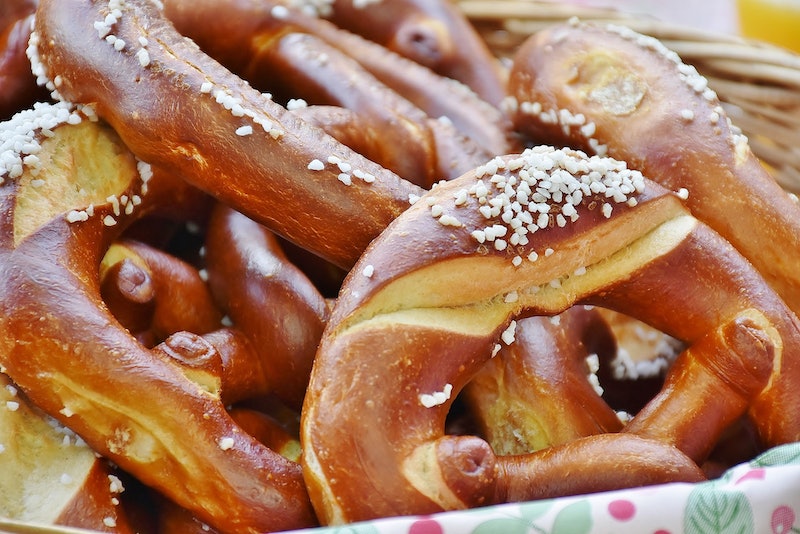 We've probably all discovered an old can of soup hidden in the back of our pantry that was purchased sometime during Destiny Child's heyday, but this is next level. Archeologists have unearthed a 250-year-old pretzel in the German state of Bavaria, officials announced on Thursday, that could be the oldest one ever found in Europe — or anywhere, I would imagine. The excavated pretzel bears a close resemblance to the pretzels we get at ball games and amusement parks now (because why change a good thing?). Despite the fact that it might be older than the United States, it still looks good enough to eat, no?

The ancient pretzel was discovered last summer when archeologists were excavating a site at the Danube River in the Bavarian city of Regensburg. There must have been some kind of old-school Le Pain Quotidien in the area because along with the pretzel, the scientists also dug up several rolls, croissants, and other pretzel fragments. Silvia Codreanau-Windauer, from the Bavarian State Department of Monument and Sites, told NBC News:

It is an archaeological sensation. In my 30 years in the business I have never found an organic object.

She also explained how the pastries, which she believes date back to between 1700 and 1800, were able to maintain their shapes:

The baked goods, which were typical for the religious fasting period, are very well preserved because they were originally burnt in the baking process.

The pretzel and pastries have been put on display at the Regensburg Historical Museum.

As surprising as this discovery was, it makes sense that the archeologists found the pretzel where they did. Pretzels are widely believed to have been invented by German monks in Bavaria sometime during the early Middle Ages. The famous looped shape is said to represent a child's arms folded in prayer and its three holes are supposed to reference the Christian Trinity.

Whatever their origins, the modern-day pretzel is definitely a thing to worship. Here are seven reasons why we love pretzels so much we're tempted to eat one that's 250 years past its expiration date.

They're Basically All Carb

Carb lovers are by default pretzel lovers because they're basically just twisted ropes of dough.

They're Good At All Temperatures

Pretzels are still delicious when cold, but when they're fresh-baked — crispy on the outside but soft and warm on the inside — they're divine.

Carbs + salt = what more could you ask for?

They Pair So Well With Mustard And Beer

Add in a condiment and a beverage, and it's a meal.

You Can Have Pretzel Goodness In Your Mouth For Under $5

For such a delicious snack, it feels like a crime that they cost so little.

They Remind You Of Your Childhood Days At The Mall

Just hearing the name Auntie Anne's conjures that heavenly smell and fills you with sweet nostalgia.