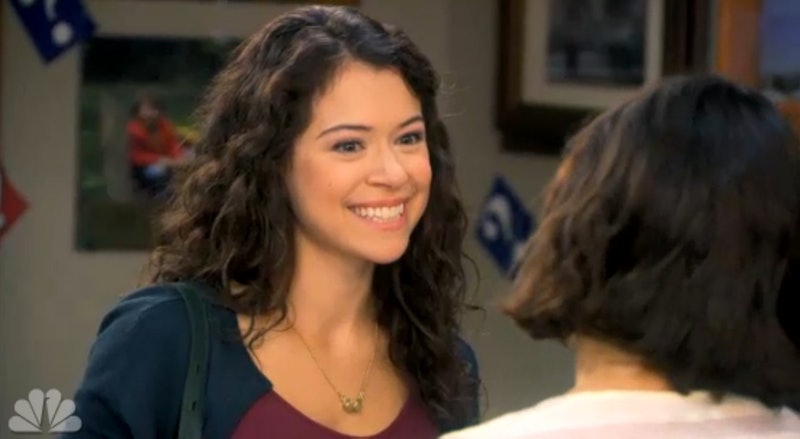 Tatiana Maslany may be pulling quadruple-plus duty on her BBC America series that everyone ever should watch, Orphan Black, but somehow, she still found time to take over television in the most endearing ways possible. If Tatiana Maslany wins all the awards this season, that would be OK! First up on her worldwide takeover tour: Parks and Recreation, in which she's set to guest-star in a few upcoming episodes as a doctor who Tom Haverford falls head over heels in love with. After watching this preview clip of Tatiana Maslany's first Parks & Rec appearance, we don't blame him!

She's completely endearing here, even as April attempts to break her spirits by suggesting that the parks department no longer gives out permits to hold events in Pawnee parks unless it's for a satanic ritual or a slip'n'slide competition.

The little Orphan Black shout-out in this clip, as subtle as it is, is great too — when Tom first sees Maslany's character, he immediately rushes over and starts speaking in a British accent to look cool, which is pretty much a reference to Maslany's accent work on OB. Only, Maslany does it better, and Tom sounds like an American guy trying to be British but actually sounding Australian.

You can check out the clip below. Maslany's stint on Parks begins this Thursday on NBC.