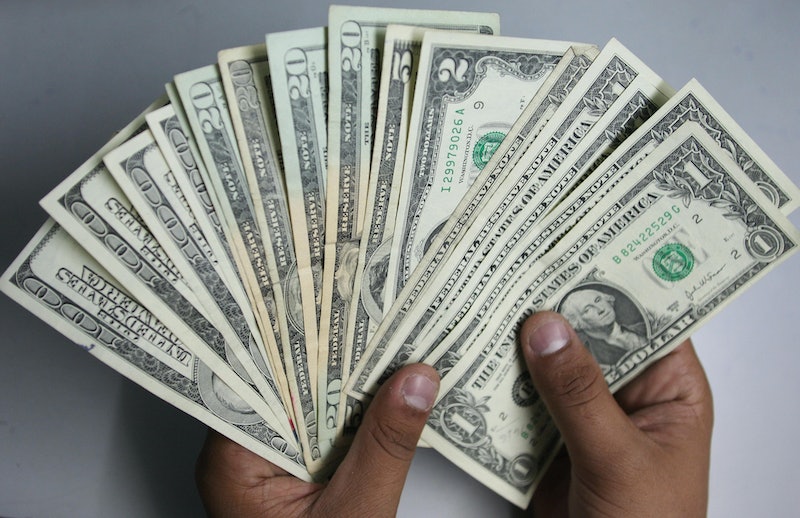 If you're a Millennial, there's a decent chance that women won't be earning equal pay for equal work before you retire. According to a disheartening new study by the Institute for Women's Policy Research, if things keep going the way they are now, the U.S, won't have gender pay equality until 2058. So let that sink in. In spite of the fact that people claim we are living in a totally gender equal society, our generation will probably not have gender pay equality until, at best, the very end of our careers. If that isn't enough to piss you off, I don't know what is.

Today, women earn an average of 78 percent of what white men make, though when race is taken into account, the picture looks even more upsetting. Black women make just 64 percent; Native American women just 59 percent; and for Latina women, only 54 percent. In other words, this whole "post-racial, gender-equal" thing America supposedly has achieved is way more fiction than fact. And depressingly, it doesn't look to become a reality for a long, long time.

According to the Institute for Women's Policy Research, over the past ten years, the gender pay gap has improved slightly — though based on other factors, women's status in the workplace overall has gotten worse — but that improvement has certainly not been enough to suggest real equality might be on the horizon anytime soon. Overall, government jobs seem to be the most equal in terms of pay, they found, and union membership tends to bring women's rate of pay much closer to men's. Having children on the other hand, often means your paycheck takes a hit.

And, of course, where you live also affects how relatively equal your pay might be. Depending on which state you live in, you might actually get to spend a meaningful portion of your career getting paid fairly — or your daughters might still be waiting for equal pay when they retire.

Here are the five states who will close their wage gap the soonest — and the five who are lagging furthest behind, based on their current progress since 1959. Interestingly, their progress on equal pay doesn't always line up with where they fall in relation to other aspects of workplace equality.

Although Nevada doesn't do so well on certain factors (and in fact comes in last when it comes to the percentage of management positions filled by women), women in the state still earn 82.7 cents to a man's dollar, which is above the national average. Women will probably achieve equal pay in the state in 2044.

Arizona also has a lot to work on, but women in the state are still earning above the national average. They're projected to close their gender pay gap by 2044 as well.

Maryland is generally doing pretty well on lots of factors when it comes to women's employment, including women's share of management positions and their overall participation in the labor market. Plus, women earn 87.4 cents on the dollar; the gender wage gap there is expected to close in 2042.

California also has a lot going for it in terms of women's status in the workplace overall, and also should close the wage gap in 2042.

Who would have expected gender pay equality would first be achieved in America's wackiest state? Florida kind of sucks when it comes to things like women in STEM or women in management, but women in the state do already earn 85 cents to a man's dollar, which isn't nearly as bad as the national average. And that gap should disappear around 2038. That's actually a kind of conceivable date!

Is it sad that that's impressive? Well, not as sad as some of these states...

The Worst States For Wage Equality:

West Virginia ranks dead last in terms of women's participation in the labor force, but they are only 46th when it comes to closing the pay gap — which is expected to happen in 2101. That's right, none of the worst five states will be paying women an equal wage anytime this century. At least not if everything continues as it has been.

Utah isn't as bad as they could be at things like labor force participation and women in management, but they're still not great. Plus it's going to take until 2102 until women start making an equal wage.

North Dakota, oddly enough, does really well at women's participation in the labor force — which really only makes it more insulting that those women won't be making as much as their male co-workers until 2104.

Louisiana's gender pay ratio is currently the worst in the nation with women making an average of 66.7 cents on a man's dollar. It's such a deep hole no wonder it's going to take them until 2106 to achieve equality at this rate.

I really hate to do this to you I really do. But those other timelines have nothing on Wyoming. The state will not have equal pay between men and women until the year 2159. Also known as 144 years from now. Like maybe your grandkids will see it? Maybe?

You can find out when the rest of the states will finally have gender equal pay (at least if everything progresses as it has been) here.

More like this
How To Fight For Reproductive Rights, Based On How Much Time You Have
By Courtney Young
5 Crystals To Manifest More Money
By Megan McCarty
Sandra Bullock, Girlboss Extraordinaire
By Matt Harkins & Viviana Olen
How To Use Circle, Twitter’s Version Of Close Friends
By Emma Carey
Get Even More From Bustle — Sign Up For The Newsletter