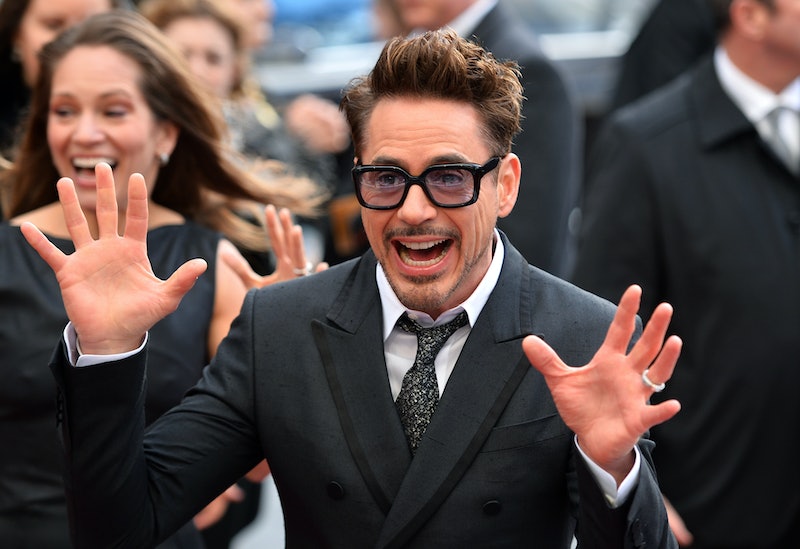 As much as he has a reputation for being a slick, always well-suited playboy (both in real life and in his role as Iron Man), Robert Downey, Jr. is really just a softie at heart. He's a noted Hollywood philanthropist, often getting personally involved in his causes. On Thursday, the Avengers actor posted a video on his Facebook page of his meeting with a seven-year-old boy named Alex who, as E! Online reports, "was born with a partially developed right arm." Robert Downey Jr. met Alex and gave him a bionic arm that looks just like the one from Iron Man's suit in the movies.

Besides being almost TOO adorable — Alex is quite composed and well-spoken, looking as dapper as RDJ with a little red bow tie and calling him "Robert" — the video was made as part of a collaboration with Microsoft's One Note Collective Project and the Limbitless Foundation, working to make affordable, 3D printed bionic limbs for children. RDJ is no stranger to lending his charm, time, and money to several causes, doing good while looking good.

And he loves to help kids — especially by surprising them. In 2013, he surprised children at a special advanced screening of Iron Man 3 which was held "for kids from the New York City Police Athletic League who volunteered to clean up Hurricane Sandy-ravaged areas around the city." Speaking to the kids and praising them for their bravery and real-life superhero actions, he said that they were the future of the nation. And he ALWAYS talks to kids like they are fellow adults.

Iron Man is also a supporter of March Of Dimes, the non-profit organization that was created by President Franklin Delano Roosevelt in 1938 to promote healthy pregnant women and healthy babies. He co-chaired their hugely successful celebrity event in 2012 which raised over $1 million for the foundation. They reached out to and honored women in Hollywood, like Reese Witherspoon, who were "celebrating babies" (so cute!) and who were role models for the foundation.

He brings his charm to almost everything he does, including his philanthropy. He's a supporter of the Robin Hood Foundation, which works to fight poverty in New York City through the creation of community programs and better schools. RDJ is a New York native, so this one is probably close to his heart. At Sting's 60th birthday party at the Beacon Theatre in 2011, where all proceeds went straight to Robin Hood, Downey Jr. jumped onstage to sing a surprise duet of "Driven To Tears."

RDJ: as much as he seems like a bad boy, he's got a golden heart. (In fact, he received a Golden Heart Award in 2010 from Midnight Mission, a charity he supports that helps disadvantaged people rebuild their lives after losses... but you get the idea.)