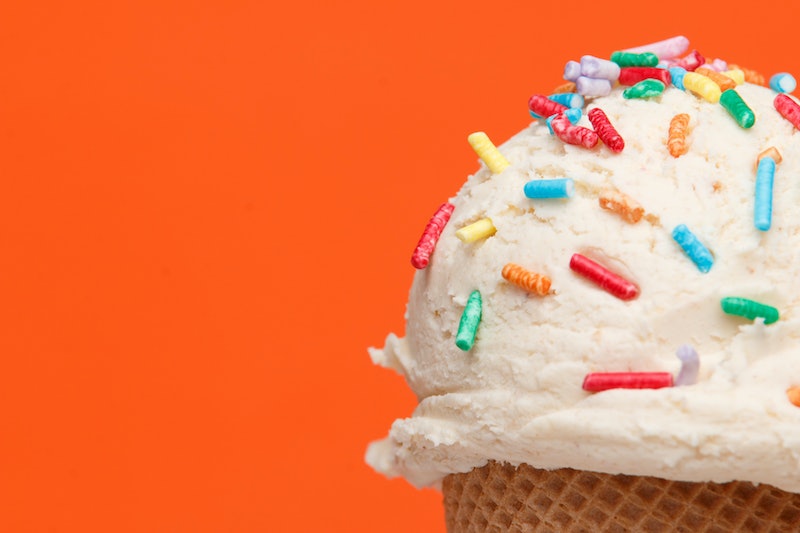 As you may already know, Monday, March 16 is Free Cone Day at Dairy Queen. Although the idea of free ice cream is usually exciting enough in and of itself, this year's event is even more notable than usual: It's in celebration of DQ's 75th anniversary. As I remarked before, I had no idea that Dairy Queen even had an annual Free Cone Day event, let alone that it had been around for a whopping 75 years; either way, though, I'm glad I now know these two crucial pieces of information. Happy birthday, Dairy Queen! We gladly accept your gift of free things in celebration of the day! For you are a noble establishment, indeed!

Sadly, though, not everyone happens to live near a Dairy Queen. But hey, you know what? That's OK! There are still a wide variety of sweet treats purveyors from which to get free ice cream. True, the offers might not be happening right this very minute… but they're still worth putting down on your calendar. Because who doesn't like free ice cream? No one. That's who.

So: Here are nine other ice cream shop chains that bestow free cones and sundaes upon their customers at various points throughout the year. You're welcome.

You might already know about Free Cone Day at Ben and Jerry's; they've been doing it since 1979. Each year, the Vermont-based ice cream company's Scoop Shops offer one deliciously sweet cone of their fabulous frozen treats to each of their customers (while supplies last, of course). There's no word on when 2015's event will be yet, but they usually occur sometime in April. That's only a few weeks away, so keep your ear to the ground.

If you join Baskin Robbins' Birthday Club, you get not only an email entitling to one free ice cream on your birthday, but also a discount on a birthday cake. Apparently you also get BOGO coupons and additional special deals all year long, too. Not a bad idea!

Friendly's version of the birthday club nets you 25 percent off your total bill on your next visit to a location right after you sign up; then, on your birthday, you get a free Happy Ending sundae. Sundae > single scoop cone. Just sayin'.

Cold Stone used to have a birthday club, but alas, it appears to have gone the way of the dinosaur. It does, however, have its eClub, which it also refers to as the My Cold Stone Club. Signing up for it offers you not only a BOGO coupon immediately entitling you to two Creations for the price of one, but also a second BOGO coupon for the same thing on your birthday. True, you have to spend something to get something in both cases — but why not treat a friend to something sweet while you're at it?

Like Ben and Jerry's and DQ, Haagen-Dazs also does an annual free cone day. We're still waiting on information for this year's event, but last year's happened in May; as such, it's probably a pretty good bet that we've got a few months to go. But that's OK — better to spread out our free ice cream events, rather than make ourselves sick gobbling too much of the stuff down at one time, right?

Surprise! Carvel holds an annual free cone day event, too! It's usually towards the end of April or beginning of May, and it entitles each customer to one free Junior-sized cone in either vanilla or chocolate. Last year it was part of their 80th birthday celebration and the year before that, it helped benefit the Red Cross; it's anyone's guess what this year's cause celebre will be.

I've never had an ice cream from Maggie Moo's, but that might be because there aren't any in either the state in which I currently live, or the state in which I grew up. But hey, if you know and love Maggie Moo's, go ahead and sign up for their rewards program — you'll get a free ice cream right off the bat, another one on your birthday, and a whole bunch of deals and steals scattered throughout the year.

Handel's is another chain I have no experience, mostly because they seem to be based primarily out of Ohio. If you sign up for their E-Me newsletter, though, you'll get a coupon for a free cone at any Handel's location. This one has a few more hoops to jump through than some of the others, though: First, you only have 48 hours in which to use your coupon; and second, you need to display a driver's license or birth certificate when you use it, as well.

PJ Day rewards you for wearing your PJs to your friendly neighborhood Bruster's location with a free cone. According to this Facebook event, it's happening on March 28 in 2015, although I'm not sure if it's true of all locations — so ask around if you've got one near you. But hey, guess what? There are plenty of other promos for these guys, too. My favorite is Banana Thursday, which apparently happens every week. All you need to do is bring a banana with you; then Bruster's will supply you with everything else you need to turn it into a banana split. The resulting sundae isn't totally free, but it is half off. Not bad!