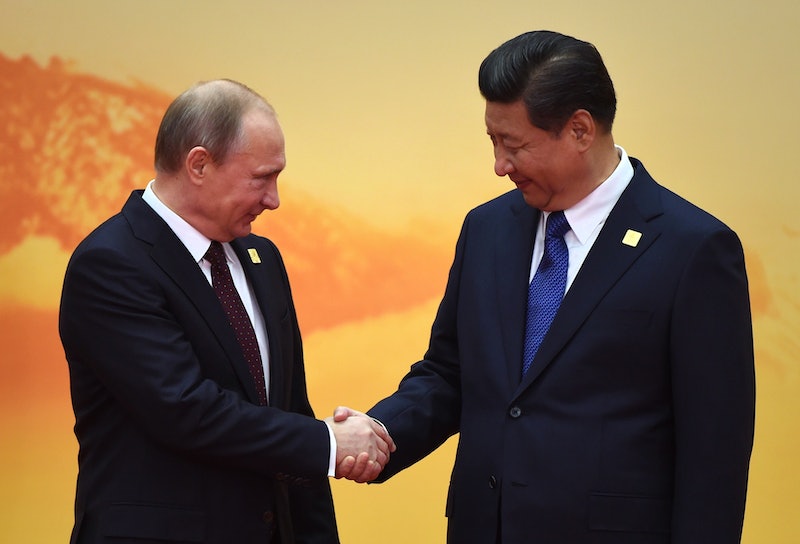 Say what you want about the Russian president, there's no denying the cultivated aura of machismo and virility surrounding his image that those close to him have worked hard to maintain. So, amid rumors surrounding poor health, Vladimir Putin is not ill, insisted the Kremlin, despite having canceled two meetings in just as many days and his absence from the public since March 5.

On air at a Moscow radio station, Putin's spokesman Dmitry Peskov said that Putin was “absolutely” healthy, and added that the Russian leader's handshake was still so super-strong it could “break your hand.” Referencing the Ukraine conflict, Peskov said:

There’s no need to worry, everything is fine. [He is] constantly in meetings, but they are not all public... [Meetings on the Ukraine crisis is] very stressful.

Putin had canceled a visit to Khazakstan on Wednesday, where he was supposed to meet Kazakh President Nursultan Nazarbayev and Belarusian President Alexander Lukashenko for talks in the capital Astana on Friday. An anonymous Kazakh official told Reuters that the Russian president had likely fallen ill. He had also called off at the last minute a Wednesday meeting with officials from Georgia’s autonomous republic of South Ossetia. Putin has not been seen since a public appearance with Italian Prime Minister Matteo Renzi on March 5, where he looked a picture of health, at least for a 62-year-old.

Speaking to Reuters in a phone call, Peskov said that Putin was in good health, adding, albeit vaguely:

Further spurring rumors of illness, the Kremlin had bizarrely published several old photos in what could be seen as an attempt at normalcy. Akin to old Soviet habits of maintaining intense secrecy around Russian leaders' health, details of Putin's personal life has been a mystery to the public. The last time there was talk about his possible floundering health was in 2012, when Putin was seen limping in several public appearances, The Guardian reported.

BBC reporter Jon Sweeney, who famously confronted Putin about Ukraine before, questioned his health and the government's secrecy.