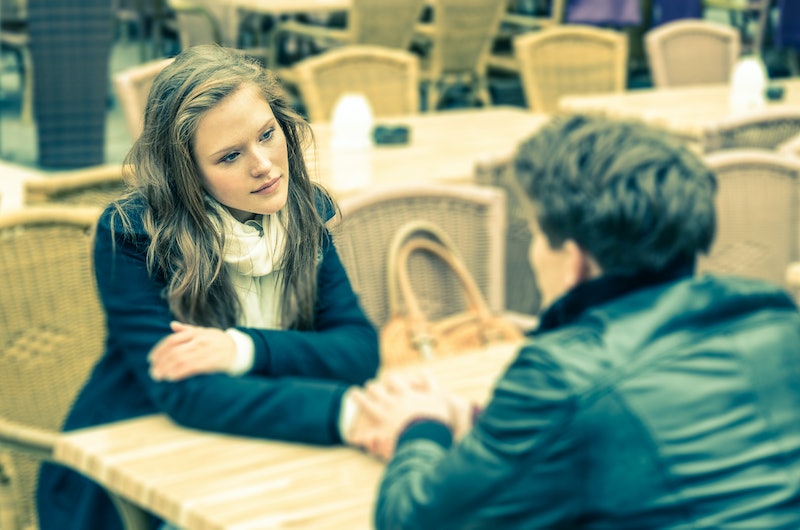 While other little girls draped white towels around their heads pretending to be brides, I was playing Naked Car Accident by putting the world's most famous (doll) super couple, Barbie and Ken in Barbie's pink convertible, and throwing the unclothed duo down the stairs. I know it sounds kind of morbid, but it was a lot more fun than planning a wedding in mind-numbing detail, which some of my kindergarten friends were already doing.

Like many couples, Andy and I met through online dating. We clicked right away. I liked how down to earth he was, and he loved my sense of humor and smile. Since he lived in San Diego, and I lived 124 miles away in Los Angeles, it wasn't long before he was exhausted by his twice weekly trips up to see me. Six months after meeting, we moved in together.

I can tell that Andy loves me, not only because he says it, but also from the way he cares for me every day. He randomly brings me flowers, and supports whatever creative thing I'm pursuing. In return, I won't cook any kind of seafood because I know things like cod and shrimp make him sick. We have a great relationship that's filled with laughter whether we are traveling or relaxing at home. I was pretty confident that we'd be spending the rest of our lives together and didn't need a marriage license to prove it.

After we'd been together for a few years, the idea of marriage started to cross my mind, but then I'd remember that not only were my parents divorced, so were Andy's, and that many of our friends were in the process of splitting up and divorcing. Sure, we knew some couples with strong, healthy marriages, but it appeared as if more and more people were just staying single.

I had many reasons for not wanting to be anyone's wife, but the one that was the strongest was that I refused to get married until same-sex marriages were legal. Once my gay friends started having weddings, I no longer had my main excuse. When I heard that people were also getting married to make sure they had medical insurance, and that by being married, they would be qualified for spousal benefits from Social Security, Medicare and Disability, I began to reconsider my anti-marriage stance.

I knew that there were legal, financial, health and emotional benefits to marriage, and I wanted to benefit from them too. Besides my niece is a fabulous wedding planner and had been bugging me for years to let her plan my wedding. Why shouldn't Andy and I make our commitment to each other legally binding and have a kick ass party to celebrate it?

Andy and I have been together for over 10 years and since there's no common law marriage in the state of California, if we wanted to be considered married, we'd have to do it the traditional way.

"Hey, maybe we should think about getting married," I said to Andy, confident that I was voicing his greatest dream. He had brought it up before, especially when we were stuck in the car, driving to visit relatives or going to Las Vegas.

Whaaaat? I assumed I was the one who didn't want to get married, not him. I was completely stunned.

I tried to figure out what his reasons for not marrying me might be. He had been married before and according to him, the five years of their marriage hadn't been happy, and the breakup that went along with it was even worse. But Andy had told me before that I was nothing like his ex-wife, since unlike her, I was a creative person who pursued her dreams and was constantly learning.

It was obvious to me that if Andy and I got married, our marriage would be nothing like his first marriage. Suddenly the fact that Andy was resistant to marrying again, intensified my desire to get married.

What would happen to us if in 30 years our relationship wasn't legal and (God forbid) one of us got seriously ill and couldn't work? How could he not want to provide me some kind of safety-net for the future? I felt that his not wanting to marry me was him basically rejecting me. I decided to try again, but without any expectations.

"So when you said you didn't want to get married, you meant right now, but eventually, down the road, you’d want to, right?"

Andy paused, and then (almost sadly) said "No, I told you before, I never want to go through that again. I love you and I like what we have."

I didn't understand Andy's reasons for not tying the knot, but I knew that I needed to respect them and to let the issue go. I could have tried to wear him down, but I didn't want to feel as if I had forced him into a matrimonial state that he didn't want to be in. I didn't have any guarantees that we'd never hurt each other or that we would be able to stay together forever. I couldn't force him to marry me and not be able to promise him total happiness and a bond that would never be destroyed.

My choice was either to break up with him, and try to find someone who wanted to get married, or try to accept that the relationship Andy and I have is enough. I chose to be grateful for what I have. I need to take full responsibility for my future and not depend on Andy to save me.

If I'm truly honest with myself, I know that I never really wanted to get married, I was more interested in having a party. Maybe that's what Andy and I will do, have a non-wedding reception. Now that would be fun.