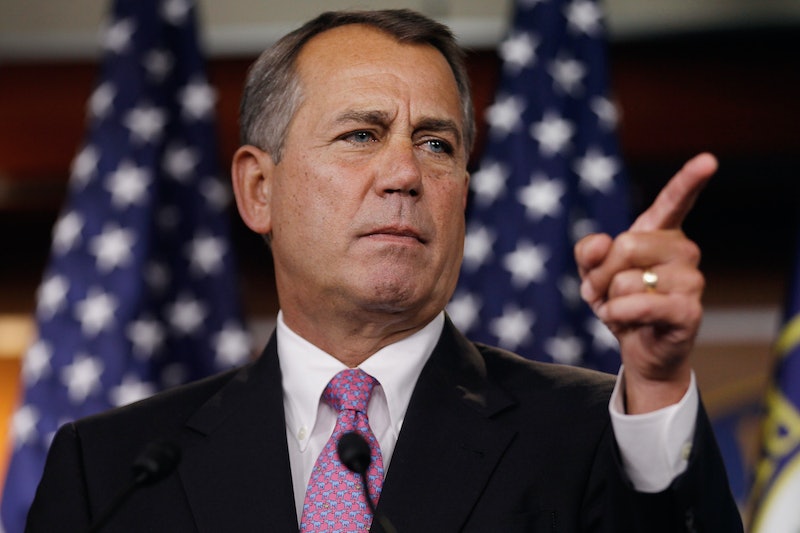 The March Madness bracket isn’t the only one to keep an eye on this month. Members of Congress might not be up for reelection right now, but they are running against each other in the Climate Change Fantasy Tournament, sponsored by Organizing for Action, a nonprofit group that advocates for Obama’s agenda. The tournament pits 16 congressmen against each other to find out who is the worst climate change denier.

So Organizing for Action made an easy way to call deniers out, and to engage people in the issue by letting them vote congressmen into the "Denial Finals." In the top 16 ranking slots and in standing for the ultimate title of the worst of the worst is everyone from Speaker of the House John Boehner and Senate Majority Leader Mitch McConnell to Chairman of the Senate’s Environment and Public Works Committee Jim Inhofe and presidential hopeful Sen. Ted Cruz.

Aside from voting, the option also exists to just straight-up call elected officials out. By clicking on the not-so-subtle, bright orange "Call Them Out" button, you can find more information on what the election official has said about climate change in juxtaposition to the facts. Then you can call them out on Twitter, or go straight to the source and send them an email.

For example, Organizing for Action quotes Sen. Marco Rubio (R-FL) as saying on the topic of climate change: “I don’t think there’s the scientific evidence to justify it.” On another occasion, Rubio said: “The government can’t change the weather. I said that in the speech. We can pass a bunch of laws that will destroy our economy, but it isn’t going to change the weather.”

Quite the contrary, Mr. Rubio. There indeed is scientific evidence to justify the claim that climate change is very real. Since just 2011, there have been an estimated 500 climate-related national disaster declarations, the Federal Emergency Management Agency (FEMA) reported. Higher temperatures produce more extreme weather conditions.

Moreover, we actually can do something to change the weather — or at least curb the effects of climate change. At the United Nation’s Intergovernmental Panel on Climate Change, scientists said that we should be working toward cutting carbon emissions. Otherwise we run the risk of facing “severe, pervasive and irreversible impacts for people and ecosystems,” ThinkProgress reported. With those very real risks on the table, elected officials’ choice to turn their heads and deny a reality seems all the more absurd.

Cheers to the Climate Change Fantasy Tournament, and may the very worst win.