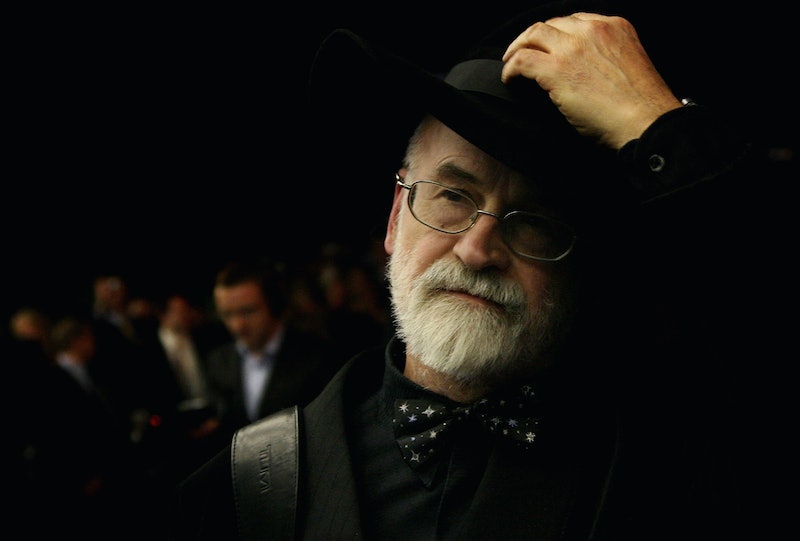 It's my brother's fault that I am a dyed in the wool Sir Terry Pratchett fan. (We'll miss you, Terry!) When I was about 12 and just getting into rock and pop-punk, my brother handed me Soul Music, one of Pratchett's books, which is about rock 'n' roll and literally involves rocks, music, and souls (as in actual souls, the kind that burn in hell and stuff).

Like most of Pratchett's novels (there are more than 70 and I've read at least three quarters of them, #noshame), that book was set in Discworld, an alternate universe where the world is a flat round disc balanced atop four elephants that are riding a giant turtle through space. Now, I'll admit, this may not sound appealing to all ladies out there, but trust me, Pratchett is worth your time, even if you're not a geek.

Pratchett's books are not your average high fantasy where women have zero personality, are just props for the male heroes, or whose standard outfit is busty and tits-forward. Pratchett's female characters can be described with a bunch of adjectives: powerful, interesting, ugly, fat, intelligent, old, beautiful, childish, smart, brave, foolhardy, innocent, conniving, and the list goes on. His male characters are the same. Sexual orientation, race, gender — these are all issues that Pratchett challenges in his Discworld novels.

Still doubtful? Here are seven reasons why Pratchett's books are for anyone, not just die-hard D&D nerds (as a D&D nerd myself, I am not being disparaging, I promise):

Yes, the concept of the Discworld is hilarious in and of itself, but the books themselves are a real hoot. For example, a couple choice quotes:

Or, regarding cats (which I love, but... Sir Pratchett has a point, cats are super-stylish):

If cats looked like frogs we'd realize what nasty, cruel little bastards they are. Style. That's what people remember.

Like really, actually, very clever. The main city that many of the books take place in is Ankh-Morpork, a city that operates in complete madness but is somehow still balanced by a dictator (one of the many, many social commentaries included in the book is this dictator's actions). You get to see a steady and intelligent progression of technology as the books move forward in time (there are a bunch of different series that all sort of take place on a parallel timeline, and there are charts that map how you should go). You get to see the telegraph being invented. You get to read about the mail system being reinvented and the evolution of money from coin to paper. You actually learn things about our own world (economic systems and social structures) without noticing it.

There is a whole set of books about a variety of witches, who prefer to use "headology" (i.e. psychology) rather than actually do real magic most of the time. My personal favorites are Granny Weatherwax, an old and very powerful witch who doesn't take flak from anyone, and Nanny Ogg, another old and quite toothless woman with a boatload of grandchildren who turns her mean ginger cat into a hunky ginger man for a while. Then there's the whole fact that gods are totally real and there's a bunch of them, too.

Terry Pratchett thought out his world carefully, bit by bit, and in the early books (The Color of Magic, for example) you can tell he's still getting his sealegs. But by the time he gets to the series about the City Watch or the Witches books (again, charts are needed, but all the books totally work as stand-alones, too) you can tell how much thought and creativity was put into creating the customs of Ankh-Morpork and the variety of species and races that live within it. From the Assassins' Guild to the smell of the river to the way the Night Watch sounds its bells, each book is filled with the details of a rich and very real world, even if it is balancing on four elephants who are standing on the back of a turtle who's flying through space.

I Shall Wear Midnight by Terry Pratchett, $9, Amazon

In Pratchett's most famous and central books, the female characters are assertive, smart, strong — but varied. He never falls into a trope unless it is purposeful, in order to mock and overturn it. For example, it is a slightly mad, very large, dragon-obsessed woman who becomes first the lover and then the wife of Vimes, the justice-seeking Captain of the City Watch. She starts out as a stereotype of a crazy rich cat (okay, dragon) lady, but ends up being one of the most beloved and well-rounded characters, constantly surprising both Vimes himself and the readers. Then there's the werewolf woman (yes, yes, the metaphor is obvious, periods also happen once a month) and she is the most badass and coolest of characters, an invaluable member of Vimes' team. And let's not forget the whole series of YA books devoted to Tiffany Aching, a young girl who doesn't know she's a witch and who is wild and wonderful.

They're full of wisdom

In between all of the hilarity of the books (which includes word-games like "Inn-Sewer-Ants" which, if you read it Britishly, is roughly the pronunciation of "insurance") Pratchett manages to convey some incredible wisdom in his books. He proves that satire is still a method that touches us and makes us think. Check out these quotes:

They say a little knowledge is a dangerous thing, but it’s not one half so bad as a lot of ignorance.

She was already learning that if you ignore the rules people will, half the time, quietly rewrite them so that they don't apply to you.

(Both of these quotes are from Equal Rites, one of Pratchett's early books in which he looks at the sexism embedded in the witch/warlock dichotomy. See? Feminism and social issues again, hurrah!)

Death in the Discworld books looks something like the Death from The Sims games — all cloak and scythe and bones and skull-grin — but he is also entirely lovable. He is rather innocent in the ways of the world, and when he tries to take time off from his job and do what regular people do, he gets bored awfully quickly. These are the sorts of things Death says:

Or, when asked what makes life worth living:

Death thought about it.CATS, he said eventually. CATS ARE NICE.

Oh, yeah, he also speaks in ALL CAPS ALL THE TIME. And he has a horse... a horse named Binky. How can you not love him?