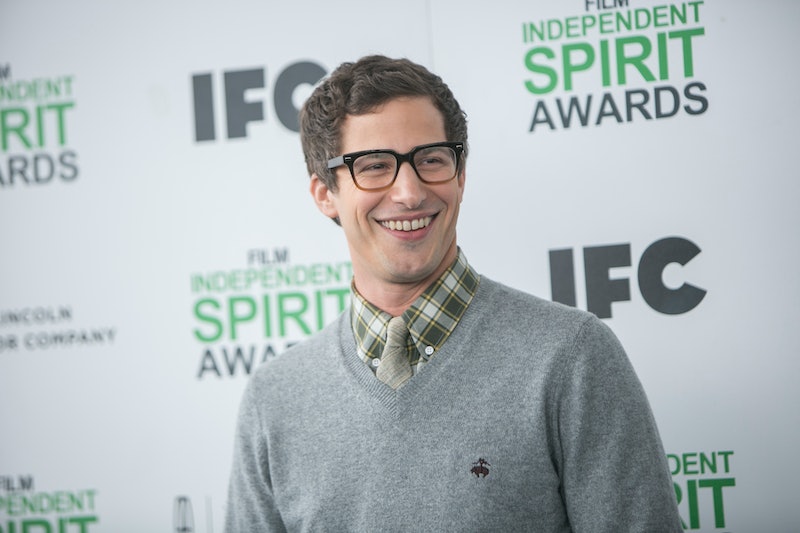 It's official: We have our host for this year's Emmy Awards, and he's kind of a funny guy. According to Deadline, Andy Samberg will host the 2015 Emmy Awards, which are scheduled for Sept. 20. The Brooklyn 99 star is no stranger to the award show — it was just last year that he took home the award for Best Actor in a Television Series, Comedy or Musical, for his role on the Fox sitcom. Now, instead of scooping up awards, he'll be the one helping to give them out — and it's a role that couldn't be more perfect for him.

Like with any award show, the Emmys have the opportunity to be a really fun night, but they can also go the other route and make everyone at home watching wish they DVRed the night instead. I'm a big fan of award shows myself, but even I know that without a killer host to guide us through the evening, the show can be, well, a snooze. Luckily, Samberg is host that will likely guide us through the show without a dull moment. Here's why Samberg is the perfect guy to host the Emmys, because we all deserve to have a good time.

He can nail a quick impression.

Just imagine how useful this will be when he needs to do one of Kathy Bates' American Horror Story: Freak Show accents.

He has the hosting thing down.

He's the master of digital shorts.

Nothing breaks up an awards show better than a music video featuring The Lonely Island.

If a live-action version of "Dick In a Box" doesn't happen, the Emmys will be wasted.

More like this
Selena Gomez’s ‘SNL’ Hosting Debut Had Twitter Gushing Over ‘Barney’ & Wigs
By Stephanie Topacio Long
Kanye Walked Out Of Kim's 'SNL' Monologue Because Of These 2 Words
By Jake Viswanath
Stormi Just Walked A Red Carpet With Mommy Kylie Jenner & Daddy Travis Scott
By Hugh McIntyre
What’s New On Netflix: A Victoria Justice Rom-Com & The Return Of David Letterman
By Arya Roshanian
Get Even More From Bustle — Sign Up For The Newsletter