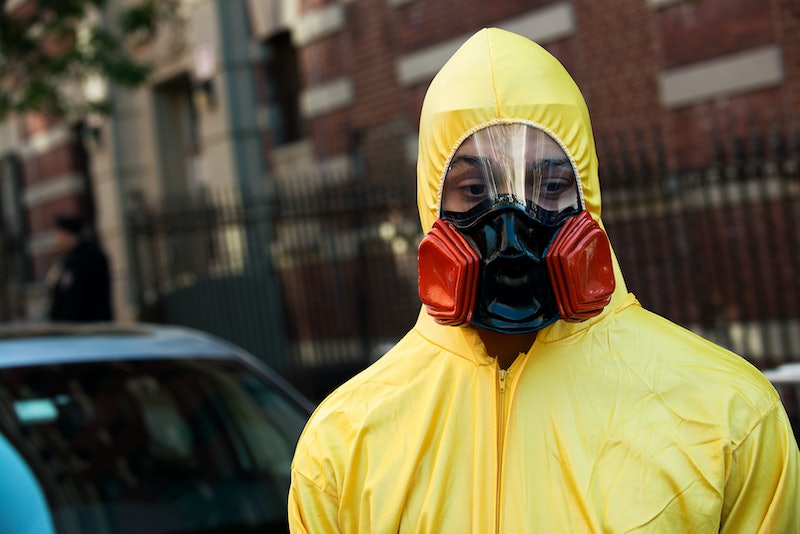 If you thought Ebola in the United States was gone for good, think again. On Thursday, the National Institutes of Health (NIH) announced that it would be admitting an American healthcare worker who tested positive for Ebola. The individual contracted the disease after volunteering in an Ebola treatment unit in Sierra Leone and, according to a press release from NIH, will be return to the U.S. “in isolation via a chartered aircraft.” He will be admitted to a special unit on Friday.

Thursday's announcement marks the second time that a patient diagnosed with Ebola will be admitted to the NIH Clinical Center. On Nov. 15, nurse Nina Pham was successfully treated for Ebola at the clinic.

But when did Ebola first arrive in the U.S.? The whole thing started back in late September with the diagnosis of Thomas Duncan. On Sept. 30, 2014, Duncan, a Liberian man visiting family in Dallas, Texas, was diagnosed. After being treated at Texas Health Presbyterian Hospital Dallas, Duncan died on Oct. 8. Duncan’s death led to the infection of two of the nurses that treated him and to the outbreak of general hysteria from the American public. Obama even appointed an "Ebola response coordinator," which become known as an Ebola czar.

However, although Duncan was the first to be diagnosed with Ebola on U.S. soil, he was not the first American to contract the disease. Missionary groups working in Liberia first reported that Americans had contracted the disease on July 27, 2014. Nancy Writebol and Kent Brantly were both treated at Emory University Hospital in Atlanta.

While yet another diagnosis of the deadly disease on U.S. soil may seem terrifying — and it's certainly tragic — it’s important to keep things in perspective. Of ten people who have been treated for the disease in the United States, only one U.S. resident, Martin Salia, died. In comparison, an estimated 24,350 people have been infected with Ebola in West Africa, according to new numbers released by the World Health Organization (WHO) on Thursday. Just over 10,000 people have died.

There is good news, however: overall, cases of Ebola have steadily decreased and TIME reports that Liberia recently said it did not have any confirmed Ebola patients in its treatment centers. But, as this recent diagnosis in the U.S. shows, it’s not over until it’s over.