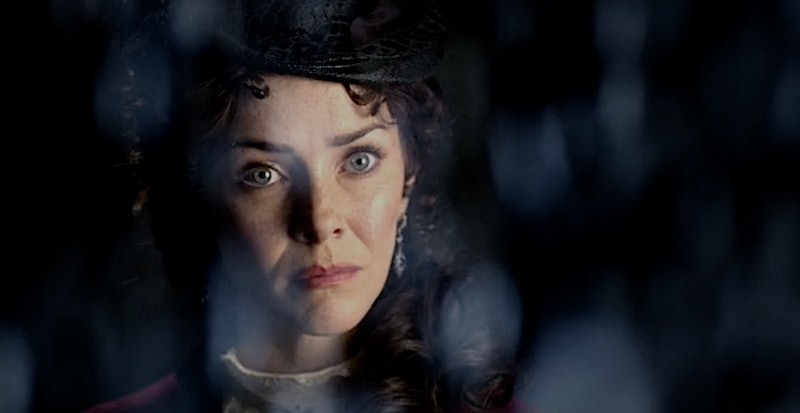 Ever since it was revealed that Lily Salvatore is alive and trapped in a 1903 prison world, dedicated TVD fans have been dying for some answers. Why is she trapped there? Who put her there? How did this come about? And now, thanks to Thursday night's Vampire Diaries episode "The Downward Spiral," we now know a few very pivotal details. You see, it turns out that Lily Salvatore is a ripper, who has killed at least 3,000 people over the course of her vampirism. That is, until she was stopped and imprisoned by the Gemini Coven, who made it their mission to stop her from spilling anymore innocent blood.

This information came courtesy of Kai, who struck a deal with Damon that if he helped arrange a conversation with Bonnie (allowing his new self to apologize for all the heinous things his old self has done), then he'd locate the ascendant for Lily's prison world that could help bring his mother back. And even though Damon held up his end of the bargain (though I think we should all be a little worried about Bonnie right now), Kai informed Damon that — as a semi-sane person — he highly suggests that they keep Mama Salvatore trapped right where she is. Why? Because after she was turned back in 1858, she faked her own death and started mass murdering people all throughout Europe. And in 1903, she had come to the United States to do the exact same thing, until Kai's coven put a stop to it.

So yeah, Damon and Stefan's mom is officially off the rails nuts and makes Stefan's ripper days seem like a trip to Disneyland. Speaking of which, I feel silly for not questioning Stefan's ripper trait before. At least we now know where he gets the urges from. Does this mean being a ripper is genetic? (Asking for a friend.) Either way, though, I'm now even more intrigued to see the type of mayhem Lily will bring to the table since I very much doubt Damon is going to forego his little rescuing mission even in light of this newfound intel. Perhaps we'll even get to see this lady vamp in action and I, for one, can't wait.

Mama's coming back, y'all. And she's thirsty.