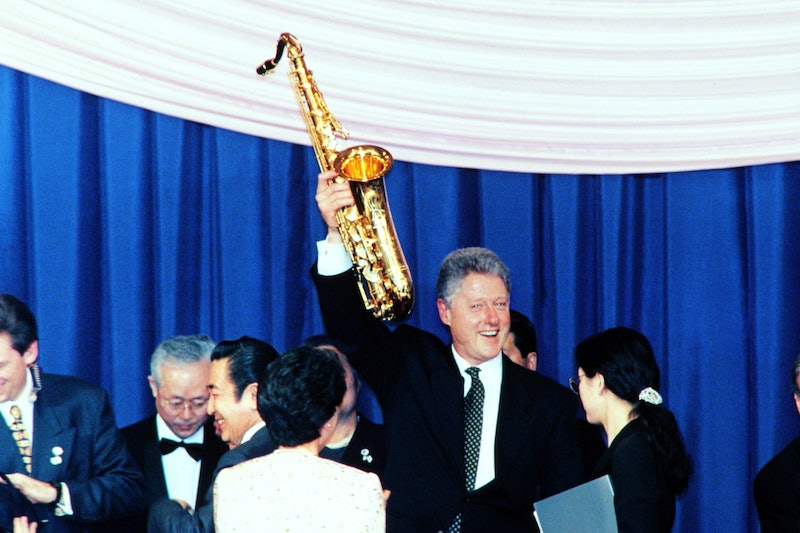 Someday, I told myself, someday choosing political science as my college minor would pay off. Today, my friends, is that day because I can verify for you that Barack Obama, who appeared on Jimmy Kimmel Live! Thursday night, may be the president who has appeared on the most late-night comedy shows, but he is far from the first one to try to reach a mass audience using a comedic venue. John F. Kennedy, Richard Nixon, Ronald Reagan, Bill Clinton — all of them made appearances on television shows that were not traditional serious news programs.

We'll get to the more historic stints on comedy shows by presidents and soon-to-be presidents in a moment. First, let's turn our attention to what was probably the most unexpected Obama appearance: when he showed up to plug the Affordable Care Act on Zach Galifianakis' mock show "Between Two Ferns." The two traded barbs with each other. “Is it going to be hard in two years when you are no longer president and people stop letting you win in basketball?” Galifianakis asked

Obama replied, “How does it feel to have a three inch vertical?”

But let's take a trip in the wayback machine to perhaps the most notorious presidential appearance on a television talk show. In 1992, then-Gov. Bill Clinton of Arkansas showed up on The Arsenio Hall Show, which was kinda like the 1990s version of Kimmel. But Clinton, who had already won one primary and was the clear favorite to win the Democratic nomination didn't just go on the show and crack jokes or talk politics; he put on a pair of shades and played "Heartbreak Hotel" by Elvis Presley on the saxophone. Yes. The saxophone.

Probably the weirdest soon-to-be president to try to win over a younger audience by showing up on television was Richard Nixon's 1968 appearance on the comedy show Laugh-In. The show, kind of a groovy precursor to "Saturday Night Live," had a character whose catch phrase was "sock it to me" (look, it was the 60s, they were all a little wacky). Somehow, the producers of the show convinced Nixon to come on and deliver the line , and it could not have been more awkward.

After Clinton went on Arsenio Hall, he took a lot of heat for his appearance, with some critics labeling the performance undignified. But it became clear that candidates who wanted to seek out younger voters would have to go where the voters were, and Clinton the candidate also appeared on MTV, at the time a radically unusual idea.

But sometimes, they just want to go on television and be funny. The newly-elected George W. Bush didn't need votes when he appeared on "Late Night With David Letterman" in 2000 to present the Top 10 list, which was "Top Ten Things I'm Going to Change in the White House." Regardless of how you felt about W as a president, his delivery in this sketch was not terrible, and he even poked fun at his country-boy persona: "You can't speak at meetings until you ride the mechanical bull."

If you want to go way, way back, then-Senator John F. Kennedy was on the "Tonight" show, with original host Jack Paar. Kennedy wasn't all that funny, talking seriously about politics, but it was clear at the time that he was ready to be president. He took questions from the audience (one guy asks him about the Communists, which at that time were a very scary possibility for a lot of Americans).

Making appearances in unexpected places has almost become par for the course for President Obama; he's done Google Hangouts, and interviews with YouTube stars. While his predecessors may have led the way, it's clear he has perfected the presidential version of giving the people, or at least, the audience, what they want.