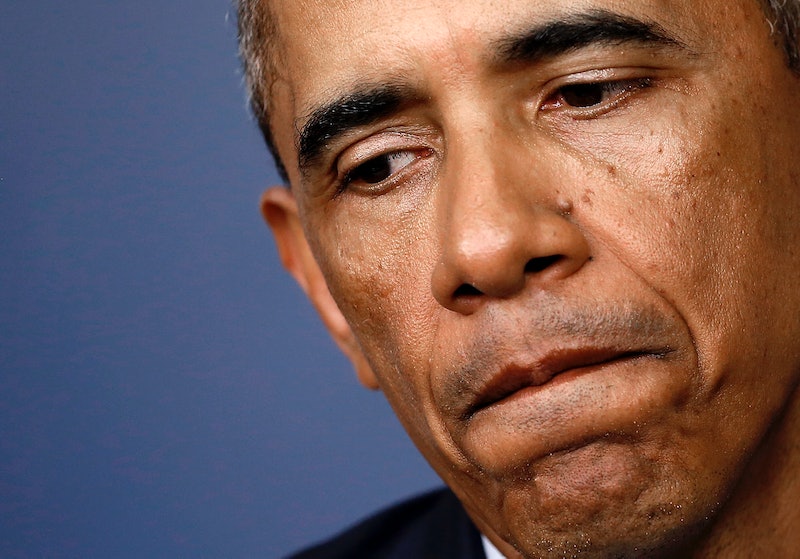 While late night talk shows are generally known for their witty banter and humorous outtakes, Thursday's episode of Jimmy Kimmel Live with Obama struck a somber tone when the president spoke about Ferguson. After a number of typical Kimmel shenanigans, including Obama's reading of the ever popular "Mean Tweets" segment, the subject matter took a serious turn when the president spoke of Wednesday's shootings of two police officers in Ferguson, Missouri in the latest outbreak of violence in the St. Louis suburb.

"What had been happening in Ferguson was oppressive and objectionable and was worthy of protest, but there was no excuse for criminal acts," Obama said. "Whoever fired those shots should not detract from the issue - they are criminals, they need to be arrested. And then what we need to do is make sure that like-minded, good-spirited people on both sides - law enforcement, who have a terrifically tough job, and people who understandably don't want to be stopped and harassed just because of their race - that they are able to work together to come up with some good answers."

The shooting came as a reaction to the scathing Department of Justice report that found a systemic pattern of racial discrimination in Ferguson's handling of legal and judicial matters, which has led to the resignation of a number of high-profile and embattled city officials, most recently Police Chief Thomas Jackson. The tragic death of unarmed teenager Michael Brown at the hands of Officer Darren Wilson last summer has catalyzed months of protests, both violent and peaceful, across the country. But even more significantly, Brown's death and the continuing occurrence of violence against black, brown and other bodies of color in the United States has contributed to what may finally be a productive discourse on race relations in this country, and the systemic racism that has adversely affected the lives of so many Americans.

Still, despite the undoubtedly well-justified anger of many minorities in the United States, Obama urged citizens to look towards non-violent forms of protest, citing Selma as an example. Said Obama about the famous march, which recently marked its 50th anniversary, "What was beautiful about Selma was reminding ourselves that real social change in this country so often has happened because ordinary people are willing in a non-violent fashion to make their voices heard." And while there is always room to improve, Obama reminded viewers that in some ways, the United States has made significant strides in terms of racial politics in the last five decades.