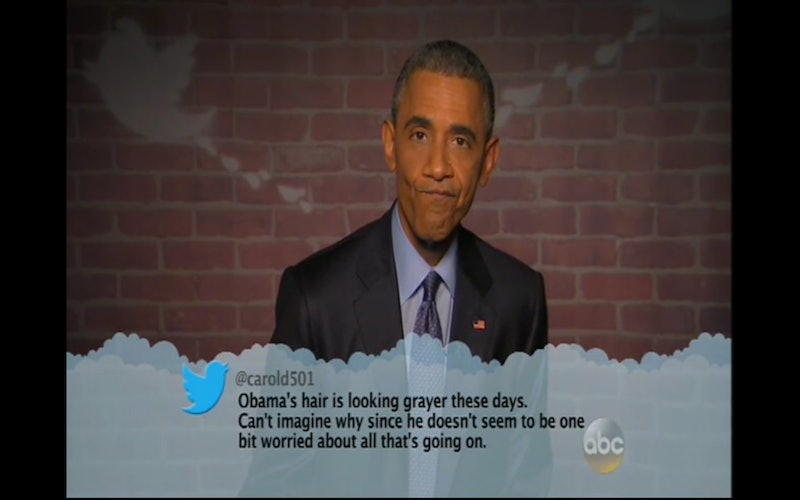 If there is one thing that is by and far my favorite thing about Jimmy Kimmel Live, it has to be the Mean Tweets segment. The sad background music is on point, the tweets are hilarious, and there's just something special about hearing words so awful come out of the mouth of the person they're about. On Thursday night's episode of Jimmy Kimmel Live, President Obama read Mean Tweets about himself, and it was truly everything I ever dreamed of. It was a perfect mix of Obama being both his hilarious and classy self, and the president on one of the best late night comedy segments was just wonderful.

Now, when Obama sat down with Kimmel for the full interview, he mentioned that in all reality, these hilarious, though mean-spirited tweets, weren't really that bad at all. In fact, Obama quipped, "Those weren't that mean. I gotta tell you, you should see what the Senate says about me." Too true, Mr. President, though disheartening.

If you're curious as to which mean tweets Obama had the distinct (dis)pleasure of reading, here's all of the ones he read on Thursday's episode. Let me warn you, it ends with Kimmel wearing some pretty epic mom jeans.

This was probably the meanest tweet there was tonight, starting out strong.

He replied that he would love that. Obviously.

Obama actually kind of liked that one.

To this one, Obama supplied my favorite retort, saying, "You know, the lol is redundant when you have the haha."

At this point, Kimmel came out to express that he didn't know why people were being so mean about the jeans.

And Obama realized, maybe they were right...