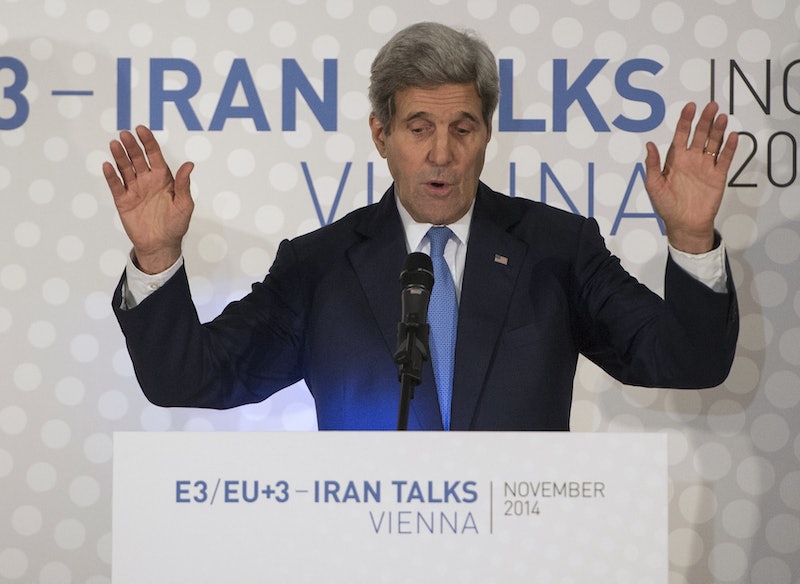 This week, Senate Republicans sent a letter to Iran instructing the country's leaders that any deal reached is temporary — so you'd assume a deal is coming soon. But when will a nuclear deal with Iran be negotiated, if at all? Well, the framework for a final Iran deal must be established by March 24, with a comprehensive deal by June 30. But it's a little trickier than just these dates.

Here's a little history of the Iran negotiations timetables — deadlines haven't been kept. In November 2013, a deal was aimed to be reached by July 2014. This didn't happen, and an interim deal was extended until November. Yet again, no avail. So another extension for a final agreement was confirmed to be the end of June this year.

In a December appearance at the Saban Forum, Secretary of State John Kerry dismissed the idea of a June deadline for an Iran deal as being too long of a projection: "I think the target is three, four months, and hopefully even sooner if that is possible."

Well, it's March, and we know that hasn't happened yet. So can we really take these timetables at face value?

Let's look at a statement by the State Department during a daily press briefing in February:

Yes. It is a goal, it remains a goal, but — and the secretary has been very vocal about that. We’ve never called it a deadline. We’ve called it a goal of when we want to achieve the political framework.

Later, Deputy Secretary of State Antony Blinken said to the Senate Foreign Relations panel that it's the White House's "strong intent to try and reach a basic agreement." Given the history of failed timetables, the State Department might now be using this language as a tool to buy additional time, should the "goal" of a March framework not be reached. Yet, there remains some hope for a deal; last week State Department spokeswoman Marie Harf was more optimistic about an Iran deal stating: “We believe we can get there by the end of March.”

What we've seen before are cyclical rounds of extensions and new timetable "goals." Realistically, there are a lot of parties involved and set dates are no guarantee for a deal. We still have a couple weeks until that framework "goal," and something meaningful can be assembled this month, then maybe, just maybe we will see a deal at the end of June. But who knows?