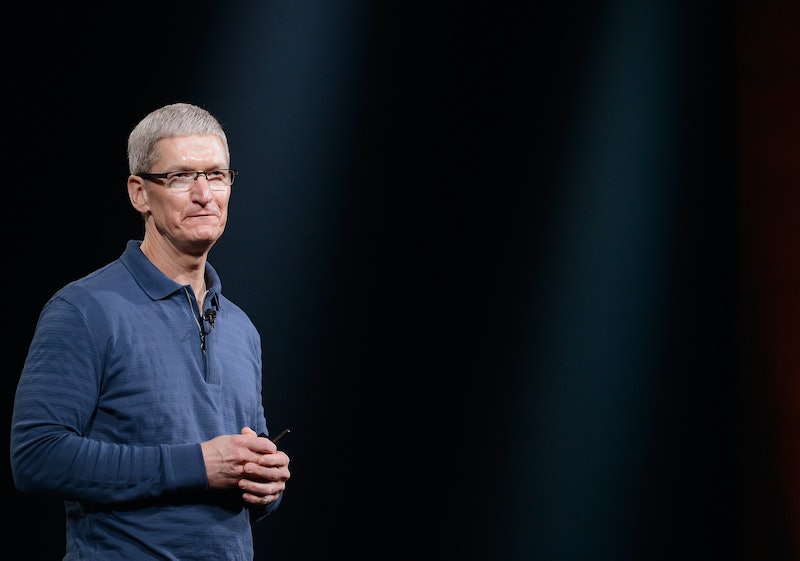 Most people know Tim Cook solely as Steve Jobs' successor at Apple, but according to an upcoming biography, their relationship was much more personal. As revealed in excerpts of Becoming Steve Jobs, which have been published on Amazon and Fast Company, the two were close friends, and Tim Cook even offered his liver to Steve Jobs when he was suffering from pancreatic cancer and waiting for a liver transplant. But it was Jobs' reaction that said even more about their friendship. The book will undoubtedly have many more anecdotes, but Cook's generous offer may be the most poignant illustration of their friendship.

Jobs was diagnosed with pancreatic cancer in October 2003, but didn't announce it to his employees until the following year. The headstrong Jobs refused to take conventional medicine and undergo surgery for months, choosing to combat his cancer with alternative medicine and a vegan diet instead.In Becoming

Steve Jobs , authors Brent Schlender and Rick Tetzeli write that by January 2009, Jobs' health had drastically declined and he was bedridden due to a condition called ascites, an abnormal accumulation of gastrointestinal fluids that occurred as a side effect of cancer. Jobs' frail and gaunt appearance stirred his right-hand man to action. After one of his many visits to see Jobs, Cook "left the house feeling so upset that he had his own blood tested."

The book goes on to say:

[Tim] found out that he, like Steve, had a rare blood type, and guessed that it might be the same. He started doing research, and learned that it is possible to transfer a portion of a living person’s liver to someone in need of a transplant.

Because the liver is a regenerative organ, the portion donated to the recipient will eventually grow to a normal, functioning size. Likewise, the partial liver that the donor will be left with will also grow back to full size. The book also mentions that roughly 6,000 living-donor transplants are made in the U.S. every year with a high rate of success for both donor and recipient.

Despite this, and despite Jobs' dire condition, the Apple boss adamantly refused. After performing a series of tests to verify his compatibility, Cook visited Jobs again to propose the idea. Here's what happened, according to the excerpt:

"He cut me off at the legs, almost before the words were out of my mouth," said Cook. "'No,' he said. 'I'll never let you do that. I'll never do that.'" "Somebody that’s selfish," Cook continues, "doesn’t reply like that. I mean, here’s a guy, he’s dying, he’s very close to death because of his liver issue, and here’s someone healthy offering a way out. I said, ‘Steve, I’m perfectly healthy, I’ve been checked out. Here’s the medical report. I can do this and I’m not putting myself at risk, I’ll be fine.’ And he doesn’t think about it. It was not, ‘Are you sure you want to do this?’ It was not, ‘I’ll think about it.’ It was not, ‘Oh, the condition I’m in . . .’ It was, ‘No, I’m not doing that!"

Cook also emphasizes that Jobs has only yelled at him four or five times over the course of the 13 years that they knew each other and this was one of them.

Jobs died on October 5, 2011. Since then, Cook has taken the reins and led Apple to continued success, with accomplishments including the rapid-selling iPhone 6 and increasing Apple's market capitalization by more than $300 billion. But before he was his successor, Cook was one of Jobs' closest friends. Every year since Jobs passed away, Cook has sent a commemoration email to his staff on the anniversary of his death.

In the most recent one from last October, Cook remembers his old friend and boss:

Sunday will mark the third anniversary of Steve’s passing. I’m sure that many of you will be thinking of him on that day, as I know I will. I hope you’ll take a moment to appreciate the many ways Steve made our world better.

He ends every letter by thanking his employees for helping to continue Jobs' vision and legacy, but, really, nobody deserves to be thanked more than Cook himself.Images: Getty Images (3)