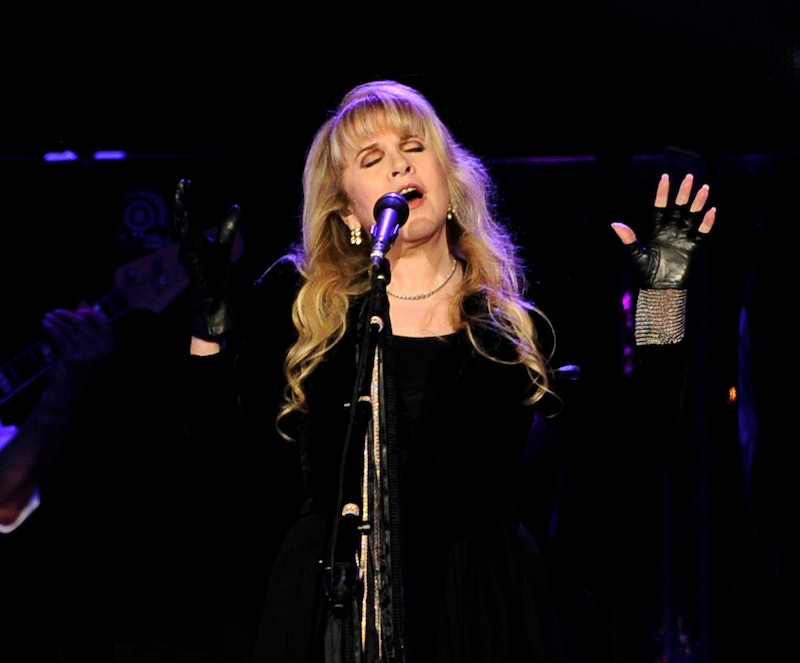 On Wednesday night, a rumor that plagued Stevie Nicks in the 1980s returned. Misty Day (Lily Rabe), one witch of many on American Horror Story: Coven, states matter of factly that of course, Nicks is a famous witch and that one of the Fleetwood Mac songs she wrote, "Rhiannon," is her witchy anthem. This would be a funny little quirk, like watching Michael Jackson jokingly play himself as an alien in Men in Black II, if Nicks hadn't spent a great deal of the '80s trying to squash this very real rumor, only to see it trotted back out for the purposes of a campy horror TV show. As it turns out, Nicks gave Ryan Murphy permission to use her. But it's important for the younger folks out there (you know, the ones who, like Zoe, only know Nicks as that mentor from American Idol), Stevie is not actually a witch or a practicing Wiccan, however great her aesthetic may be for AHS' purposes.

Still, the haunting repetition of "Rhiannon" in each scene featuring Rabe seems hell-bent on driving the point home: Nicks is one witchy woman. But his is all for fun, people. True, Nicks shrouds herself in long, black dresses — the well known style preference of witches everywhere... except on American Horror Story. She used to introduce "Rhiannon" as "a song about a Welsh witch" — a testament to her knowledge of Welsh mythology, in which Rhiannon is a witch-like goddess. And sure, "Rhiannon" is a song with a haunting melody that gives you the sensation of spells being whispered through spindly tree branches in fall, but that just means Nicks is so talented she's capable of transporting her audience to another place and time. None of this means she's got keys to a flying broom stashed somewhere.

But, if that's still not enough of an explanation for you, let's look at the lyrics of "Rhiannon" themselves.

Rhiannon rings like a bell through the nightAnd wouldn't you love to love her?Takes to the sky like a bird in flightAnd who will be her lover?All your life you've never seen a womanTaken by the windWould you stay if she promised you heaven?Will you ever win?

I know those of you on the witch train have already translated "bird in flight" to "lady on a broom," so knock that off. "Rhiannon" is a song about a very exceptional, and very real girl. It is not Nicks' public confession about being a member of a coven. The lyrics speak of a free bird of a woman. She's intoxicating, like the song itself, and Nicks gives her a slightly supernatural element in her ability to enrapture us.

Plus, if you know the story of "Rhiannon," you know that Nicks read the name in a book she bought in an airport and simply thought it was lyrical, pretty name for a song. The knowledge that Rhiannon was a Welsh goddess came later and the connections between the song and the legend miraculously matched up in many respects. If anything, Nicks looks like the victim of supernatural intervention here, not the perpetrator of such things.

However, if Stevie Nicks needs to be a witch in order for Lily Rabe to waltz through the forest and send alligators after awful people while wearing shawls and twirling whimsically, then we'll let this rumor stay, but only in bizarro AHS world. After all, Nicks doesn't enjoy being thought of as a witch; she spent years fighting those ruthless rumors. And if you choose to believe AHS' minor assertion that she is a witch despite her protestations, shouldn't you be worried that she'll seek vengeance with a hex or a spell or some new-age version of one of those things? Think about it.

More like this
Christine McVie Dies At 79 & Fleetwood Mac Reacts With Touching Tributes
By Radhika Menon
The First Trailer For 'That '90s Show' Includes So Many Nods To The Original Series
By Jack Irvin, Alyssa Lapid and Grace Wehniainen
'Gilmore Girls’ Lauren Graham Just Revived Our Hopes For A New Reunion
By El Hunt
The 'Ugly Betty' Cast Just Reunited In The Best Way
By Sam Ramsden
Get Even More From Bustle — Sign Up For The Newsletter