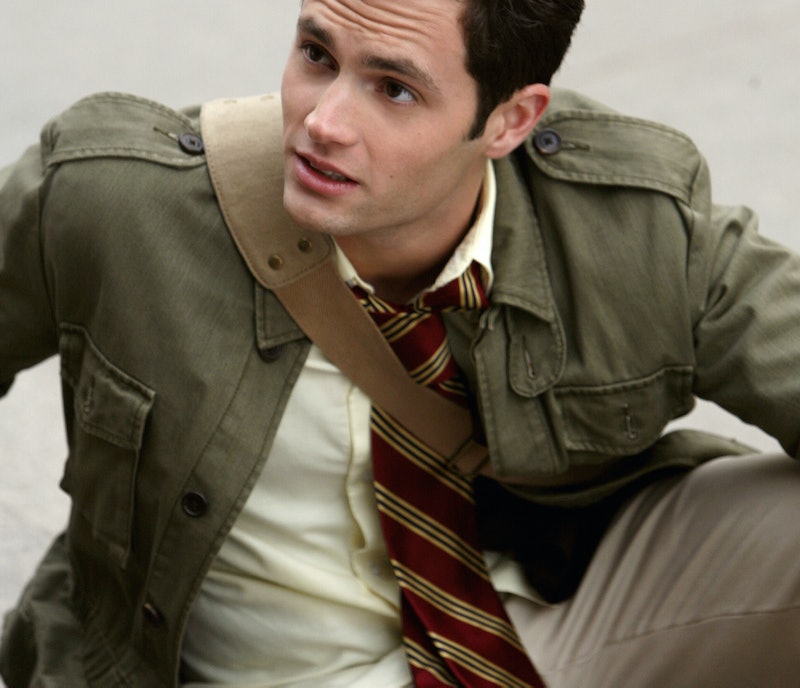 I think it's understandable for Penn Badgley to want to take a sabbatical from television after the whirlwind that was Dan Humphrey. Of course it got awkward, with Badgley being forced to kiss ex and Gossip Girl costar Blake Lively through the latter seasons, but I'm thinking it was probably more stressful playing a doe-eyed sociopath for six years. And if you zoned out somewhere around Season 3 of the greatest show of our time, you're probably a bit baffled by this statement. Rest assured, Dan Humphrey's evolution was not a positive one, though it was interesting to watch.

From subtle judgments of the elitists who spurned him to several years of Upper East Side dethronement, I tracked, season by season, the journey of the Brooklyn underdog/evil mastermind. This was a heartwrenching retrospective to compile, because who would guess that Serena's meek writer boyfriend would turn out to be so devious? Alternately, who would ever think Chuck Bass, who tried to rape two separate girls in the pilot, would end up being the romantic hero of the series?

Truth is, kiddies, Gossip Girl, both the show and the character (ahem), had some major problems. But you know you loved her.

Season One: From Lonely Boy to Slightly Judge-y Heartthrob

Dan debuts on the scene as an outsider, a nerd, a quiet writer from (gasp!) Williamsburg (or DUMBO — they were always unclear with that) that's been in love with golden girl Serena Van Der Woodsen since he was a freshmen. When Serena returns to the UES, he sees this as an opportunity to strike. Now, Lonely Boy is on the Gossip Girl radar, entering the dialogue of Manhattan's elite by becoming Serena's Brooklyn boyfriend/charity case, depending on how you see it.

Though their relationship is inherently sweet, and a first for former party queen S, it's peppered from the get-go with Dan's judgements on the upper class — particularly of his whimsical girlfriend, which is ultimately what breaks them up. Early on, Dan plants seeds in Serena's mind that despite what Gossip Girl says, she's not good enough for him, not the other way around. So post breakup, his cache has definitely gone up, because, seriously, who dumps Serena Van Der Woodsen?

Dan starts Season 2 with far more game than before, making on girls in the library, bedding teachers who somehow look younger than the students... Apparently, his sexual prowess and appeal benefited from his Serena sabbatical. Of course, those two crazy kids try to make it work, because S is attracted to him like a kitten with catnip, but they call it quits after it's revealed their parents had a secret child together. Ugh, dammit, Scott.

While he's nabbing the lead in The Age of Innocence, he's weaving his way into Chuck Bass's insecurities for an exposé, and he gets into Yale (but somehow goes to NYU, like NYU is cheaper). Though still not popular, Dan is successfully infiltrating the world that he claims to despise. Gossip Girl titles him the "ultimate insider," and, as Blair says, "Your label was the only one that was true."

The ultimate power move of the season, in my opinion, is when Blair Waldorf crawls hands over knees to Dan's door, begging him to teach her how to be cool. Um. Metaphorically. Of course, NYU values a scruffy Brooklyn hipster over an Upper East Side Queen. Of course.

Yeah, Georgina's baby ends up conveniently being not his, so that plot is unraveled. Dan is briefly involved in a highly publicized Serena-Nate love triangle, which I forgot about completely. I think it ends with Nate dating some guest star and Dan dating Vanessa and Serena dating a teacher, so nobody won that round.

The most significant plot, however, is Dan's blossoming feelings for Blair, which grow as they intern together at W magazine. Though on the surface this plot mostly just makes Dan look foolish, because Chuck is Blairs One True Love (meh), it's laying groundwork for bigger things to come.

Dan serves as Blair's lap dog for the first half of the season, through her quickly written-off pregnancy and her dumb engagement to a prince. He appears to be the one who truly loves and understands Blair, and, through enough viewer support, Dair is eventually born. Of course, their relationship is nearly a Dan and Serena redux: they try to mesh together their lifestyles, they're having weird sexual issues, there's a love triangle on the horizon... Blair chooses Chuck in the end, but Dan proved his worth by stealing away the princess bride, and this earns him swag bucks.

More important than anything though, Dan inadvertently gets his book published, capitalizing on his status as the "ultimate insider." Vanessa published it anonymously without his consent, and, though he resists it at first, he ultimately comes out as the author. Basically the book gives him a modicum of fame and makes everyone on the Upper East Side look like garbage. It's all coming together...

Dan's out for blood in Gossip Girl's final season, as he vindictively writes the REAL novel of the Upper East Siders elite. Each serialized chapter basically focuses on how awful his friends and family are. It reads like a handful of angry blog posts from a 12-year-old who wasn't invited to see Kung Fu Panda with his group of friends. Rave reviews all around.

But the most shocking revelation of all comes after he reestablishes ties with Serena... He's been Gossip Girl all along. So basically this makes us reexamine the entire series, and look at how Dan deviously wrote himself into a narrative he otherwise couldn't afford. He spitefully talks smack about everyone, particularly the girl he claims to love, taking her down a few pegs. Once she's at his level, he latches on, and then breaks off, proving a more interesting character. He adds himself into the Non-Judging Breakfast Club only to manipulate their emotions and ruin their lives with his words. And he only reveals his identity when it could be construed as the ultimate power play.

Obviously Serena thinks this is romantic and they get married. Done with the world.