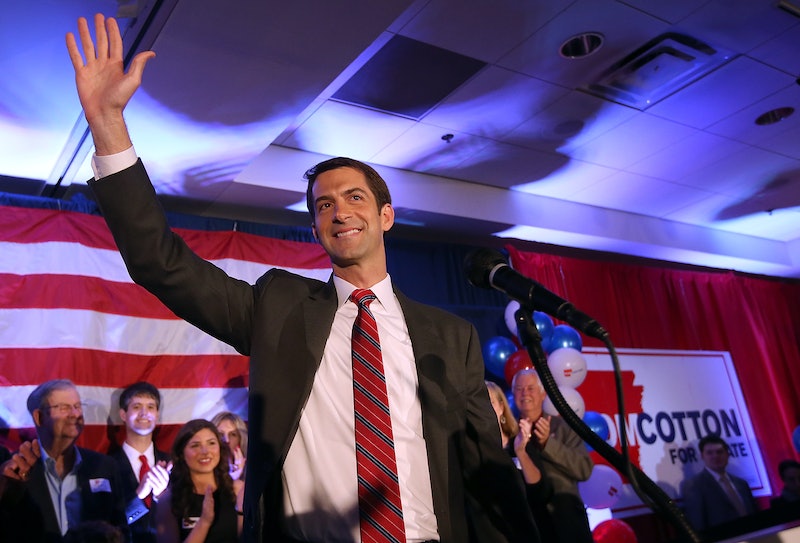 There are are over a dozen Republicans vying to become the party's nominee — even though it's still pretty early in the race, and we could still see some new additions before the fall GOP primary debates. Senator Tom Cotton was the primary author of the letter to Iran, commanding the attention of the Republican ranks and the media. But could this letter set the stake for a Tom Cotton presidential run?

For better or for worse, the letter penned by Cotton gained significant traction among those in the Republican Party. This could just be the launch of an even bigger political career. He stands as a major critic of the Obama administration's engagement with Iran, something that could rally the more hawkish members of the right.

At 37, Cotton is the youngest member of the Senate, and is a veteran of the wars in Iraq and Afghanistan. Regardless of whether you believe the message he sent to Iran, he's got a unique background that could rival others in the GOP field — recent military experience. He could certainly play himself up as a foreign and defense policy leader on the campaign trail. Right now Lindsey Graham appears to have a monopoly on that from the pool of potential 2016ers — though his comments about deploying the military against Congress aren't working in his favor.

He's certainly getting the attention of some of the current potential Republican nominees. Both Bobby Jindal and Rick Perry asked to become signatories of the now famous Iran letter. Jindal even tweeted to Vice President Biden asking him to apologize to Cotton.

OK, so they may not be behind him for a 2016 run, but it doesn't hurt to be recognized by ranking members of the party especially so early in his career. This letter did that for him.

Supporters from his native Arkansas are looking to make a Cotton presidential run easier. His actions toward Iran inspired a bill in the state legislature that would allow him to run for both president and the Senate. Current law forbids this. Reflecting on the on the move, Republican state Senator Bart Hester said to reporters: “Tom Cotton would be my current idea of someone who should be afforded this opportunity."

So a 2016 run may not be the most feasible, especially considering Cotton's only been in office a few months. So a 2020 run might be more likely. Even if Cotton waits, the traction he has gained from the Iran letter could give him enough momentum to become a leader in the senate so that he could stage a run for president later. Like Paul Ryan, Cotton will probably sit out this time, posing a run when its more politically palatable in the future.