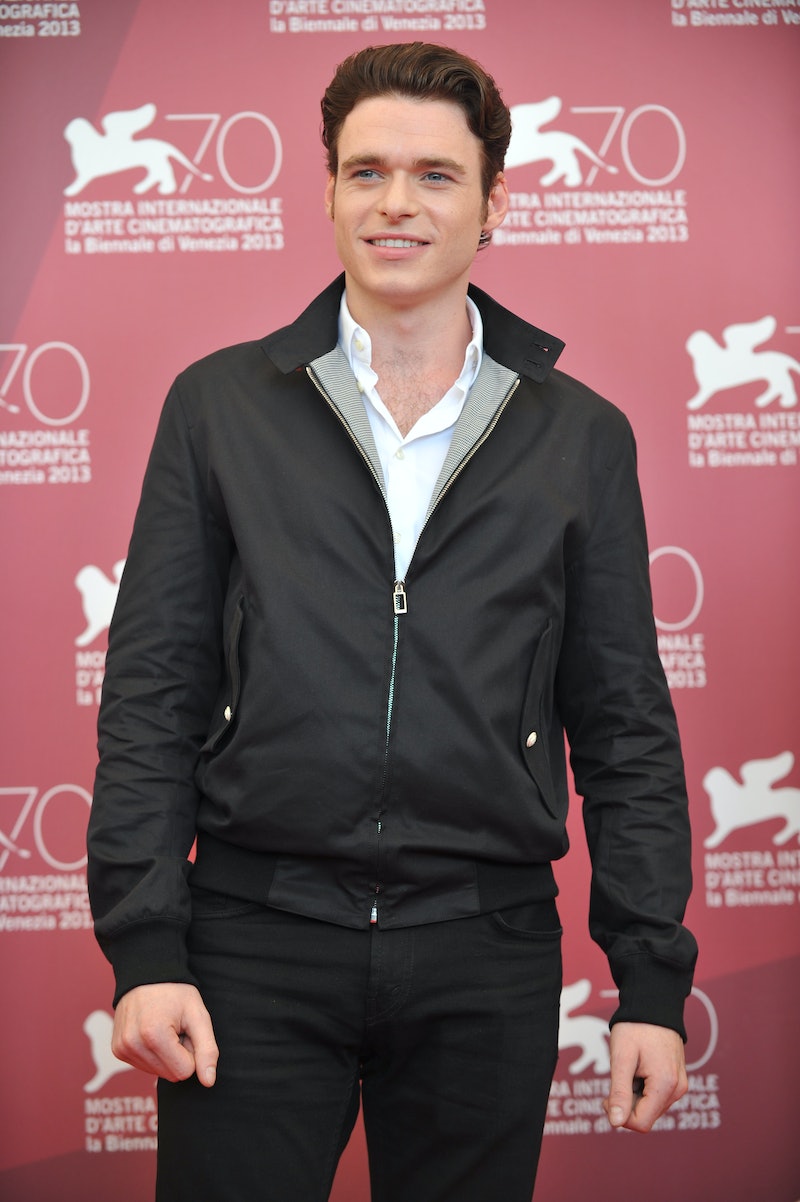 Richard Madden is known for his part as the now-deceased Robb Stark on the TV series Game of Thrones, but even if you're not into GoT, you might be familiar with his face. Especially recently, since Madden is playing the role of Prince Charming in Disney's live action Cinderella movie. He really does look like the ideal Prince Charming, but does he have a Cinderella in real life? In other words, I want to know if Richard Madden is single?

Well, of course he's not single. He was Robb Stark and is now Prince Charming. He has to have a girlfriend. In fact, he's been a long term relationship with actress British actress Jenna Coleman. You may not be familiar with her yet, but she is pretty well-known in Ireland and the UK for her roles on Emmerdale, Dancing on the Edge, and Waterloo Road. She is also a new star on Doctor Who in 2015.

The couple has been together since 2011, at least from what I can gather, and it seems these two prefer to keep their private lives private. They do not even Instagram each other. Yes, I actually checked both of their Instagram accounts. Even so, they do talk about each other from time to time and the anecdotes they share are pretty precious.

In an interview with RadioTimes, Coleman said,

I’m a bit embarrassed. I’m quite a chatterbox. I could chat all day about my boyfriend, but when I see it in print there’s something that makes me feel shy all of a sudden. I think it’s the idea of being, ‘Hey, everybody look at me!’ I don’t like it looking as if I’m talking about myself a lot, as if I think I’m great.

This is probably the most we are ever going to get from Coleman about her relationship with Madden and it's pretty ironic since she is talking about not talking about him. In another RadioTimes interview, she was asked if "the relationship was going well" and all she said was “Yes, thank you.”

Richard Wants To Appear On Doctor Who

When discussing Coleman's role on Doctor Who , Madden exclaimed to RedEye Chicago, "I think I was more excited than she was [when she got the role]. I was like 'What?!'" So does that mean he wants to join the cast now that he's done with Game of Thrones? Maybe. In an interview with Zap2it , Madden was asked if he would consider acting on the show and the actor admitted, "That would probably be weird. I'd love to be in Doctor Who one day, but maybe not while Jenna's in the show."

I don't blame Madden for wanting to separate his professional and personal life, but the fact that Coleman just got this part makes me think that she won't be leaving the show any time soon. Maybe they could just play characters that refuse to publicly interact? That would be like art imitating life, right?

Jenna Was Very Invested In Game Of Thrones

Just like most of the world, Jenna Coleman is very emotionally involved with the TV show Game of Thrones. Plus, her boyfriend had a leading role, so of course she was tuning in ever week. She told a funny story in a Mirror UK interview about an encounter she had with a fellow Game of Thrones fan:

I was in the hairdresser’s and ­someone said, "I have to talk to someone about Game of Thrones." I was like, "Yeah. I've watched it," and we chatted for ages about it. People are obsessed about it. They didn't realize I was his ­girlfriend. When Richard was killed off it was ­horrifying. Watching those scenes was gut-wrenching.

So she may not be comfortable talking about Richard Madden, but Robb Stark is an OK conversation topic? It's too bad that character is killed off the show then.

When asked about their relationship, Coleman started to open up a little bit more in a Mirror UK interview when she said,

My boyfriend is ­amazing. He is in Canada now doing a show for Discovery. Long ­distance is all part of it. I am 100 percent behind him in ­whatever he wants to do and he has been really great with all my stuff. We had an amazing summer together.

Madden and Coleman are pretty elusive, but the anecdotes they do share make it clear that they are a lovely couple. Not every actor wants to be a celebrity, some actors just want to act, and we have to respect their privacy. Nevertheless, I am sure that there will be some more sweet quotes from time to time. We just have to sit back and wait for more.