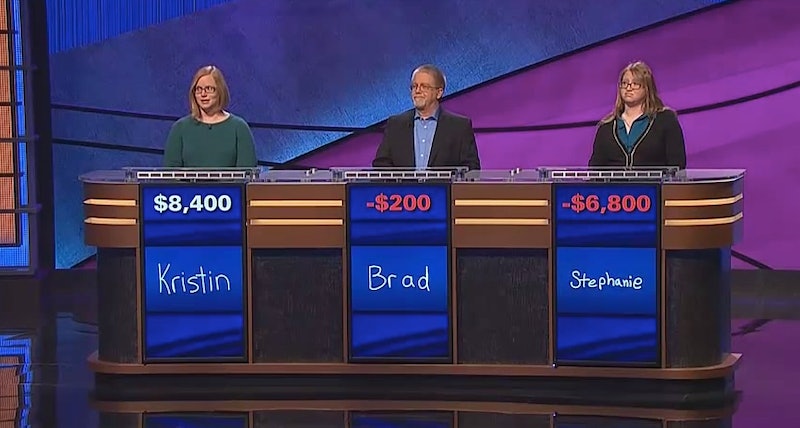 ICYMI, Thursday's Jeopardy episode was a major one: In a rare occurrence, the game happened to be so difficult that only one player made it to the final round — and by the time the buzzer sounded near the end of Double Jeopardy, two of the contestants had negative money, which disqualified them from even competing in Final Jeopardy. Whomp whomp. But for as bad as we feel for Brad and Stephanie, who lost out to winner Kristin Sausville by default, the main question ringing in many of our brains is about the negative money aspect. Because what happens if you get negative money on Jeopardy ? If you end the show in the red, does that mean you owe them money? That would suck a whole bunch, so I can't imagine they'd do that — so, maybe you just leave with nothing?

Or, if you're like me, maybe you do some research and find out what the real deal is, and then write about it so everyone else knows too. That's what's about to happen.

According to episode 4089 of the series, turns out that no matter how you finish in the rankings — and what your final dollar amount is in winnings — you don't walk away empty-handed. The winner, of course, gets to keep their winnings and are able to return to compete on the next show against two new contestants, but it's slightly different for the second and third place winners: The two of them instead get consolation prizes, even if they end up with negative money. Their cash total below zero just means they've lost — nothing more, and nothing less.

It hasn't always been this way, though. According to Mental Floss, up until 1984, everyone received the full value of their cash winnings, even if they hadn't won overall — but Jeopardy had to put the kibosh on that because after a certain point when it became clear to contestants that if they weren't going to win, they were better off hoarding their money and refusing to participate or guess so they wouldn't lose any more. So back then, ending in negative money just meant walking away with nothing.

To address that problem, from 1984 to 2002, the show gave second and third placers non-cash items like vacation getaways and merchandise that was donated by sponsors.

But, as the show has iterated, since May 2002 and up until today, non-winners take home a set amount of cash: Second-place winners nab a cool $2,000, while third-place finishers get $1,000 — money that's intended to at least cover their flight and their hotel, since the show doesn't typically pay for that.

So now you know! Hopefully it'll come in handy the next time you're on Jeopardy — just remember to phrase your answer in the form of a question.

More like this
Which RHODubai Housewife Has The Biggest Net Worth?
By Hugh McIntyre
Here’s Everything Coming To & Leaving Netflix In July
By Grace Wehniainen
Paramount+ Wants To Take Over Your Netflix
By Sophie McEvoy
What’s New On Netflix: The Return Of 'The Umbrella Academy'
By Arya Roshanian
Get Even More From Bustle — Sign Up For The Newsletter