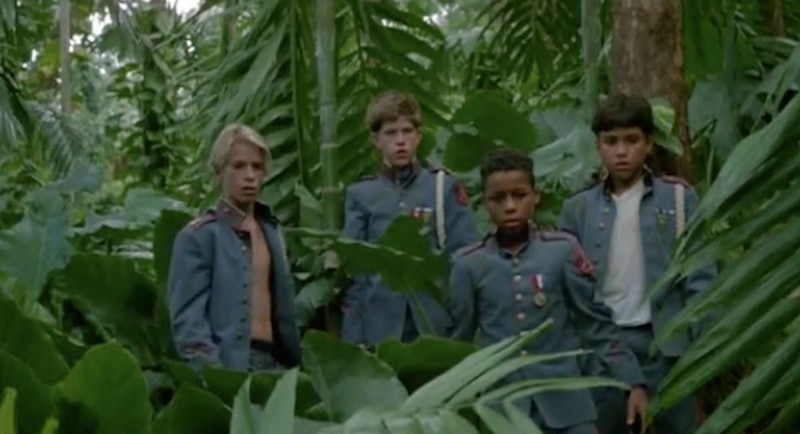 Can you believe it's been fifteen years since the last film adaptation of William Golding's Lord of the Flies? Back then, we didn't need dystopian worlds like The Hunger Games and The Maze Runner to justify kids killing one another. The novel posed a scenario in which it all it took were some hard truths about human nature and isolation. The film, directed by Harry Hook, was pretty gruesome. It was like Stand By Me, but a leech attack wouldn't even phase you. The boys were filmed in 1988, and the film was released in 1990. Fifteen years later, do you still wonder how you'd fare on a deserted island? They aren't all hidden with hatches and polar bears like on Lost. Remember the scrappy young cast? Are you at all surprised that the two most successful actors out of this bunch were the kids who played Ralph and Simon? Like, of course it's Ralph and Simon. Jack's too much of a Draco Malfoy, while Piggy and his ass-mar never had a chance.

The 1990 film is quite different from the book. The students are American instead of British, and the grown-up pilot is with them for a while. My English teacher sort of begrudgingly showed us this version, but "only so that we could compare it" to the 1963 black and white adaptation of Lord of the Flies that's directed by Peter Brooks and in the Criterion Collection.

Balthazar Getty, who comes from the prep school background you'd expect of Lord of the Flies, starred in Brothers and Sisters and Alias as an adult actor. He is the grandson of J.P. Getty, who Teen Magazine called a "legendary millionaire." Remember the 90s, when millions of dollars made you a legend? That's chump change compared to today's one percent.

Back then, the young actor was selected as a "Foxy Find" in Top Magazine. Today, you've seen James Badge Dale on 24, The Departed, The Pacific, Rubicon, Iron Man 3 and World War Z. He also admits that he was teased as a kid after this performance and took a break from acting until he was older.

This is in the books, and the 1963 film (pictured above) as well. Piggy's glasses are used on the island to light a fire. However, Piggy is short-sighted, and those kinds of lenses don't work that way.

It Was Supposed To Be Even More R-Rated

The original script called for scads of swearing, but the studio didn't want to force kids to swear if their parents didn't want them to. Because you know, simulated murder is fine but Heaven's to Betsy, don't let the children say the f word! I can't imagine how much was in the screenplay, considering I remember quite a bit from the film itself!

The producer, Lewis Maitland Allen, won several Tony Awards, including the original production of Annie on Broadway. Lord of the Flies and Annie both have young casts, but boy are they different! Allen was also married to the screenwriter.

There Is A Female Screenwriter

Who says women can't write convincing male characters? Jay Presson Allen was a playwright, who wrote this script under the alias "Sara Schiff" and was recognized for her adaptation of the musical Cabaret.

They Lost A Youth Ensemble Award To Kindergarten Cop

That had to have stung. Winners that year included unknown actors such as Raven-Symone, Neil Patrick Harris, Christina Ricci, and one of their fellow nominees that went home empty-handed was none of than Leonardo DiCaprio.

It Was Spoofed By The Simpsons

The episode "Das Bus" refers to the film's ending, in which a US Marine officer in the midst of his own adult war rescues the boys, rather than the book's ending that puts more emphasis on the boy's condition when confronted by "grown-ups."

Per child labor laws, the boys went to school on the island when they weren't filming. However, according to this interview, not only did they get a little "method" with their roles in the group, but they threw quite the parties in one of the empty classrooms.