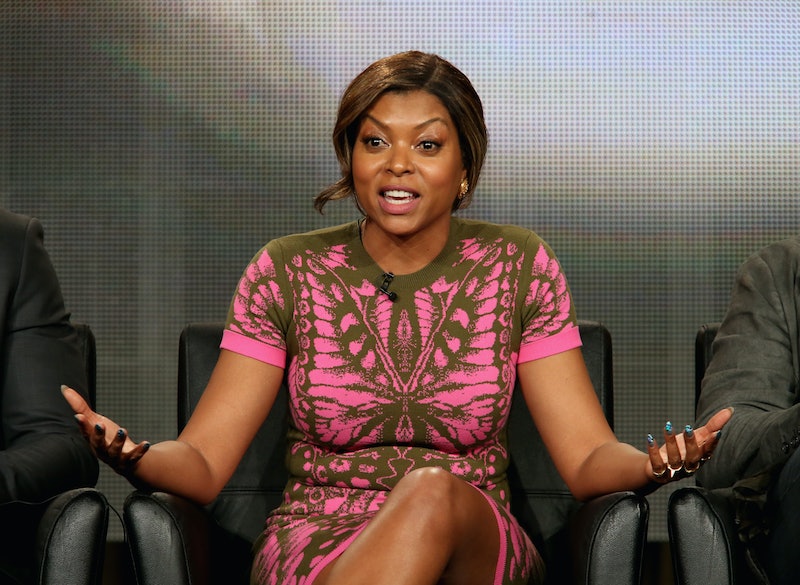 Fact: there cannot be an Empire without Cookie Lyons. In a show that already has everything from Shakespearean drama, to undeniably catchy music, to superstar cameos (hello, Oprah), the Fox hit would not have captured audiences as much if it didn't deliver Cookie, deliciously played every week by Taraji P. Henson. Even with all the action and twists that's happened on the first season so far, there's still much to learn about the show's HBIC, but one thing we do know for sure is that Cookie dresses like a boss. During Empire's Television Academy panel, Taraji Henson opened up about Cookie's fashion and how it helps to bring her colorful character to life.

"We have decided that Cookie is an animal," Henson said. "One that preys, so she's in a lot of prints. There also needs to be an arc. She went away for 17 years. So she needs to be 17 years behind the curve in her fashion. So sometimes she puts on a little too much print, like your eyes cross. But you know, it's Cookie, so she does."

The Oscar-nominated actress also explained how her own style blends with Cookie's fashion sense. "I know what looks right on my body," Henson said. "I understand who this woman is. I understand the time that she walked out of, so they do all the shopping and they bring up the stuff to me, and I'll go, 'This, this, this, or this.' And I try it on, and whatever fits and looks right, that's what I pick." Henson added that there is one thing that she won't turn down for the sake of her character.

"They bring me jewelry and I just try to put it all on because Cookie would!"