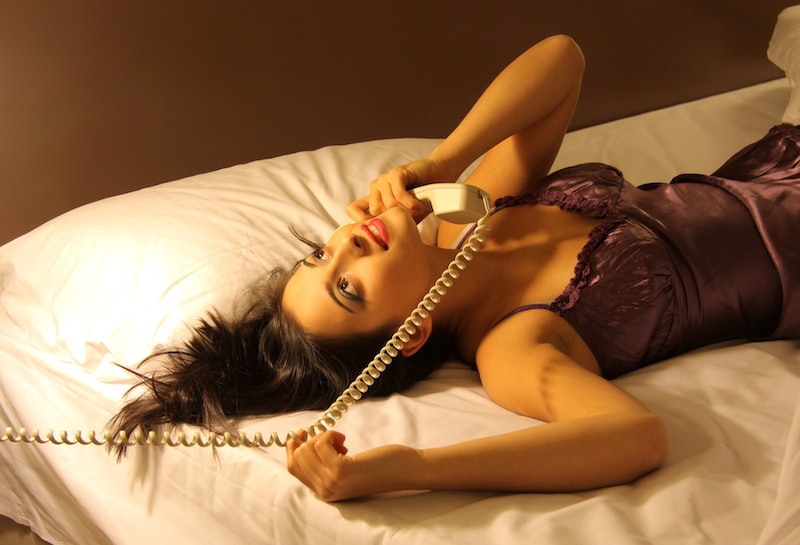 Frustrated that your partner won't put down their smartphone? We're about to give you serious ammunition. A small British survey has indicated that 40 percent of people put off sex for texting, using the Internet, and making phone calls. One third of participants said they had actually picked up a god damn telephone call during intercourse. Let me just take one moment to address how truly atrocious this fact is. It's like I woke up this morning and Jon Hamm's character in Bridesmaids had given viral dating lessons to the general public overnight.

Anyway, the study was conducted across England, where various couples were interviewed and the ugly little truth reared its techie Android head. Somewhere, someone is weeping. Oh wait, it's me. I myself have fallen victim to a partner's addiction to the internet; sometimes it seems sites like Reddit and 9GAG hold some sort of insidious, magical power over the male population. In instances such as these, it takes serious dedication and distraction to bring them back to the real world. Don't worry though, it is possible. Lingerie is a great tool to have in your arsenal.

The study in question was paid for by Durex, as in the condom company that obviously has a vested interest in people getting freaky, so we can't expect they used the most scientific of methodologies. This is pure speculation, but perhaps a dearth in condom sales led the latex giant to investigate the problem at hand? No company spends money without an endgame. Either way, the results are enlightening. Other tidbits gleaned include the fact that 40 percent of people had also used smartphones to engage with their lovers, sending dirty pictures or using the video function to film themselves getting down. This essentially means that the time they're ignoring one another for their iPhones and the time they're trying to get ahold of one another with their iPhones is equal. Does this make sense, guys?

If this is a legitimate, serious issue in your own relationship, you would be perfectly justified to feel displeased. Between work or school, life, rush hour and the real world in general, those few chances at intimacy are vital. Some couples enact a "no phones after 10 p.m." rule that forces them to participate in other activities together, perhaps actually discussing their days or maybe even banging, so that's always an option. But I'm old-fashioned.

More like this
The Best Time To Date After A Breakup, According To Experts
By Bustle Editors
How To Schedule An Instagram Post
By Emma Carey
How To Turn WhatsApp Read Receipts Off
By Emma Carey
12 Cheeky Instagram Captions To Use When You Haven’t Posted In Weeks
By Emma Carey
Get Even More From Bustle — Sign Up For The Newsletter