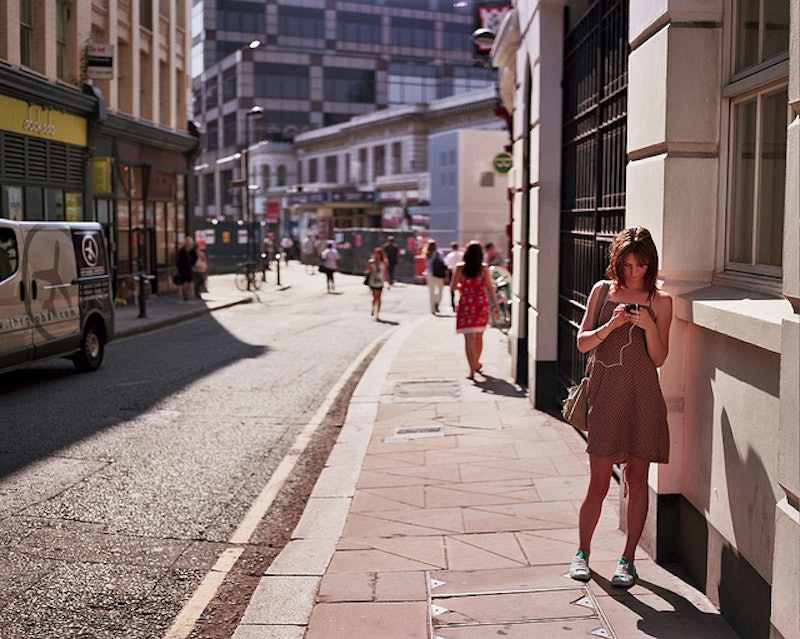 Sure, you can easily find someone to hook up with on dating apps, but can you find love on Tinder? Through my own Tinder experience, I learned that whatever standards you set, you can find the right Tinder match (and I met my last boyfriend on it after trying just about every site out there). Yes, it is an easy way for non-relationship people to get easy access (no pun intended) to others who want a no-strings-attached rendezvous, too.

I know Tinder gets a bad rap, but I know plenty of people who have met on it — and not in a hook-up-type way. I think it is like seeing a cute person in a bar or bookstore and is simply another medium to meet people. Like anything in life, it all depends on your end goal. If you’re looking for love, though, and want to find more than a fling, a partner not just a rando, there are plenty of ways to tweak your Tinder game. From having a dating "study buddy" who helps you evaluate potential matches to making sure your profile is attracting the right people, here are some surprisingly effective Tinder methods to help you find love.

1. See what friends you have in common.

I love that Tinder links to mutual Facebook friends. This makes it seem like meeting a friend of a friend (FOAF) at a party instead of an Internet vacuum of strangers, a big plus of Tinder over other sites. (Yes, I know OkCupid’s algorithms are certain people’s forte, but the FOAF Tinder aspect is huge.) Also, they say you can learn a lot about someone through the company they keep, so make sure to check out the mutual friends you and a potential match have. It’s also a great conversation-starter. And, you can always contact some of those mutual friends as your very own focus group about someone!

2. Read profiles, look at all their pictures, and have a dating “study buddy.”

Don’t just swipe on the cute people. I know you’ve done it — we all have. I know the Tinder “profiles” are only a few sentences, but as a writer, I know the power of words when I see them. I used to write online dating profiles for e-Cyrano.com and learned that so much can be said in so little. This is a big reason I love Tinder more than other dating sites — it allows us to get to the point faster versus reading long profiles. Poignant, short, and sweet.

Also, look for cues and keywords in Tinder profiles to see if they seem like a good match or not — now’s your time to be a dating detective! For instance, I avoid guys with mentions of sex or pot or excessive drinking. And I know you probably checked out the person's pictures already, but make sure you see all of them, not just the profile one. (Maybe you missed the one where they're doing a headstand and bong at the same time.) This may be a given, but look for red flags: drinking, half-clothed shots, etc. It baffles me how many of my friends complain about finding a player on Tinder and I immediately ask to see their profile and wince — the shirtless pictures, the incomplete, suggestive sentences, and so on. When in doubt, have a friend evaluate the profile with you, like a dating study buddy.

3. Make sure your profile is clear and concise.

Your mini-profile and picture (and sometimes FOAF connection) are all you have on Tinder, so make them the best they can be. Just like all those manifesting gurus out there who say “you attract the love you want,” it’s true. (Trust me, after years of dating experience, both on and offline, I know!) If you don’t want hook-ups, state it in your first sentence. People who don’t like it don’t have to swipe right and you’ll already weed many people out. The content of your profile indicates what kind of message someone will write to you. When men and women complain and tell me they attract the wrong people on it, I ask to see their profile. (In all my Tinder dating, I only received one salacious message, ever, so I do think guys read profiles!)

Also, now that you’ve seriously evaluated matches' photos, make sure yours aren’t don’t convey the wrong message, based on what you're looking for. What are you wearing in your photos? Do you have a close-up, medium shot, and a faraway shot? That’s really all you need. No friends necessary. It’s a given we all have friends. Again, this is where the mutual Facebook friends come in handy with Tinder.

In L.A., we all know the traffic’s pretty bad and I know plenty of daters who have very specific mileage radiuses in their dating profiles — they won’t go more than 10 miles or won’t cross the 405 Freeway (they consider these "long-distance relationships"; they obviously have not been in an L.A.-to-Chicago one before like I have). But this is your love life we’re talking about. Your soulmate can be 11 miles away and you missed out. Just because you expand your radius, it doesn’t mean you have to marry someone across town, but you can at least meet them for coffee.

5. It looks like a game, but take it seriously.

We all know people who grab each other’s phones and swipe left and right arbitrarily, based on absolutely nothing. But, those are the results you’ll get then: nothing. And you don’t want to get someone’s hopes up if a friend keeps playfully swiping right, do you? (Would you want that done to you?) Now, you can even pay a monthly fee to "undo" accidental matches.

Yes, this is a given, but I’m surprised how many friends complain about having few-to-no matches. How is that possible?! There are thousands (actually, millions) of people out there — and no matches?!

7. Don’t be afraid to write a match first.

Don't settle for people who only message you first. By writing to someone first, this opens you up to more possibilities. But, what do you say? See below.

It’s the principle. A few weeks ago, I helped a guy friend set up his Tinder account. A few days later, I checked in with him and asked how the matches were going and if he’s made any dates yet. He said he had matches, but hadn’t written to anyone — he didn’t know what to write. Anything! That’s the answer! Yes, it’s great if you respond to something in their profile or ask the person how they know one of your mutual friends, but you can really say anything. (Think of when someone hits on you in a bar or bookstore — what did he/she say? See!) However, make sure you ask a question because you want the person to have something to respond to.

9. Communicate as little as possible.

Yay, you have some matches! (Isn’t it an oddly satisfying feeling when you start getting them?) I know most of the world is addicted to texting and sending short Tinder messages, but that’s the problem. Texting may be fun, but it’s a false sense of fun, a fantasy, until you meet the person in real life. I think a few short exchanges are fine, then a few emails (if you don’t have any mutual Facebook friends, I’d recommend using a fake email address, one without your last name — you don’t want to be Google-able to a stranger or stalked).

You may not remember the catchy, old Ameritech slogan, “Phone first before you go,” but it’s true. You want to place a voice to the Tinder messages and make sure the guy or girl is a real person, not a Web bot. You also want to make sure he knows how to hold a conversation, or at least have more than one-word responses. (I know a lot of people are anti-talking-on-the-phone first, “not everyone’s a phone person,” but I find it’s often a great precursor to the date. You'll see.)

I think the reason so many people complain about dating is because they keep complaining about it. Instead of dreading your next date (which can be avoided with the pre-date phone call), be excited about it! After all, this could be the person for you. Or, you can make a new friend. Or, you may never speak again (I’ve have enough bad dates, too, to empathize with the complainers, but I try to see dating as a fun adventure, not as an awful duty.) Every single Tinder date I had was normal —one even stood up when I excused myself to use the restroom— but only one turned into a love connection. Remind yourself that there are tons of people out there — and it just takes one good date with someone to turn into several with that same someone.

At the end of the day, you can't force love just because an app tells you someone’s a good match. But, with Tinder, you can get to the dating faster. And dating people — even ones who don’t end up being your soulmate — is great practice for when your soulmate does come along.