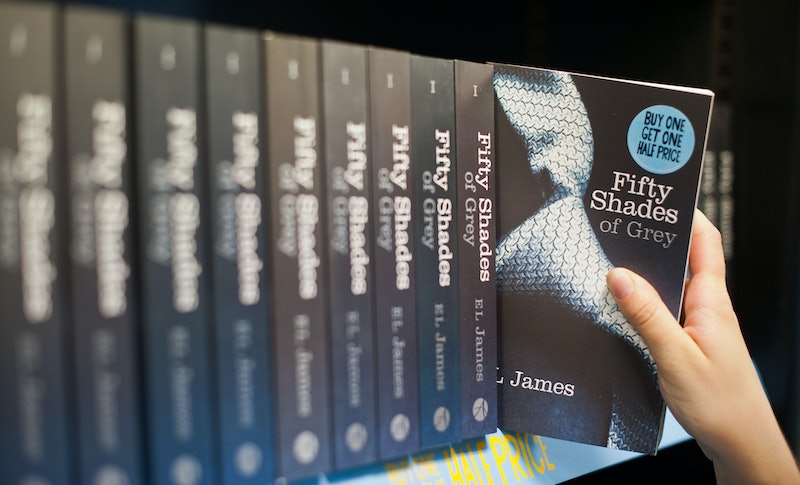 As theaters continue to show Fifty Shades of Grey, the movie that has earned more than $500 million from the global box office, we found a group of students who are neither on team Christian nor team Ana — rather, they are against the series all together. Despite the captivating prose and intricate character development featured in E. L. James’ best-selling trilogy, Fifty Shades of Grey was pulled from Boston College’s bookstore.

Boston College’s newspaper The Heights reports that after selling the series for months, the bookstore pulled the remaining novels from the shelves this past Monday. And even though the S&M love story had been innocuously sold in the bookstore for a while, students only recently began complaining about their presence. Tina Plotegher, assistant director of the BC Bookstore, told The Heights that she believes that complaints began because the movie raised awareness of what the books were actually about. Still, Plotegher said that the complaints were mere "rumblings" rather than demands to pull the trilogy.

Boston College is a Jesuit university (yes, it’s technically a university and not a college), and some complained because the book wasn’t in line with the school’s Catholic foundations and beliefs. While it seems as though the bookstore had done a pretty good job of brushing off the criticism, one complaint directly asked for the books to be removed from the store, and was filed with the bookstore and the university, leading to the end of their smut peddling. Plotegher states that the decision to pull the books was made by the bookstore in an effort not to offend anymore customers rather than a request from the university. However, that iteration of the story has been raising eyebrows.

Firstly, it seemed as though most students were more than okay with the trilogy being sold in the bookstore. When the ban was implemented earlier this week, the store was sold out of the first book and only had two copies of each the second and third books. Secondly, when I interviewed a former Boston College student (who, might I add, has seen the movie twice), she said that the college pulling the books didn’t surprise her. “Boston College definitely wants the persona of being very conservative,” she said, “even though the student body, for the most part, is liberal and accepting.” She also pointed to BC’s unwillingness to sell condoms on campus and the informal “two people three feet rule,” which refers to the expectation that if a guy and girl are hanging out in a dorm room, at least three feet should be touching the ground.

But the conservative college might have just pulled the books to avoid controversy. Boston Magazine found that an electronic version of the book is still available from the school’s library, signifying that the University might not have a problem with the sexual fantasies of E. L. James after all. Furthermore, the Boston Globe is reporting that the books (all four of them!) have been returned to the shelves of the bookstore. Apparently, BC asked the bookstore’s operator, Follett Corp., to “reconsider its decisions,” citing “the inappropriateness of banning books at a university.”

Now could BC have been attempting to do damage control after they saw the press interest in this story? Sure. Could the Boston College Bookstore actually be the censoring culprit in this situation? Yep. Here’s what we do know for sure: Boston College students love Fifty Shades of Grey, Christian will always come out on top, and BC really needs to do something about its condom policy.