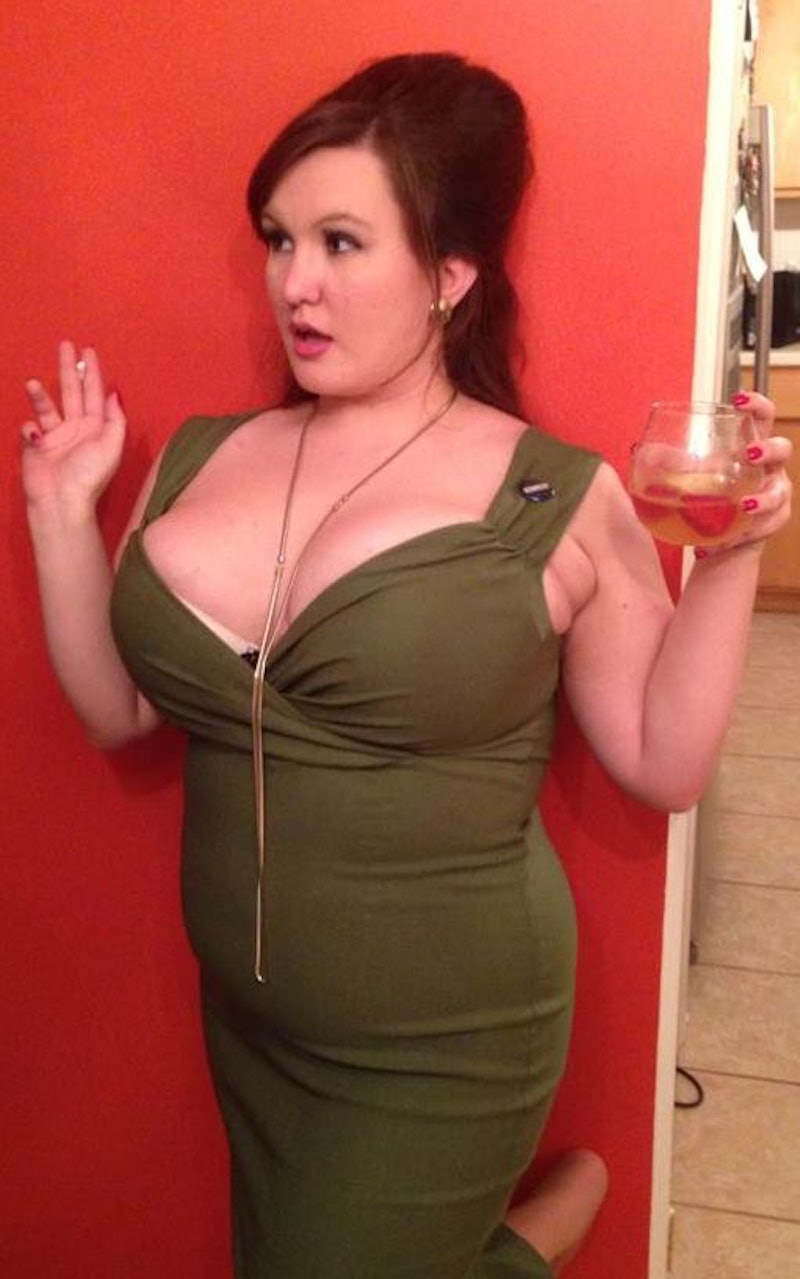 When I was a little girl, I wanted to grow breasts so badly. The women on both sides of my family are extremely well-endowed, and so I waited impatiently for the day when I, too, would be able to wear a bra. Little did I know that when my breasts finally did come in at age 11, I would grow out of training bras within three months

But being young and awkward, I've only recently come to love my extremely ample bosom. Once a source of utter embarrassment for me, I’ve come to love my breasts like old friends. They are my constant companions, after all. But it took work — because when you’re a woman with a chest so large that it almost dominates your appearance, it’s hard to bust through the immediate assumptions people make about you, based on your breasts. After all, for centuries, most cultures have believed that there was a tie between a woman's chest size and her sexuality. But having a large chest doesn’t automatically make you Jessica Rabbit. I’ve had to work hard to convince friends that I wasn’t out to steal their boyfriends, or show employers that I wasn’t going to sleep with the other employees — assumptions they made just based on my breasts.

I didn’t ask for these breasts; they came with the package. But I shouldn't have to hide under a nun's habit because people are made inappropriately nervous by them, either. If I can pass on some of the small lessons I’ve gleaned from carrying a literal weight on my chest for the past decade and a half, then it’s all been worth it. I’ve made plenty of mistakes along the way, but hopefully, by sharing these four lessons with you, my fellow well-endowed lady friends, you won't have to go through all of the same struggles that I did.

1. It Takes Time To Figure Out What To Do With Them

In junior high, I wore sports bras every day, instead of the underwire bras that my friends and family told me I should have been wearing. I would push whatever clothing I was wearing up and underneath my breasts and walk around with a huge crease in the middle of my shirt — mostly because I really hated boob sweat, but also because I somehow thought it looked cool. I even did it in my school photo that year.

I've made quite a bit of progress with my boob-styling since them, but to this day, I’m still figuring out how to flaunt my goods in a manner befitting them. It’s a daily struggle to make sure I’m not falling out of my top, spilling over the edge of my bra, or generating enough friction to keep the house lights on.

But in the end, I go with the outfit I feel best in, not what someone else tells me I should be wearing. If I think I look good, then I’ll project that confidence out into the world. Personally, I don't care to go without a bra, but I know some people do. I also really like the bodycon trend, and though I've had lots of people (OK, mostly my family) tell me that bodycon fashions make me look like I'm selling "something," honestly, who cares, so long as I like what I'm wearing? I don't care what other people think my love of my breasts indicates; I only care about how I get along with them.

2. Large Breasts Are Neither All Positive Nor All Negative

Most movies and TV shows that deal with the subject would have you believe that large breasts are either a total blessing from the universe, or a complete pain. But they're neither — in my life, having large breasts has had both positive and negative impacts on my life. As I’ve come to love my body as a woman, I’ve had to learn to love my breasts, too. I know I’ll never have perky breasts like some of my girl friends, and I’ll never feel comfortable wearing most of my clothes without a bra on. Swimsuit shopping has literally caused me to break down and cry, and halter tops give me awful migraines. But I can totally fill out an evening gown or a bustier, and that’s not a half bad trade, if you ask me. It’s all about trying to find the things about your body that make you happy. If I’m constantly worried about how I look, then that doesn’t leave a whole lot of time to just go out and enjoy my life, does it?

There’s a whole list of things I don't feel comfortable doing due to my breasts — public jumping jacks being number one — and there’s a lot of stuff you’d never even realize is a problem for large-chested women. Sleeping on my stomach or back usually means slowly suffocating myself in one way or another; I can’t bend over easily without falling out of my bra; I’m constantly tucking my breasts back into place throughout my day; and older people have actually pulled me aside to lecture me about the amount of cleavage I have showing in totally normal outfits. (When you have six miles of cleavage, t-shirts just don’t fit the same way on you as they do on everyone else.) I’ve actually resorted to binding them with bandages before, and the freedom of being able to run jump and skip like a normal person (aka without bouncing every which way) was mind-blowing. I think I would constantly be doing jumping jacks if I was an A-cup.

Big breasts are simultaneously revered and reviled in our culture. If you have them, you're considered lucky, but you also need to hide them lest you be considered "loose." What the hell, society? They're literally just bags of flesh (as creepy as that sounds, it is factually accurate!) Stop assigning so much of my personality or success to them. No one thinks your business capability lies in your shoulders, or your sexiness is dependent on your ankles. Stop acting like my breasts are anything other than just another body part.

3. Guys Don't Always Remember That My Eyes Are Up Here

Ever since my ladies reached critical mass around 9th grade, I’ve frequently had awkward conversations with men and boys alike. I’ve known several men who would look away from me when they spoke to me, and many of them later admitted that it was because they had no idea where to look. (Uh, how about my eyes?) They’re the first thing about me that gets pointed out by catcallers, and the last thing anyone wants to actually talk about with me.

But as long as you’re respectful about it, I personally have no problem discussing the size of my chest. That may seem weird, but to me, it’s like discussing the color of my eyes or my current hairstyle. They’re just another part of me, another aspect of my physical appearance, not the mystical orbs that some people seem to think that they are. Being nonchalant about something that makes people awkward is the best way I’ve found to deal with potentially embarrassing situations.

I can't tell you when it's appropriate to talk about them, because that's something you have to decide for yourself. If you don't want to discuss them ever, then don't. If you find some camaraderie in discussing them with a similarly blessed-in-the-chest stranger, then go for it. If you want to be able to talk about 'em with all sorts of people, then push through that discomfort and just be open for awhile. The line you don't actually want to cross will become clear, and in the meantime, just be open and honest with people about what you're not willing to talk about. Just remember that, unfortunately, there’s always going to be people out there that don’t know how to act like normal humans around your large chest. My advice is to brush it off and do your own thing.

4. You Can Become Comfortable With Your Body (Even If It Feels Like An Uphill Battle Sometimes)

A few years ago, I joined a Rocky Horror Picture Show troupe, and the comfort that the other cast members felt with their own bodies totally floored me. (Though I suppose when you get mostly naked in front of an audience every week, you learn to get comfortable with your body very quickly.) As I worked with the troupe, I opened up more, spoke about things that I had once considered taboo, and even started occasionally performing. My body (and especially my breasts) began to feel less like an alien appendage that I had no idea what to do with, and more like just an extension of myself. It felt great to be able to present myself — size 16 with size F chest — as someone who was sexy and worthy of being desired. My comfort with stripping — as much as it pains my mother to hear this — played a large part in accepting my breasts for what they are.

I used to joke that my breasts "weren’t good for anything" since I didn’t have a boyfriend to appreciate them and I didn’t have a baby who needed them for food. I now realize that that’s just stupid — because I appreciate my breasts, and I want them. I’m happy to be a woman with these curves, and I think they make me unique and beautiful. It took me a long time to realize it, but as long as I love my breasts, who cares what anyone else thinks?

Look, ladies: I'm not saying you have to strip or start talking to strangers about your breasts in order to get comfortable with them. That just happened to be my crazy little path toward body acceptance. I wish I could give you a cure-all for confidence issues, but that's just not possible. All I can tell you is this: you've been given a unique gift, even though it can sometimes also feel like a curse. The best advice I can possibly give you, dear reader, is this: Love thy boobies and thy boobies will love thee.