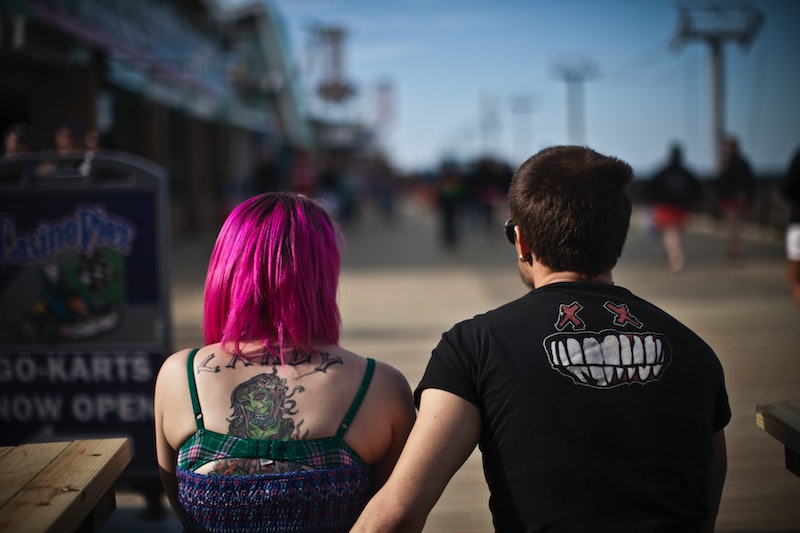 Breaking up is usually the worst. I mean, if the relationship is bad and it was coming, then power to you both. If the feeling isn't mutual, though... well, that's when things get painful.

My own first break up was pretty grim. I wouldn't give all of my time to the guy, and he just wasn't having it anymore. He'd follow me home and be pouty and jealous when I hung out with my friends. I did the slow-fade, which I know isn't the nicest, but I was only six. I didn't know know any better. (Yes, we were six: One time we tried to kiss, but our lips were tucked into our mouths so much that basically only the skin around our mouths bumped together.)

In all seriousness, though, breaking up sucks. And usually it's cliché, and you feel like you're stuck in a bad movie (or an awesome rom-com that you used to like but that will now forever remind you of your breakup). I promise, though, that you can find a little levity in your situation in one of the least likely places: looking at other well-thought-out breakup lines. They're not fun when they're aimed at you, of course, but when they're being said by fictional characters, they provide plenty of catharsis.

Here are some of the sharpest, most iconic, and wow-worthy breakup lines in lit:

Gone With The Wind by Margaret Mitchell

"Scarlett, I was never one to patiently pick up broken fragments and glue them together and tell myself that the mended whole was as good as new. What is broken is broken — and I'd rather remember it as it was at its best than mend it and see the broken places as long as I lived. Perhaps, if I were younger—. But I'm too old to believe in such sentimentalities as clean slates and starting all over. I'm too old to shoulder the burden of constant lies that go with living in polite disillusionment. I couldn't live with you and lie to you and I certainly couldn't lie to myself. I can't even lie to you now. I wish I could care what you do or where you go, but I can't... My dear, I don't give a damn."

At least he's being honest.

Winnie the Pooh by A. A. Milne

“You are braver than you believe, stronger than you seem, and smarter than you think. But the most important thing is, even if we’re apart … I’ll always be with you.”

Gee, Christopher Robin, way to lead Pooh on... now he's going to wait for you forever. Not OK, man.

“We can’t continue to be like this. Who am I? Your fiancée or your concubine?”

“I’ve seen men like you in Doris Day films, but I never thought they existed in real life …The men who can’t commit, who can’t say ‘I love you’ even when they want to, who start to cough and sputter and change the subject. But here you are. A living, breathing specimen. Incredible.”

It's true, they exist, and this woman's awesome for calling them out.

How Stella Got Her Groove Back by Tracy McMillan

“…being in your presence for any length of time depresses the hell out of me and I don’t need this shit who needs this shit so I’m like out of here.”

The Ragged Way People Fall Out of Love by Elizabeth Cox

“I don’t love you anymore … It comes down to that, I think.”

“I think you’re a wonder. You’re beautiful. You’re mature. You are, I admit, vastly more experienced than I am. That’s what threw me. I was thrown. Forgive me.”

A little hippie dippy, but also (hopefully, am I right?) true.

Unapologetically You: Reflections on Life and the Human Experience by Steve Maraboli

“I will not try to convince you to love me, to respect me, to commit to me. I deserve better than that; I AM BETTER THAN THAT...Goodbye.”

Now that's how you do it.

The English Patient by Michael Ondaatje

“You think that you are an iconoclast, but you’re not. You just move, or replace what you cannot have. If you fail at something, you retreat into something else. Nothing changes you ... I left you because I knew I could never change you. You would stand in the room so still sometimes, as if the greatest betrayal of yourself would be to reveal one more inch of your character.”

It's rare that you can change anybody, really.

Reflected in You by Sylvia Day

“You put me through hell. On purpose. Made me suffer. And there’s no end in sight. I don’t know what the fuck you’re doing, ace, but this Dr. Jekyll and Mr. Hyde shit ain’t cutting it with me.”

The double act is the worst.

“And I was — this is just how I was afraid you'd take it. I knew it, that you'd think this means you were right to be afraid all the time and never feel secure or trust me. I knew it'd be 'See, you're leaving after all when you promised you wouldn't.' I knew it but I'm trying to explain anyway, okay? And I know you probably won't understand this either, but — wait — just try to listen and maybe absorb this, okay? Ready? Me leaving is not the confirmation of all your fears about me. It is not. It's because of them. Okay? Can you see that? It's your fear I can't take. It's your distrust and fear I've been trying to fight. And I can't anymore. I'm out of gas on it. If I loved you even a little less maybe I could take it. But this is killing me, this constant feeling that I am always scaring you and never making you feel secure. Can you see that?”

That's one way to look at it, sure.

“Don’t ignore me while I’m trying to break up with you!”

Why We Broke Up by Daniel Handler

“I'm dumping the whole box back into your life Ed, every item of you and me. I'm dumping this box on your porch, Ed, but it's you, Ed, who is getting dumped.”