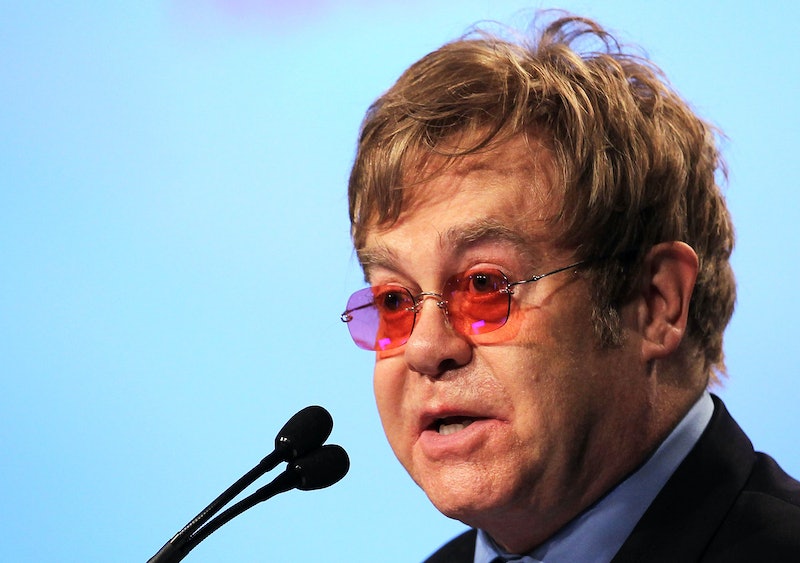 Earlier this week, it was learned that powerhouse Italian brand Dolce and Gabbana made some questionable comments surrounding babies conceived via In Vitro Fertilization — and it doesn't look like the backlash caused by this commentary is going to ease up anytime soon. Sir Elton John is calling for a boycott against Dolce and Gabbana and I hope he's not the last to speak out about the rights of couples hoping to start their families through IVF treatment. John posted a photo of the pair of designers on Instagram with a passionate statement about his love for his children (conceived through IVF) whilst utilizing the hashtag #BoycottDolceGabanna. "How dare you refer to my beautiful children as 'synthetic,'" he wrote.

Dolce and Gabbana said earlier this week that they felt IVF was "unnatural." Founders Domenico Dolce and Stefano Gabbana told Panorama magazine, "The only family is the traditional one. No chemical offsprings and rented uterus: life has a natural flow, there are things that should not be changed.” Many were shocked at the pair's declaration, considering that they are both gay themselves and have actually been life partners for decades. Elton John fired back at that comment in his Instagram post, stating, "And shame on you for wagging your judgmental little fingers at IVF — a miracle that has allowed legions of loving people, both straight and gay, to fulfill their dream of having children."

Dolce and Gabbana have yet to release an official apology, but have reportedly called the singer "fascist" for his boycott and coined the hashtag #boycotteltonjohn instead. One thing's for sure: Boycotting someone who makes hurtful and harmful comments isn't fascism. And making disparaging comments about the way people choose to make a family isn't fashionable.

More like this
The David Beckham Qatar Controversy, Explained
By Sophie McEvoy
Olivia Colman Is Supporting Her On-Screen Son Kit Connor In The Sweetest Way
By Catharina Cheung and Darshita Goyal
Kit Connor Speaks Out On “Shocking” Lack Of Bisexual Representation
By Sam Ramsden
Kim Kardashian Is “Disgusted & Outraged” By Balenciaga Ads
By El Hunt
Get Even More From Bustle — Sign Up For The Newsletter