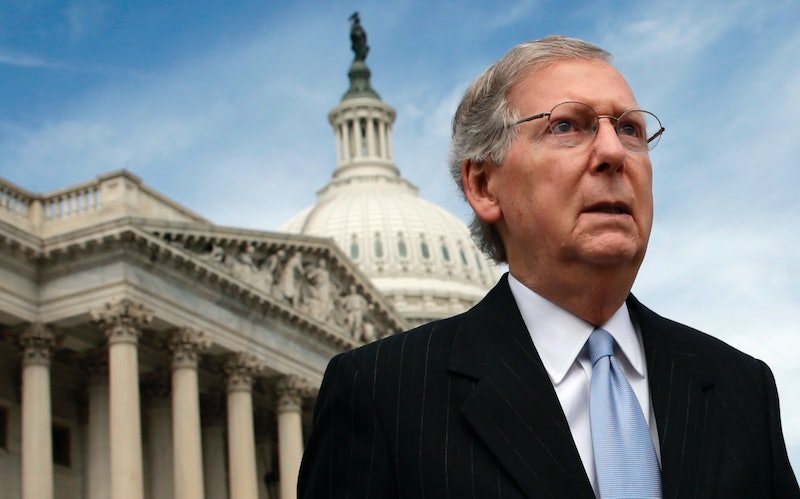 Apparently the U.S. Senate Majority Leader is having a hard time multitasking. Mitch McConnell says he'd rather stop the confirmation of attorney general nominee Loretta Lynch in favor of focusing on passing a human trafficking bill through Senate. The human trafficking bill, while in abstract seems a sure bet to pass, has become its own separate, partisan issue thanks to a mixture of senators failing to read its 68 pages and those who'd written it poorly disclosing an important anti-abortion provision.

Sponsored by Republican Senator John Cornyn, the bill was meant to establish a victim's fund using money paid out by fines levied against those convicted of human trafficking. Its language against providing funding for reproductive health options like abortion is what now makes the Justice for Victims of Trafficking Act doomed to fail. The bill is set to be voted on this Tuesday, and McConnell says only after that will he focus on Lynch's confirmation.

In an interview on CNN's State of the Union, McConnell repeatedly stressed an order of operations that prevents him from making a decision on Lynch's confirmation. Says McConnell:

McConnell is currently undecided on Lynch's confirmation though it appears that Republic senators Orrin Hatch, Jeff Flake, and Lindsey Graham all support her while senators John Cornyn and Roy Blunt will be voting against her. Both supporters and detractors mark a strong contrast against McConnell's indecisiveness, signifying an impatience at the myriad delays that have kept Lynch as merely a nominee for nearly half a year.

For months and months, Republicans have failed to move forward with‎ her nomination using any excuse they can, except for any credible objection to her nomination itself. Loretta Lynch, and the American people, don't deserve this. At a time when terrorists from ISIS to Al-Shabaab threaten the United States, the nominee to be attorney general deserves an up or down vote.

By all accounts, McConnell might very well make up his mind against Lynch, as he has indicated that Lynch's siding with Obama's immigration policies are a point against her. It's an unsurprising fact, since Obama was the one to nominate her, but hopefully a decision is made soon.