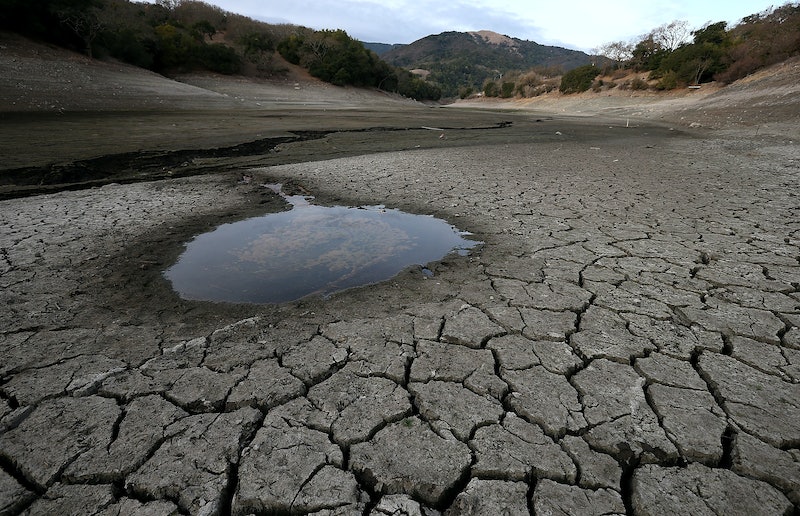 A new report by the National Aeronautics and Space Administration (NASA) has some pretty dismal news: California only has enough water in storage to make it through the next year. The state’s stored water supply has been dwindling since even before the days of drought, but now that California is experiencing some of its driest weather ever, the water situation is looking grim — really grim. Southern California is planning to begin water rationing this year, but who all will that affect?

This January was California’s driest on record since 1895 — and that was supposed to be one of the state’s “wet” months, the Los Angeles Times reports. This means that the state’s back-up plan for water, groundwater, is even in trouble. According to data from recent satellites, the amount of water in the Sacramento and San Joaquin river basins measured 34 million acre-feet below the average levels last year.

But though the drought definitely isn’t making the situation look so good for California, the water shortage started long before the droughts did. NASA satellite images found that water in California has been on the decline since 2002. Since 2011, water levels have been dropping even more rapidly, totaling a loss of more than 12 million acre-feet of total water each year, the Los Angeles Times reports.

So, where is all of this water going? An estimated two-thirds of it is being lost to agriculture. When droughts occur, farmers have to tap into the groundwater supply to irrigate their crops. The drastically slashed allocations of surface water increase farmers’ dependence on groundwater.

But as the drought continues with no end in sight and the water situation become all the more dire, allocations and rationing will only become more of a norm. In February, Southern California's Metropolitan Water District proposed the possibility of mandatory water rationing measures this summer if conditions don't improve. Everyone would be affected; the rations would include limiting water deliveries and the amount of water that people can use and would extend to domestic, agricultural, industrial, and municipal uses.

According to an LA Times op-ed by Jay Famiglietti, a senior water scientist at NASA, the rest of the state should follow Southern California’s lead if they don’t want to wave goodbye to water. Moreover, Famiglietti recommended that states work more rapidly than they are right to create groundwater sustainability agencies, so they can better preserve their groundwater and have a more dependable backup source for droughts in the future. At the rate they’re working right now, he says, too much water will be gone by the time plans are implemented.

At this point, California doesn’t seem to have much of a backup plan for its water supply, which is most definitely a cause for concern. Famiglietti critiqued that all the state seems to be doing right now is hoping for rain and thinking about how to conserve the water they still do have.

It’s easy to take things for granted — until it's gone. California clearly needs to act fast and to think hard about how the state can conserve its water and maintain a backup supply. Because if that doesn't happen, Californians will certainly be wishing that they did in just a year.